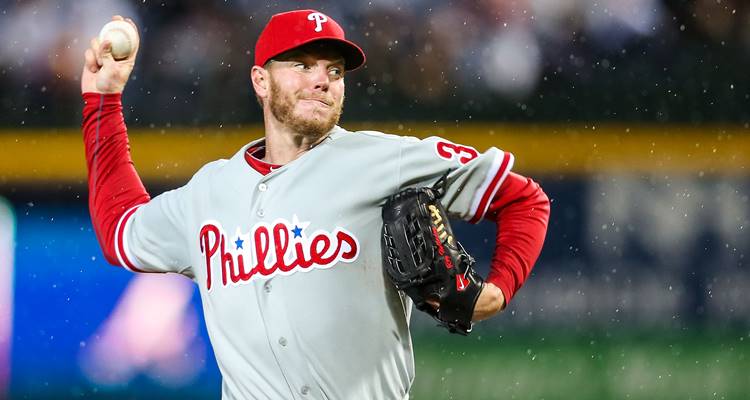 Roy Halladay, an ex-MLB All-Star pitcher, died early Tuesday afternoon at the age of 40. Roy Halladay’s plane crashed in the Gulf of Mexico, just off the coast of Pasco County, Florida.

Roy Halladay, an eight-time MLB All-Star pitcher, met his fate in a plane crash on Tuesday. The tragic incident occurred at around 12:00 noon EST, in the Gulf of Mexico, just off the coast of Pasco County.

Officials confirmed that Halladay was the only person on the two-seater plane that crashed just off Holiday, on Florida’s Gulf coast north of the Tampa Bay area. And, the devastating incident has shocked his fans.

Let’s have a look at his life’s journey in Roy Halladay’s wiki.

Nicknamed “Doc,” Harry Leroy Halladay III was a professional baseball player who pitched for the Toronto Blue Jays and Philadelphia Phillies in Major League Baseball between 1998 and 2013.

In the 1995 Major League Baseball draft, Halladay was the Blue Jay’s first draft selection and the 17th pick overall. He played for the team from 1998 to 2009. After that, Halladay joined the Philadelphia Phillies.

Halladay was known for his skill to pitch deep into games effectively. He received the Cy Young Award twice during his career. He first won it in 2003 as a member of the Toronto Blue Jays and in 2010 when he was with the Philadelphia Phillies.

Roy Halladay was born in Denver, Colorado but grew up in Arvada. His father was a pilot for a food processing company, while his mother was a homemaker.

In 1995, Halladay graduated from Arvada West High School. He was known to have loved baseball since a very early age.

Roy Halladay’s Cause of Death

Roy Halladay died on November 7, 2017, after his new 2018 model ICON A5 amphibious plane crashed into the Gulf of Mexico off the coast of Florida. The news was confirmed by the Sheriff’s Office in Pasco County.

In the past, he had tweeted his joy and excitement about acquiring this plane, which was registered in the name of his father who is a retired pilot.

I have dreamed about owning a A5 since I retired! Real life is better then my dreams!! Thx Kirk & everyone @ICONAircraft pic.twitter.com/wkk6TtjAY4

Roy Halladay’s wife, Brandy Halladay, lives with their two children in Tarpon Springs, Florida. He lived with them during offseason.

Roy Halladay’s kids, Ryan Halladay and Braden Halladay, are extremely dear to both him and his wife.

After he retired, Halladay coached his son Braden’s school team. And, he was also a coach for his son Ryan’s under-13 team.

So proud of every single player on my 13u Florida Burn team! 2nd strait tournament win! USSSA 13u State Champs! pic.twitter.com/GV2WJjNNIz

Halliday and his wife were involved in a lot of charity work for underprivileged children. While he was a member of the Toronto Blue Jays, the couple had invited the children at Hospital for Sick Children and their families into “Doc’s Box” at Rogers Centre during Blue Jays games. The team had even donated $100,000 to Jays Care Foundation as a part of his contract.

Roy Halladay’s net worth is estimated at $70.0 million. His salary was approximately $20.0 million.

While nothing is known about Roy Halladay’s Instagram presence, he was active on Twitter and kept in touch with his fans as often as possible. He tweeted about his personal and professional life and posted pictures.

Life is all about perspective and how you choose to see things and your attitude toward them! Broke down on the Hwy or a day at the beach? pic.twitter.com/J4ifpTbXPv

While Roy Halladay’s sudden and tragic death is a huge blow, it makes us think how unpredictable life is. We pray that his family and dear ones have the courage to cope with this difficult situation.

May Roy Halladay rest in peace.