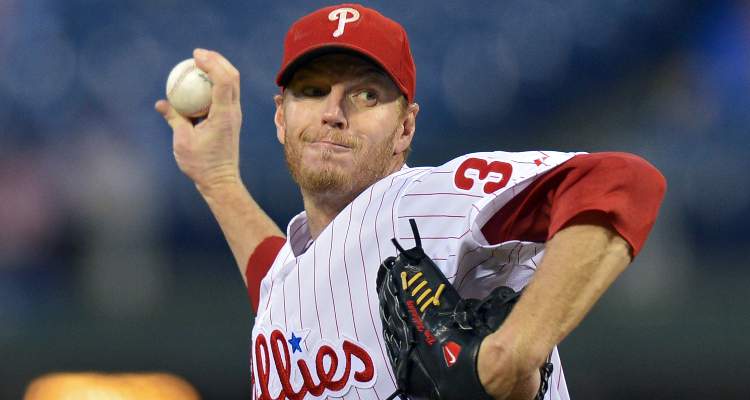 Former MLB player Roy Halladay, who died in a tragic plane crash in 2017, was posthumously inducted into the Baseball Hall of Fame on Sunday (July 21). His widow, Brandy Halladay, appeared at the ceremony along with their two sons to pay a touching tribute to him.

On November 7, 2017, the world of baseball mourned the tragic passing of former Toronto Blue Jays and Philadelphia Phillies pitcher, Roy Halladay. The retired MLB player died when the amphibious aircraft he was flying crashed into the Gulf of Mexico.

A Love Story for the Books

Born Brandy Lyn Gates, the former WAG was a resident of Arvada, Colorado, the same suburb where Denver-born Halladay was raised. They went to the same church with their parents and met when they were children.

They lost touch in high school when the Gates family moved out of Colorado. But they moved back in 1996 and Brandy and Roy reconnected. They began dating this time and two years later, tied the knot.

They moved to Florida after their wedding, and later to Toronto, Canada when Halladay was signed by the Toronto Blue Jays. They have two sons. Their eldest, 18-year-old Braden, follows his father’s footsteps and is a pitcher while their youngest son, Ryan is about 15. 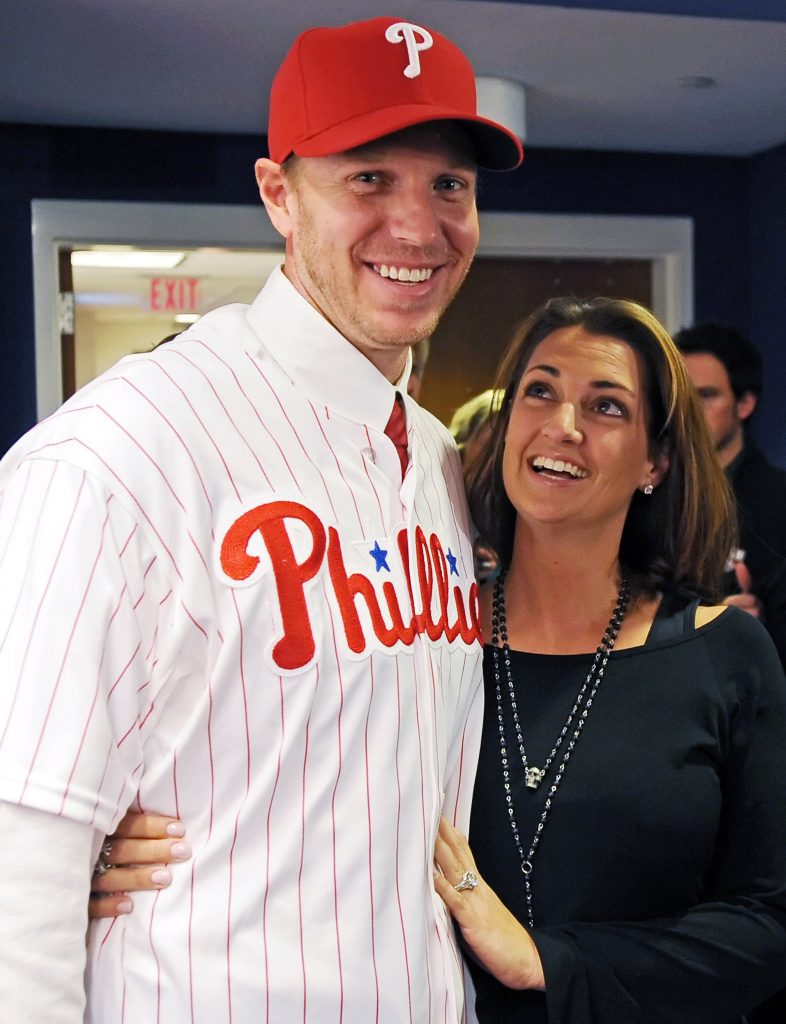 Behind Her Man’s Success

In 1995, Halladay was drafted by the Blue Jays straight out of high school. But his professional start wasn’t as successful as he expected. After recording the worst stats in the franchise’s history, then 23-year-old Halladay was demoted to Class A ball.

He couldn’t handle seeing his career on the verge of decline. The Halladays weren’t sure if they had enough savings for Roy to quit baseball and return to school while raising their six-month-old son. Knowing her husband couldn’t live without baseball, Brandy looked for one last push to keep him in the game.

She bought books such as The Mental ABC’s of Pitching by H.A. Dorfman, and encouraged her husband to maintain two journals—a personal repository of feelings, and a professional journal to track his goals.

Brandy’s gesture was enough to pull him out of his slump and get back to the game—and wow! After a breakout season, he signed lucrative contracts with the Blue Jays and the Philadelphia Phillies, and became one of six pitchers in baseball history to win the Cy Young Award.

What?? I got something BEFORE my tech obsessed husband?! This is killing him!! Mwahahahaha!! pic.twitter.com/AGE0TlUclw

Brandy Halladay is rarely active on Twitter, except when it comes to supporting her aspiring baseball player son, Braden.

On March 5, 2019, she retweeted a video of Braden striking out a batter from an opposing team, saying, “I’m never on Twitter but this was worth the retweet! Love my boy! So proud of his hard work and determination. Can’t wait for Penn State baseball!”

I’m never on Twitter but this was worth the retweet! Love my boy! So proud of his hard work and determination. Can’t wait for Penn State baseball! https://t.co/QAk5K9ktGU

She also recently retweeted Braden’s tweet thanking the Blue Jays organization for drafting him in the 32nd round in June.

Although very little is known about Brandy’s personal life, one thing is abundantly clear: she’s a strong woman and an amazing mother who loves and supports her children unconditionally.  She’s also a huge animal lover and animal rights advocate who has a particular soft spot for horses and canines.

Growing up in Oregon, she began riding horses at a young age. “My parents were students at Oregon State and we lived on campus until I was almost six. I would often go to class with my parents, but loved going to my mom’s equitation class.” At her mother’s class, she would ride a horse named Cricket with her instructor as she taught the class.

Dreaming of owning her own horse one day, Brandy saved up money for a “horse fund.” Finally, she got her own horse when she was 12. But moving around with her family meant she couldn’t keep a horse and didn’t have any formal riding lessons.

Flew a Dog Rescue trip to Alabama for two 5m old puppies who's ears were cut off w/ scissors to prep them as practice for dog fighting!! SAD pic.twitter.com/A6EYYFGoT5

It wasn’t until after they married that Roy surprised her with a saddle and told her to pick out a horse. She finally found her horse, Supreme Detail, with whom she won amateur championships.

She owned many horses in her lifetime and took riding classes to keep her passion alive. She’s also active with the Rescue a Dog organization which saves dogs from euthanasia.

She Didn’t Want Halladay to Fly the Plane

The 40-year-old pitcher loved sharing pictures of his ICON A5 amphibious aircraft on Twitter, and spoke about his love for flying. He dreamed of flying for a long time but only found the time to acquire his pilot license after retiring from the league in 2013. A month before his death, he purchased the ICON A5.

The aircraft company created a promotional video when he purchased the plane. The YouTube video has been removed since news of Halladay’s death, but it has already gone viral.

In the video, Roy and Brandy’s exchange was filmed, and his wife didn’t share his enthusiasm about flying.

“I didn’t grow up with airplanes,” Brandy remarked. “Or a comfort level like he did in small airplanes.”

“She’s fought me the whole way,” Roy said to which Brandy added, “Hard. I fought hard,” adding, “I was very against it.”

But ultimately, Brandy gave in after Roy took her on a ride,“I get it, I get it,” she said. “This is amazing … Now that we’re going to have one I’m really excited.”

You can check out the video of Roy and Brandy Halladay’s below:

Baseball fans are still reeling from the emotional tribute Brandy Halladay passionately delivered in front of a large crowd at the National Baseball League Hall of Fame Induction ceremony on July 21.

Wiping away tears and met with an enthusiastic standing ovation from all attendees including Roy’s 2019 Hall of Fame classmates, Brandy delivered a moving speech that perfectly summed up her beloved late-husband’s athletic career as well as his abilities as a loving and dedicated family man.

She started off by saying, “I knew I was going to cry at some point. I never know what it is that’s gonna get me.” Referring to the tribute video that was shown moments before her speech, Brandy said that she couldn’t watch it during that moment, but would appreciate if someone could send her a copy so she could watch it later on.

After thanking all of Roy’s teammates and the other players who were being honored, Brandy went on to say, “Anybody who thinks baseball truly isn’t a family has never been involved in baseball. I know how honored Roy would be to be sitting here with such accomplished men who have represented this game so well over the course of all of your careers. Thank you for being such a good example to him and [for] supporting him in his career and all of his efforts.”

After a momentary pause to collect herself, Brandy went on to say, “This is not my speech to give. I’m gonna do the best I can to say the things I believe Roy might have said or would have wanted to say if he was here today.”

The footage of the event showcases thousands of baseball fans celebrating the life and career of Roy Halladay, with many people wearing sports memorabilia, foam fingers, and large banners sporting his name, likeness, and number 32.