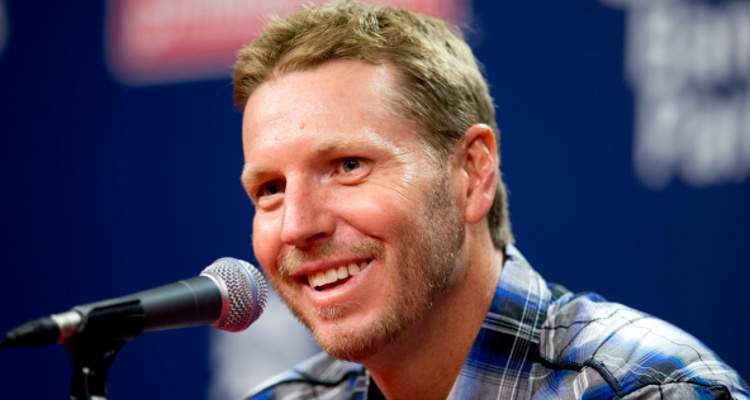 The world of baseball is mourning the loss of former Toronto Blue Jays pitcher, Roy Halladay who died in a plane crash. The tragic incident left a lull among fans, who are now wondering about his family and their situation. Roy Halladay left behind an estimated net worth of $70.0 million and a void that can never be filled.

In a devastating accident, Roy Halladay’s plane crashed in shallow waters near the Gulf of Mexico. He is survived by his wife, Brandy Halladay, and his kids, Ryan and Braden. Halladay was a star pitcher for the Blue Jays and Philadelphia Phillies. Now, only a legacy remains to carry his fame forward.

Read all about the beloved MLB star right here.

How Rich Was Roy Halladay?

Halladay was a fan favorite from the beginning of his baseball career back in 1998, when he was an amateur draft pick by the Toronto Blue Jays until 2013 when he retired due to injury.

Roy Halladay’s net worth was estimated at $70.0 million at the time of his death. He earned a salary of $20.0 million alone with the Phillies.

Here is a look at his illustrious earnings through awards:

Larry Leroy Halladay III was born on May 14, 1977, to corporate pilot Harry Halladay, who worked for a food-processing company. He was raised in the suburbs of Denver, Colorado, and was passionate about flying, just like his father.

But Halladay was also interested in baseball since he was very young. By the time he was 14 years old, he was already on the field trying to figure out his moves and actions. Major league scouts became interested in him, so he trained under Bus Campbell, who tutored many future champs in the Denver area like Goose Gossage.

Roy Halladay went to Arvada High School and graduated in 1995. Shortly after, he was the 17th overall pick in the first round of the amateur draft by the Toronto Blue Jays. Three years later, he was promoted to the major league club, and the rest was history.

Halladay played with the Toronto Blue Jays from 1998 to 2009. In his impressive term with them, he showed some class skills as a pitcher since his first game against the Detroit Tigers. He was soon nicknamed “Doc, ” and the number of Halladay’s fans grew with every game.

Former Toronto Blue Jays pitcher Roy Halladay passed away in plane crash today at the age of 40. We join in mourning the loss of a great athlete who brought joy to millions of Canadians. Thoughts and prayers are with those he left behind.

By 2000, he earned a 10.64 run average, and his fastball went at 95 miles per hour. But his pitches were in the strike zone, and as a result, he trained under former Blue Jays pitching coach, Mel Queen. In just two weeks, Halladay rectified his arm angle and started pitching from three quarters instead.

His new style of pitching helped him greatly in his future games. He was called to the American League All-Star team in 2002.

By the mid-2000s, Halladay was given the Cy Young Award for his amazing skills. He was also named an All-Star after leading the Blue Jays to a total of 86 wins.

An All-Star Player with Injuries Galore

Halladay’s peers named him American League outstanding pitcher for the Players Choice Awards and his titles just kept on coming.

In 2004, shoulder problems led him to be placed on the disabled list, which was the result of a tired throwing arm during intense practice sessions. But he jumped back into action the next year and was chosen to play his third All-Star game in Detroit as a starting pitcher.

Sadly, Halladay broke his leg and was asked to sit out of the All-Star game. He was replaced by Matt Clement, and Halladay sat out for the whole season.

In 2006, he signed a contract worth $40.0 million, which would see him through to the 2010 season. And although Halladay’s pitching wasn’t as strong, he was still a valued player and had won pitcher of the month in April 2007.

But, he had to tackle issues with injuries once again, and returned to the disabled list for his appendectomy.

In 2008, in a game against the Pittsburgh Pirates, Nyjer Morgan hit a ball that struck Halladay’s temple and bounced off. It was caught by baseman Scott Rolan, ending the inning.

Halladay may have suffered a temporary lapse of recognition in that game, but he was deemed healthy to play on. However, due to safety reasons, he was asked to sit in the dug-out for the rest of the game.

The same year, he pitched his 38th career complete game and was yet again called to the All-Star team as a reserve. He became the fourth pitcher in the history of MLB with two seasons of 200 strikeouts and less than 40 walks. Halladay even won the George Gross Sportsperson of the Year Award, which helped boost his career the following year.

In 2009, Halladay was plagued with yet another injury and placed back on the disabled list. But, he managed a 24-inning scoreless streak and was named as pitcher for the All-Decade Team by Sports Illustrated.

The Home Stretch to Retirement

The last three years of Roy Halladay’s baseball career proved to be more about his quality in pitching and less about his fame and popularity. He joined the Philadelphia Phillies as the Toronto Blue Jays traded him for minor league prospects Michael Taylor and Kyle Drabeck.

The star player pitched a perfect game, striking out 11 batters and retiring all 27 of them allowing zero hits. This was the first in modern-day MLB, and the celebrations never stopped. Halladay was being congratulated by every known face in the franchise.

To celebrate, Halladay bought Baume and Mercier watches for everyone at the clubhouse. Every watch was custom engraved at the back with each of their names and the box read, “We did it together.” Now that’s how you celebrate a record-breaking game win!

When Roy threw his perfect game, he bought about 60 watches to commemorate the occasion each engraved and personalized. The case had a plaque that read "Couldn't have done it without you. Thanks" – Roy Halladay#FirstClass #LeadersLead #R.I.P.Doc pic.twitter.com/hoXNoAIFDX

By the end of 2011, Halladay was named Sportsperson of the Year twice in a row. But by 2013, when he was 36 years old, his record struggled a bit due to another shoulder injury.

Roy Halladay recorded his 200th win in the game against the Miami Marlins, which was one of his last games before retirement. The Phillies defeated the Marlins 2-1, and Halladay pitched eight innings, allowing only an impressive one run.

On December 9, 2013, Roy Halladay said his final goodbye as an MLB player after signing the ceremonial one-day contract with his previous team, the Toronto Blue Jays. He retired due to injury but was still a part of the Phillies and the Blue Jays as a guest instructor.

Roy Halladay left behind his wife, Brandy Halladay. He also had two kids, Ryan, 13 and Braden, 17.

Halladay was always passionate about flying. His dream was to own an ICON A5 plane, which he purchased just a month before his crash. Halladay was very excited about the purchase and posted pictures of himself and his aircraft on Twitter.

One of posts was captioned, “Can’t begin to explain all the breathtaking views I have seen thru the open windows of demo’s & now my very own Icon A5! Thx to all at Icon! [sic]”

I have dreamed about owning a A5 since I retired! Real life is better then my dreams!! Thx Kirk & everyone @ICONAircraft pic.twitter.com/wkk6TtjAY4

Roy Halladay’s wife was against him buying a plane and fought with him throughout the entire buying process. She was just not comfortable with the idea.

But he went ahead with the purchase and, after flying inside, his wife was fine with the aircraft. On November 7, Halladay took his plane out for a flight, but this time, it crashed in shallow waters just off the Gulf of Mexico killing the star player.

Right now, the investigation is ongoing as to what might have caused the crash. Fans and friends are sending condolences via social media to the grieving family. We’ve included some of them here.

A simple ask of the Blue Jays – retire #32, put Roy Halladay's name on the Level of Excellence and put up a statue in his honour outside the Rogers Centre.

WATCH: An emotional @ColeHamels speaks on the death of his former teammate Roy Halladay: https://t.co/7FPA1XM1lj pic.twitter.com/LZEnRkfM6k