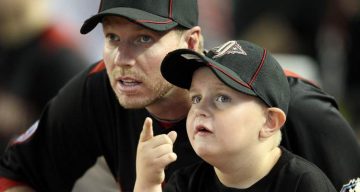 Roy Halladay, one of the greatest pitchers in Toronto Blue Jays history, passed away yesterday in a fatal plane crash. Roy Halladay’s family, former teammates, and scores of fans mourn his death. We’ve got all you need to know about the famous ballplayer and his family, right here.

On November 7, 2017, retired MLB player, Roy Halladay’s plane crashed in the Gulf of Mexico. He is survived by his family, which includes his parents, sisters, wife, and kids. The investigation into his fatal plane crash is pending, but a video has put his wife in the spotlight. Find out about Roy Halladay’s family here.

Born in Denver, Colorado, Halladay grew up loving baseball and sharing his father’s passion for flying. His mother, Linda, was a homemaker while his father, Harry Halladay Jr., was a commercial pilot for a food processing company. He also has two sisters, Merinda and Heather.

His father instilled a love for baseball in him when he was young, and helped him train to be a major league pitcher one day. After initial hiccups at the start of the career, Halladay was able to fulfill his father’s dream and play in the Major Leagues.

Thanks to Harry Halladay, Roy had a lifelong love of flying. After retiring from MLB in 2013, he acquired his pilot’s license and a month ago, purchased his first plane. He often tweeted about his amphibious aircraft and sometimes gave a nod to his father in them.

#2. He Met His Wife When They Were Kids

Roy and Brandy Halladay grew up in the Colorado suburb of Arvada where they went to the same church with their parents. They were childhood friends who lost touch after Brandy (née Gates) moved away.

She loves animals, especially horses after following her mother to her equitation classes. She even planned to save up enough to buy her own horse one day. But because they moved a lot, she couldn’t have a horse of her own.

Years later, when the family moved back to Colorado, she and Roy reconnected. After two years of dating, they tied the knot. Soon after their marriage, Roy gifted her with a horse and helped her get back to horseback riding.

They lived in Florida after their wedding before moving to Toronto when he was signed by the Blue Jays. Since retiring, the family settled in Florida.

Roy and Brandy are parents to two boys, Braden and Ryan, who seem to be following their father’s footsteps to the mound. Ryan has been seen a few times at his father’s games. Halladay turned down executive positions on MLB teams to spend more time with his sons. He coached the U-13 team (which Ryan plays on) and recently led them to a Florida State Championship for the second year in a row!

Braden, who’s now 16, has inherited his father’s athletic genes and is the star pitcher for his high school baseball team. He is active on Instagram and Twitter, and often posts about his games, girlfriend, and friends.

I love the Players & Parents of our Florida Burn! They keep proving why they’re the best team on the field but more important the classiest! pic.twitter.com/4agAeCO4wY

#4. His Wife Pulled Him Out of a Slump

Halladay’s initial career was marred by less-than-impressive stats, which saw him demoted to Class A ball by the Blue Jays until he improved his delivery. He was embarrassed to return home to Colorado and they decided to stay in Florida. When Braden was six months old, Halladay considered quitting baseball and returning to school.

But his depressing thoughts worried Brandy. So, she bought him books to improve his pitching and motivated him to stick to baseball. Her encouragement worked and soon enough, Halladay had a breakout 2002 season.

He signed high-paying contracts with the Blue Jays and Philadelphia Phillies, and has a net worth estimated at $70.0 million. He was one of the few pitchers who won the Cy Young Award and it is expected that he will be inducted into the Baseball Hall of Fame soon.

#5. His Wife Protested against His Flying

The 40-year-old pitcher was the only one excited about his ICON A5, which was purchased a month before his death. In a promotional video made by the aircraft company, that has since been removed from YouTube, Brandy Halladay is seen expressing her hesitance about Roy’s two-passenger aircraft.

“She’s fought me the whole way,” said Roy. “Hard” Brandy emphasized, “I fought hard. I was very against it.” Brandy couldn’t win this argument once Roy took her on a flight. She reluctantly caved in and let him follow his high-flying dreams.

While authorities are looking into Halladay’s fatal plane crash, condolences and prayers for his family pour in from the baseball community.

I literally grew up on a baseball field. pic.twitter.com/wh0zZTQmtJ