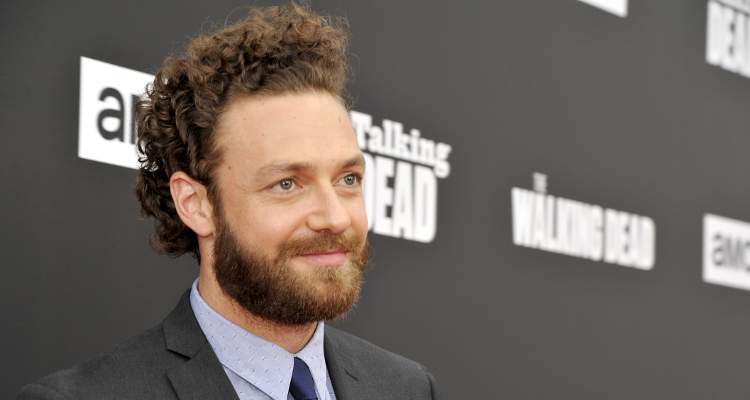 Another favorite is down in The Walking Dead, after last night’s (November 5) episode. As sad as Aaron’s heartbreaking loss was, people want to know more about the actor who plays him. The love he shares with his onscreen boyfriend gives us all relationship goals and many are curious to know; Is Ross Marquand gay in real life? We’ve got the scoop.

The Walking Dead did a number on our hearts after last night’s episode. And we’re only three episodes into the new season! Aaron had to watch his lover, Eric die and reanimate into a walker after a touching scene, and that was the end of the TWD franchise’s beloved gay couple. But fans are more curious to know about the actors who portray them, especially Ross Marquand who plays Aaron. Here’s what you need to know about him in our Ross Marquand wiki.

#1. He Found His Passion Early

The Colorado native made his first foray into acting when he was just nine years old. The opportunity came in the form of a small role in a church pageant. Nevertheless, he knew showbiz was his calling.

His talent got a push when he joined the Boy Scouts of America and imitated celebrities around the campfire. He went on to pursue a Bachelor of Fine Arts degree in theater from the University of Colorado at Boulder. There, he participated in stage productions like To Kill a Mockingbird, The Passion of Dracula, and The Cherry Orchard.

Soon after graduating, he moved to Los Angeles to pursue acting professionally. In no time, his on-screen appearances were catching the eyes of audiences for his remarkable talent.

Before he was fighting zombies on The Walking Dead, Marquand was popular for another AMC show. He portrayed the legendary Oscar-winning actor, Paul Newman on Mad Men. In season 6, the folks at Sterling Cooper Draper Pryce attended an advertising awards dinner, where Marquand as Newman was a keynote speaker.

The 36-year-old has acted in and produced several movies, mostly short films. He’s also an accomplished voice-over artist, having lent his talents to Phineas and Ferb and Conan, as well as the video game, Battlefield Hardline. His versatile talent has earned him a net worth estimated at $1.0 million.

Given the gritty role he plays in TWD, you wouldn’t guess that Marquand has a side career in comedy. During his time as a boy scout, he honed his talent for impersonating celebrities at campfire ceremonies. Now, he’s famous for his spot-on impersonations of celebrities like Harrison Ford, Kevin Spacey, Brad Pitt, Matthew McConaughey, and over 50 others.

Hey folks- here's my #SNL audition reel: http://t.co/ERvCnio8 Much love to @zakforsman & @jamiecobbeditor for their work!

His talent for impersonations led him to star on Pop TV’s, Impress Me. He posts hilarious sketches of his impersonations on his YouTube channel and website. One of his most famous videos has him nailing Frank Underwood in a fusion parody of Game of Thrones and House of Cards.

Now would be a good time to request SNL let this guy host an episode! Who knew he had such hidden comedic talents! Check out the video below and you might agree.

Also Read: Who Is Morales on “The Walking Dead?” What Happened to Him?

When Ross Marquand joined the TWD cast in season 5, there was speculation over which character from the famous comic books created by Robert Kirkman he would play. It created quite a buzz when it was revealed he was one half of the first gay couple of the franchise.

Joining the cast was exciting for Marquand, who’s a big fan of the series. “I’ve been following along and it’s fantastic; and of course it’s sparking a little bit of debate in terms of whether we can trust Aaron, if it’s going to closely mirror the comics or if it’s going to go in a totally different direction,” he said about his debut as Aaron. “It’s wonderful and it’s strange, too, because I’ve been a fan of the show since the beginning. So, to go from mainlining season 4 two weeks before I got cast to actually being on the show is bewildering in the best way.”

It was also nerve-wracking for him to join the show he loved as a fan. But the show’s cast, particularly Andrew Lincoln, made him feel welcomed.

The multi-talented actor also found it tough to keep the news of his casting a secret until he could talk about it publicly. It was hardest for him to keep it from his parents. ”Especially over Christmas when all of my family asked what I’ve been up to. Having such huge news, but not being able to say it was a lesson in discipline and restraint. I’m happy to say that I passed with flying colors.”

Marquand is one of the many actors who strive to keep their privacy. There are no details of a significant other in his life at the moment, and most reports suggest he is single. While Aaron and Eric’s became the “It” couple in this post-apocalyptic universe, Marquand’s portrayal of Aaron had many questioning his sexuality in real life.

Many ask if Marquand is gay and if he’d dated any men outside of TWD. However, he doesn’t share details of his romantic life and he hasn’t been spotted out on a date before. The closest thing he’s had to a romance is an old Instagram post with his “new girlfriend.”

The Walking Dead airs Sunday nights at 9:00 p.m. EST only on AMC.

Hanging out with my new girlfriend…she's hilarious.