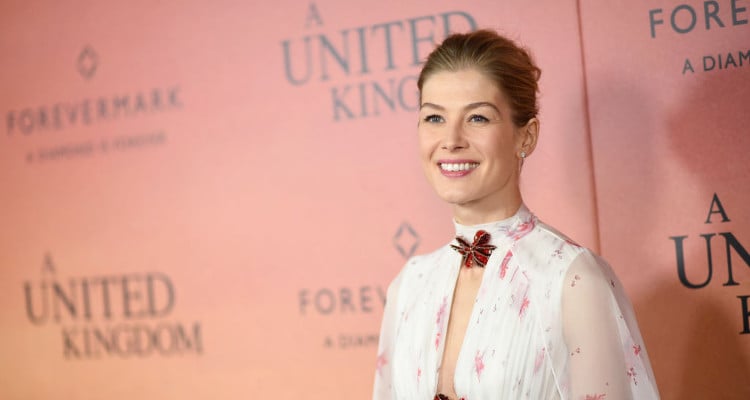 A rose by any name will smell as sweet. Unless the rose is named Rosamund Pike, in which case it would be the world’s most beautiful rose. The actress hits red carpets looking absolutely flawless head to toe —or as Tyra Banks would put it “H2T.”

Rosamund Pike ticks all the boxes when it comes to elegance, fashion, and acting. The actress has three movies —HHhH, High Wire Act and Hostiles— releasing this year, stars in the popular sci-fi series, Thunderbirds Are Go, and hits red carpets like they’re runways in Paris. As much as she evokes an English rose, the most memorable appearance of Pike would be from the 2014 thriller, Gone Girl. It’s difficult to get rid of the blood-covered murderer image in our minds. That’s why we’ve compiled a list of the hottest and most beautiful pics of the Rosamund Pike outside of Gone Girl. But first, here’s a little background on her.

The daughter of opera singers, Rosamund Pike traveled across Europe with her parents to wherever they performed. She appeared in a theater production of Romeo and Juliet where she was noticed by an agent. Surprisingly, stage schools in London turned her down. While at Wadham College, Oxford she took a year off to gain stage experience and graduated with an Upper Second Class degree.

As she gained a presence, she also acted in TV shows. Her breakthrough role came in the James Bond flick, Die Another Day. As a Bond girl, she appeared in Bond Girls are Forever. Her long body of work has won her nominations for an Oscar, BAFTA Awards, a Golden Globe, and more.

She is been in a relationship with Robie Uniacke, a math researcher, and they have two sons together. The couple is recluse and rarely seen in public together. But Pike is a well-known A-list actress and she never fails to look anything less than amazing. Without further ado, here are Rosamund Pike’s hottest pics.

#1. She said it herself, there’s too much beauty in one picture.

Too much Beauty in one picture ??? #Rosamundpike

#2. If you had any doubts of her beauty…

Have a beautiful day ❤#rosamundpike

Promotional pics from Rosamunds new movie "HHhH" /"The Man With The Iron Heart" (2017) ? The movie is about Reinhard Heydrich, former leader of the SS during the time of the Nazis and Rosamund plays his wife, Lina Heydrich. I'm super excited to see this movie, because I'm a huge history lover and the german history, as cruel (?!) as it was, is very interesting. I love movies like that and when you're favourite actress is in it….. It can't get any better ? I bet Rosamund portrays Lina at her best, she's an actress who can play ANY role with brilliance. Can't wait to see this wonderful woman on the cinema screen again ? #Rosamundpike #linaheydrich #reinhardheydrich #HHhH #jasonclarke #miawasikowska #jackoconnell #jackreynor #themanwiththeironheart #cedricjimenez #himmlershirnheisstheydrich

#4. The many faces of Rosamund (and they’re all gorgeous).

#7. Is Anna Wintour missing her sunglasses?

#8. This one will haunt us until the end of days.

#9. Who wouldn’t want to be interviewed by her?!

Day 28: Favourite female co-star ✨ So much love for the Bennet sisters ❤ Their screen chemistry is just too beautiful ? I love Pride and Prejudice ? #janeausten #keiraknightley #prideandprejudice #elizabethbennet #janebennet #Rosamundpike

#12. What’s the secret to her svelte figure?

Day 17: Favorite photoshoot picture ✨ Another day, where I had no idea which picture I want to take. Rosamund has done so many beautiful photoshoots, so it's impossible to choose my favourite. I chose this shot because she's just flawless on this picture ✨ Love her to the ? and ? #Rosamundpike #30daysidolchallenge #30daysofRosamund #vogueuk

WHO wore it better? ? NICOLE or ROSAMUND? Comment below ⬇ #nicolekidman #rosamundpike ? It's so hard to decide, it looks gorgeous on both of them ? Please consider that Rosa's picture is from a photoshoot and Nicole's from the Emmy awards. ?