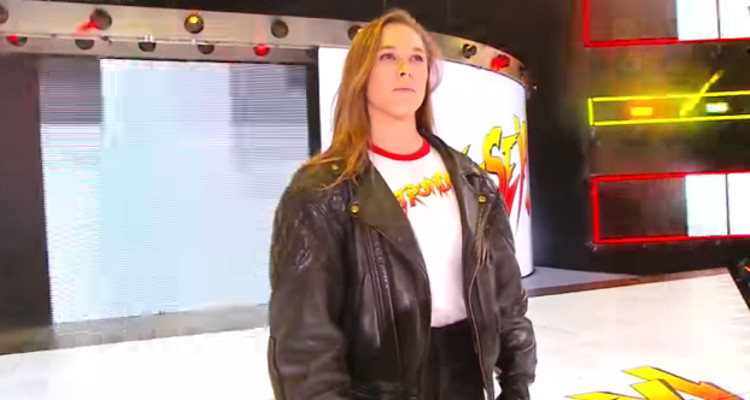 UFC star Ronda Rousey is WWE’s newest signing! Fans were surprised to see Rousey as she appeared on stage after the first-ever women’s Royal Rumble. She went on to step into the ring and point at the WrestleMania sign. Many fans also noticed Rousey’s jacket, which apparently belonged to WWF legend Roddy “Rowdy” Piper. Is Ronda Rousey related to Roddy Piper? Keep reading to find out!

Ronda Rousey is all set to take on the best in the world of women’s wrestling after signing with WWE. Social media was buzzing with the news of the surprise announcement that came on Sunday!

It’s a dream come true for Rousey, who is a big fan of the late wrestler and actor, “Rowdy” Roddy Piper.

Rousey paid a moving tribute to Piper when he passed away in 2015. We’ve got everything you need to know about Ronda Rousey’s connection to Roddy Piper right here!

Who Is Ronda Rousey?

After her appearance at the Royal Rumble on Sunday night, everyone wants to know more about Ronda Rousey. Here’s a short introduction:

The #RoyalRumble got #Rowdy! @rondarousey made her presence in Philadelphia! #WWE @wwenetwork

Ronda Rousey first burst onto the scene as a bronze medal winner in judo at the 2008 Olympics. She then went on to join MMA, and as an amateur, won her fights in just minutes!

She went on to become a professional MMA fighter and soon became the UFC women’s Bantamweight Champion. She gained celebrity status and appeared on talk shows, magazine covers, TV shows, and movies.

Had a blast with @teamcoco the other day thank you for having me back! And big thank you to the pit crew who helped me look presentable fresh off a red-eye Jumpsuit: @tahariasl @pistolandstamen Choker: @nissajewelry Heels: @fendi Styling: @alejandroperazastyle Hair: @peterbutlerhair Makeup: @mariko_hirano

Rousey’s final match as a UFC fighter was in 2016, and she stepped away from the sport.

She shared that professional wrestling is something she wanted to do for a long time, saying, “It’s funny  —it’s kind of like acting, in that it was something I always wanted to do but I never thought was in the cards for me. And now that I realize I really do have this opportunity, I feel like my 6-year-old self would totally kick my ass if I didn’t take it.”

What’s the Relationship between Ronda Rousey and Roddy Piper?

Ronda Rousey is a big fan of the late “Rowdy” Roddy Piper, and they also shared the same trainer.

My road to #wrestlemania begins now

Rousey asked Piper’s permission to use his nickname in her career. Fans may also remember Ronda Rousey’s Roddy Piper tribute after his death in 2015.

After her win over Bethe Correia in August 2015, Rousey said, “We lost a really close friend, ‘Rowdy’ Roddy Piper, who gave me permission to use his name as a fighter. I hope he and my dad had a good time watching this today.”

On Sunday night, she was wearing Roddy Piper’s jacket, which his son reportedly gave her just before the show. She was also wearing a t-shirt with her name scrawled in Piper’s trademark signature.

The jacket Ronda Rousey is wearing at the @WWE Royal Rumble was Rowdy Roddy Piper's jacket. His son gave it to her beforehand.

The New “Rowdy” Is Here!

Ronda Rousey is not the first athlete to cross over into WWE. Mike Tyson, Shaq O’Neal, and Lawrence Taylor are some of the stars who have stepped into the WWE ring.

Channeling her inner “Rowdy,” Ronda Rousey’s Royal Rumble appearance last night was a huge surprise not only for fans, but also Steph McMahon who was left “speechless.”

As her name appeared on the big screen, Joan Jett’s “Bad Reputation” filled the arena as some fans cheered and welcomed Rousey. She proceeded to the ring where the newly-crowned Royal Rumble champion Asuka, and women’s wrestling champions, Alexa Bliss and Charlotte Flair looked shocked.

After rumors were swirling, it is finally official: Ronda Rousey joined WWE!

What a night it was for wrestling fans!