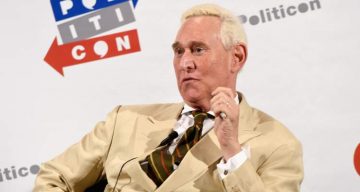 There’s no such thing as negative publicity, and Roger Stone thrives on that. But enough about him. The political operative gets all the attention in the media circles for his controversy-courting ways, but what about Mrs. Roger Stone? Nydia Bertran Stone was a tabloid fixture with her husband at one point in time, but where is she now? We’ve got the details in our Nydia Bertran wiki.

She Has a Cuban Heritage

Roger Stone has always been a regular feature in the media, including for the lavish lifestyle and parties he threw with his first wife, Ann Stone. After his divorce from Ann in the ’90s, he met Nydia Bertran during one of Ronald Reagan’s presidential campaigns.

The Cuban-American woman’s father was reportedly a diplomat in Cuba. He served as a military attaché in the U.S. before the Batista regime was overthrown by Fidel Castro.

She was working as a photographer when she met Roger Stone. With Nydia’s family having ties in South Florida, the couple reportedly spent a lot of time in Miami.

Where there’s Roger Stone, there’s controversy, and Nydia is no stranger to it. For a long time, Roger Stone and his wives, both current and former, have been famous for their political influence, as well as their stylish public personas throughout the ‘80s and ‘90s.

He was consulting on Bob Dole’s 1996 presidential campaign when reports broke out that Stone was running a group-sex ring! According to the allegations, Stone ran personal ads in a magazine, Local Swing Fever, and on a website.

The ads, which featured photographs of the Stones, gave specific preferences, like athletes and military men, and discouraged overweight candidates.

Stone denied the allegations and further investigation revealed that it was the work of a disgruntled ex-employee. Nevertheless, it ended with Stone resigning from Dole’s campaign.

However, in a 2008 interview, Stone said the ads were authentic. “When that whole thing hit the fan in 1996, the reason I gave a blanket denial was that my grandparents were still alive,” he said. “I’m not guilty of hypocrisy. I’m a libertarian and a libertine.”

She Stands Up for Her Husband

Back in October 2017, Roger Stone’s Twitter account was suspended when he took his own brand of freedom of speech to the digital level. Stone went after a number of CNN personalities on Twitter after the network’s reportage on Robert Mueller’s Russian investigation.

Twitter has banned my husband- why don't they ban the TWITTER BULLIES who threaten to kill our family and even our dogs ? #doublestandard

Before her husband was banned from Twitter, Nydia herself was active on the social media platform. When his account was suspended, she tweeted, “Twitter has banned my husband- why don’t they ban the TWITTER BULLIES who threaten to kill our family and even our dogs ? [sic] #doublestandard”.

She last tweeted in November where she likened her husband’s tweets to the “Shining truth.” Nydia has apparently stepped away from Twitter and hasn’t posted pictures of her husband since.