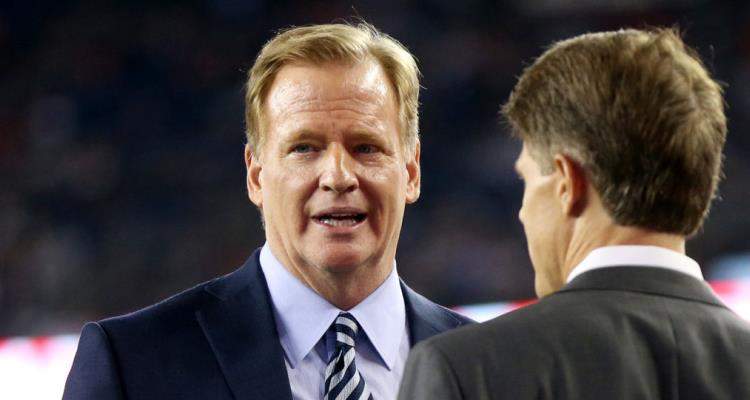 NFL Commissioner Roger Goodellsigned signed a five-year contract worth up to $200.0 million, reports say. The NFL confirmed the deal Wednesday afternoon. The multi-million dollar contract comes after he was in the hot seat over falling TV ratings, player protests, and a public feud with Dallas Cowboys owner, Jerry Jones. But the deal is set to make Goodell a very wealthy man.

Roger Goodell is raking in the moolah as the NFL Commissioner! Goodell’s new five-year deal is an extension of his current contract, which is based on the fact that he met the league’s financial targets.

With the new deal, Goodell is all set to take home a cool $40.0 million per year. Now that’s some serious money!

Keep reading to know more about the commissioner’s role in the NFL, as well as Roger Goodell’s net worth in 2017.

Breaking: Roger Goodell has signed a contract extension to remain the commissioner of the NFL. (First reported by @ProFootballTalk and confirmed by ESPN) pic.twitter.com/RlXdQBuFzv

Born on February 19, 1959, in Jamestown, New York, Goodell comes from a political family. His father, Charles Ellsworth Goodell, was a United States Senator from New York.

Roger Goodell was a star athlete in high school, but injuries disallowed him from pursuing sports at college. He graduated with a degree in Economics from Washington & Jefferson College in Washington Pennsylvania.

Goodell started as an intern in the NFL in 1982, and slowly climbed the league’s business ladder. He was the assistant to the president of the American Football Conference in 1987 and took on some business and football operation roles.

In December 2001, Goodell went on to become the NFL’s Chief Operating Officer. He handled various significant responsibilities, including marketing strategies and development of football stadiums.

When former commissioner Paul Tagliabue retired, Goodell was voted in as the Commissioner by a majority of NFL team owners. Goodell officially assumed the title of NFL Commissioner on September 1, 2006.

So, what does Roger Goodell do as the NFL’s Commissioner? And, what role does a commissioner play in the football league?

Roger Goodell believes that his role is to protect the league’s integrity and make the game safer for players. He announced personal conduct policies for players accused of misdemeanors like drunk driving, consuming banned substances, and domestic violence. And, Goodall’s policies also extended to conduct on the field with some players fined for not playing within the rules. However, the way he handled many of these cases was met with disapproval.

Goodell also worked at getting a $765.0 million settlement for former NFL players who had suffered head injuries. The agreement led to the creation of a compensation fund, which players could use to their treat head injuries.

The Commissioner had also been criticized for his actions surrounding the suspension of NFL star quarterback, Tom Brady in 2015. Goodell was accused of wielding his power “unfairly and arbitrarily.”

Goodell said about the controversy, “We think it’s important that the commissioner protect the integrity of the game, that you can’t entrust that to someone who has no understanding of our business, and the appellate court yesterday reaffirmed that. So, we think this is an important element of our success. We obviously have changed our discipline process through the years, and we will continue to do that if we think it’s in the best interests of the NFL.”

How Much Does Roger Goodell Make?

Criticism or not, Goodell is earning millions in his role as the NFL Commissioner. And, football fans will be shocked to know how much he makes.

Roger Goodell’s salary was reportedly around $30.0 million per year before the new contract was signed. And now, that figure has gone up to $40.0 million including incentives received on meeting financial targets.

But even without bonuses, Goodell is guaranteed to take home an annual base salary of $4.0 million, reports say. Holding the job as the most powerful man in the NFL has never been so lucrative!

According to sources, Goodell had signed for about $49.5 million as annual salary, lifetime health insurance for his family, and the use of a private jet for the rest of his life before the new deal was finalized.

Goodell has also invested a lot of money in real estate. Roger Goodell’s house in Scarborough, Maine, may have been a target of many practical jokes after the Tom Brady episode, but the mansion is reportedly worth $6.5 million.

According to sources, Roger Goodell’s signed is currently estimated at around $75.0 million. The new contract will considerably add to Goodell’s wealth.

A Look at the New Contract

The announcement of Roger Goodell’s contract extension came as a memo to NFL team owners yesterday.

Roger Goodell is getting PAID. ? pic.twitter.com/btAMSv9kK2

The signed read, “In recent days, we have spoken with each of you individually regarding the status of the negotiations to extend Commissioner Goodell’s employment contract. In the course of those discussions, we have reviewed with you the details of the contract extension. Our Committee unanimously supports the contract and believes that it is fully consistent with “market” compensation and the financial and other parameters outlined to the owners at our May 2017 meeting, as well as in the best interests of ownership.”

“We also have expressed in those conversations our strong and unanimous belief that we should proceed to sign the agreement now, consistent with the unanimous May resolution and to avoid further controversy surrounding this issue. We are pleased to report that there is a nearly unanimous consensus among the ownership in favor of signing the contract extension now.”

Goodell’s previous contract was ending in 2019, and the extension will keep him as the NFL Commissioner until 2024. And despite the controversies surrounding him, team owners see Goodell as the best man for the job in a business that brings in $14.0 billion every year.