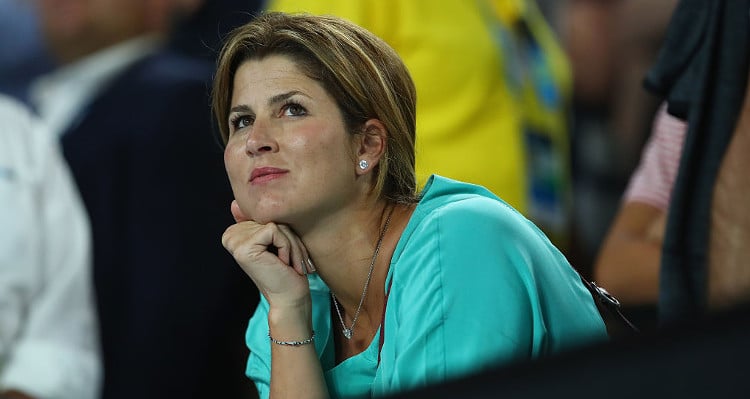 Mirka Federer’s undying support and love for her husband, Roger Federer, are what all relationships should be about. His wife has been the backbone to his tennis career for a very long time. Here is everything you need to know about Roger Federer’s wife, Mirka Federer.

Roger Federer and wife give us all serious couple goals. Mirka is always spotted cheering for her husband and supporting him during his matches. But how much do we know about Roger Federer’s wife? We have everything you need to know about Mirka Federer including her age, Instagram, and pics.

"I'm just happy she is my wife and first supporter. She tells me the truth, always." – Roger. ❤️☺️ (Via: tagesanzeiger twitter) #mirkafederer#federer#rf#rogerfederer#cute#love#woman#wife#beautiful

Miroslava “Mirka” Vavrincová was born on April 1, 1978, in Bojnice, Slovakia. At the age of two, she emigrated to Switzerland with her family. In 1987, she went with her father to a tournament at Filderstadt in Germany. There, she met Martina Navratilova, who kind of convinced Mirka to try playing tennis after telling Mirka she should try playing tennis. Martina even sent her a racket and even organized her first tennis lessons.

She is my favorite former tennis player ✨? Thanks @mirkafedererfan #mirkafederer#federer#rogerfederer#rf#tennis#sport#cute#love#beautiful#woman

Before she retired from tennis, Mirka was ranked in the mid-80s. In 2001, she reached the third round of the U.S. Open, making it her best Grand Slam performance. After suffering a persistent foot injury, Mirka Federer retired from the sport, and took on the role of her husband’s public relations manager. She often travels with him for his matches —unless their kids keep her busy.

The couple met during the 2000 Sydney Olympics where each represented their respective countries in tennis. Roger Federer once stated that he stayed away from dating tennis players. However, once he began dating Mirka, Roger realized how his relationship with a tennis player could actually help him grow both in his personal as well as professional life. During an interview, Roger said, “But in my situation, I think it really does help, because she knows in some ways what it takes, and she did it on a level that was still very good but not at my level.” The couple got married in 2009 and are still going strong.

Paul Annacone, one of Roger’s coaches, said about Mirka, “She still plays a huge role and has great input and impact. She understands the big picture extremely well and does a great job in terms of letting us work but also shares invaluable information. This is a tricky balance. She’s been there since day one, so she knows very well what it takes and how to get there.”

Roger and Mirka Federer got married on April 11, 2009, at Wenkenhof Villa in Riehen. The wedding was a small affair surrounded by only close friends and family. In July 2009, Milka and Roger welcomed twin girls, Myla Rose and Charlene Riva. In 2014, the couple welcomed their second set of twins, this time two boys named Leo and Lennart.

Though they have young children at home, Mirka Federer makes sure to attend as many of her husband’s tennis tournaments and matches as possible. Quite often, their children can be spotted cheering for their father in the stands. They are a sweet family of six! Roger Federer appreciates his wife and what she does, saying, “I know how fortunate I am … And maybe that’s one of the reasons that makes me very happy when I’m playing and makes me very motivated, because I know this is not a normal situation I’m in, being able to play with a healthy, happy family next to me, because the easiest thing would be to say, ‘Let’s just stay home and take care of the kids.’”