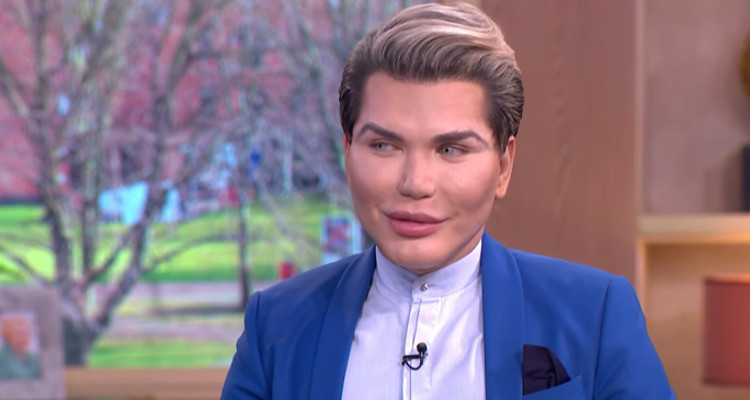 Rodrigo Alves, aka the “Human Ken Doll,” is in some serious trouble. Alves’ nose could “die” and “fall off” if he continues to have work done. Though he was shocked when the news was revealed to him on Botched, Alves was still seen partying in Las Vegas over the weekend. Find out what Alves looked like before his surgeries, and learn all you need to know about the “Human Ken Doll” in our Rodrigo Alves Wiki.

Rodrigo Alves is known as the “Human Ken Doll” and has gained a lot of popularity in the eyes of the media, thanks to his extensive number of plastic surgeries. Alves is a Brazilian born, British TV personality, with a face you can’t forget. He was born in Sao Paulo, Brazil, and Alves’ age is 33. The plastic surgery addict has had work done since 2004, and shows no signs of slowing down. He was recently warned about his addiction to plastic surgery, and was told that having extra work done before the rest has healed can result in his nose falling off.

Once an average looking man from Brazil, Alves’ job is a transatlantic flight attendant, and he has a dream that nobody can stop him from achieving. Alves has a European background. His family immigrated to Brazil in the ’40s to start a farming business, which eventually developed into supermarkets and other grocery centers. He first had plastic surgery when he was 20 years old, after being bullied because of his appearance throughout his life. He went through a rough patch due to a hormonal imbalance, making him grow breasts and preventing him from bulking up. Doctors advised that the only way he could become more muscular was through surgery. He has since spent a fortune to create his new body, and doesn’t regret it at all.

An air steward who has undergone 42 operations to look like 'Barbie's Ken' is being treated for a potentially life-threatening condition after his body rejected his new nose. Rodrigo Alves, who has spent £305,000 on plastic surgery, is in hospital with necrosis – where the flesh begins to die – after undergoing a nose reconstruction. After the operation, a hole began to appear in his nose and his new septum appeared to come loose. Slowly, the hole grew and he began having trouble breathing and so was sent to hospital in Malaga, Spain, where he is now receiving antibiotics through an IV drip every eight hours. Doctors say the infection may eat through his nose into his face – which could become gangrenous – and so it may have to be removed. The 32-year-old, who is originally from Sao Paulo, Brazil, but now lives in London, is desperate to fly back to the UK to receive treatment. (Daily Mail) #humanken #humandoll #rodrigoalves #plasticsurgery #beforeandafter #nosejob #rhinoplasty

The number of Rodrigo Alves’ plastic surgeries are now in the double digits! He has gone under the knife 51 times and is not likely to stop. He also holds a Guinness world record for the “Most Cosmetic Procedures.” Alves has had multiple surgeries all over his body to ultimately look a doll, including a butt lift, several rhinoplasties, an eye augmentation procedure, and a smile corrector. He also had abs surgically implanted and is happy with the way he looks. So far, Alves has spent around $465,000 for his surgeries, only to find a huge problem with his new nose. He was rushed to the hospital in April 2016, when he found a hole in his enhanced nose, which was a result of his body rejecting the synthetic cartilage. Since having more work done three months ago, it seems as though Alves is facing further complications with his nose, which he was told could “fall off” if he has more surgery before it heals.

Rodrigo Alves’ extensive surgeries have earned him the nickname the “Human Ken Doll.” Unfortunately, he is warned by Dr. Paul Nassif on a preview of E!'s "Botched," that there is a possibility that his nose "will turn black, and then die, and fall off" if he risks another procedure. • • • Nassif said that it was “one of the worst results and complications” he had seen in his entire career. Alves is using his platform to warn others of the potential dangers of plastic surgery. • • • To see the preview for this new episode, visit the #linkinbio • • • #plasticsurgery #botched #humankendoll #kendoll #rhinoplasty #rodrigoalves #tv #botchedplasticsurgery #berare #onrare

Botched, which aires on E!, follows people who have had bad plastic surgery operations, and the doctors who aim to repair those “botched” procedures. Rodrigo Alves appeared on Botched, and the most recent episode revealed a terrifying side to cosmetic surgeries. Dr. Paul Nassif warned Alves that his nose could “turn black and then die” if the “Human Ken Doll” doesn’t allow time for his previous surgeries to heal. This terrible news almost brought Alves to tears when he found out that his nostrils were not only too small to breathe, but were also infected. Dr. Nassif was shocked to hear that Alves had three reconstructions done on his nose in just one year, considering that it could take up to two years for the nose to heal after one surgery. He noted that the tissues were severely damaged and “the skin’s no good.”

Alves  discussed his transformation with E!, saying that he decided to get plastic surgery once he came to England. When he saw how the people around him looked, he wanted to change his appearance. Alves then had his first surgery, a nose job. (Surprise, surprise!) With the recently discovered complications, we only can wait and see how he decides to proceed.

Where’s the Money Coming From?

Alves can afford to pay for the surgeries himself, thanks to his modeling gigs and TV appearances. He has appeared on TV shows in England as well as the U.S., he’s been photographed for GQ and Vogue, and he has his own reality show. Though Rodrigo Alves’ net worth hasn’t yet been calculated, it’s clear that he’s got a fair bit of change. He spent over $400,000 to look the way he does now, and is usually seen wearing designer clothes, traveling to exotic places, and most recently, partying in Las Vegas (things seem to be looking good for him).

Well, wherever he’s getting the money from, there better be more of it somewhere because if he really wants to look “young forever,” he’ll have a lot more to pay!