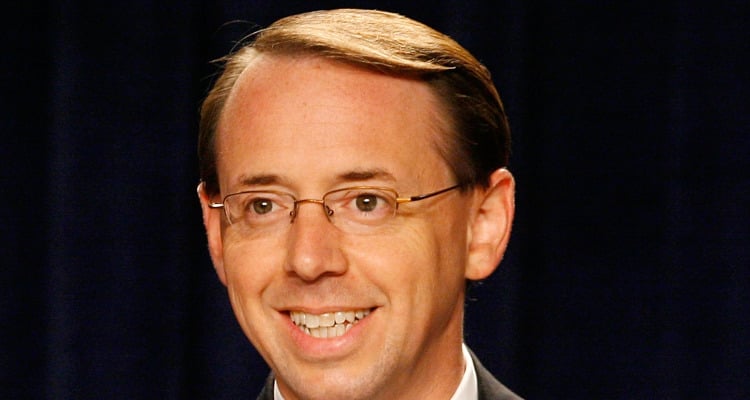 Since it was announced late Tuesday that FBI Director James Comey was fired, people have been wondering about the man behind the termination. Who is Rod Rosenstein? Here is what you need to know from Rod Rosenstein’s wiki.

Former FBI Director James Comey was fired from his position yesterday (May 9) by President Donald Trump. The man responsible for this, is Deputy Attorney General Rod Rosenstein.

Rosenstein wrote a letter to President Trump suggesting that Comey be removed from the FBI. In it, he detailed his reasons why, and also cited the investigation into Hillary Clinton’s email server as one of them. “It is not the function of the Director to make such an announcement, at most, the Director should have said the FBI had completed its investigation and presented its findings to federal prosecutors,” his letter read. Who is Rod Rosenstein? We will tell you about his net worth, age, and Rod Rosenstein’s family, right here.

Rosenstein’s wife, Lisa Barsoomian is an American-Armenian lawyer at the National Institutes of Health. The couple has two daughters: Julie, who is 17, and Allison, who is 15.

A few years after graduating from Harvard Law, Deputy Attorney General Philip Heymann chose Rosenstein to serve as counsel in the Clinton administration. About his decision, Heymann said, “I would have trusted him with anything, if there was a case where I was worried there was a perception we were being unfair, I would trust him to do the right thing and to do the job.”

He was Appointed as the U.S. Attorney for Maryland

Rod Rosenstein also worked in the U.S. Justice Department as Principal Deputy Assistant Attorney General in the Tax department. In 2005, President George W. Bush nominated Rosenstein as the U.S. Attorney for the United States District Court for the District of Maryland, a position he maintained during the Obama administration.