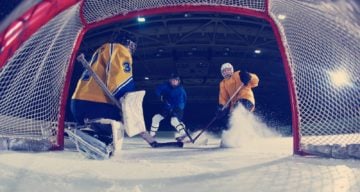 The Vegas Golden Knights are a man short this NHL season after Robin Lehner has to opt out while he undergoes and recovers from hip surgery. He will probably be spending this downtime with his family. Robin Lehner’s wife, Donya Lehner, was talked about on social media some years ago when the goaltender had contentiously vocalized his support for Donald Trump in 2016. However, the NHL pro didn’t support the former president’s immigration stand in the case of people like his wife. Donya Lehner’s ethnicity has intrigued NHL followers since then. So, we reveal more about Robin Lehner’s wife, Donya Lehner, and her background right here.

Donya Lehner (nee Naini) was born on September 6, 1991. She hails from Gothenburg, Sweden, but also has Iranian ancestry.

Her mother, Fereshte Naini, is originally from Tehran, Iran. She is currently living in Gothenburg. They have family in Tehran, and Blatt often visits them.

Donya has at least one sister who remains unidentified. Her sister is said to be studying in the U.S.

Robin Lehner is a native of Gothenburg. He played in the Swedish hockey league and was selected in the 2009 NHL Entry draft before he began his pro ice hockey career in 2010. His wife has been a constant support in his career, but they don’t reveal details of their relationship.

Recently, the goalie has taken to addressing Donya as his wife. However, there are no reports of a wedding, and they haven’t celebrated an anniversary in public.