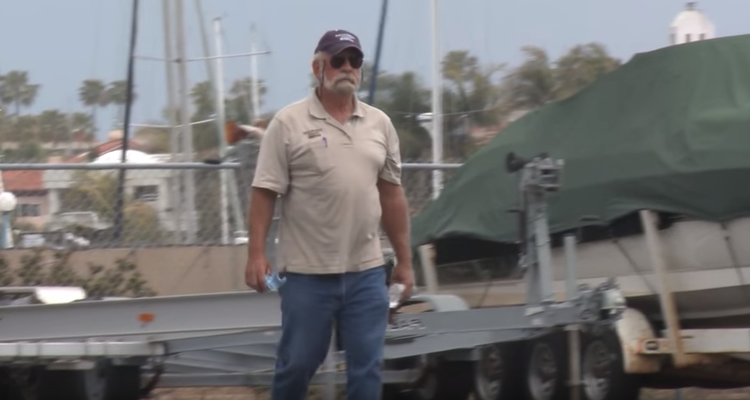 Is Robert Rackstraw D.B. Cooper? That’s what people are wondering, after reading the latest Robert Rackstraw-Fox News story. The case was closed in July 2016, but there was potential physical evidence conducted in a search and now there are even more questions concerning the cold case. To learn more about the man who could potentially be D.B. Cooper, here’s a look at our Robert Rackstraw wiki.

While many are too young to remember this hijacking, it’s as clear as day to those who had heard of the event at the time. On November 24, 1971, a man who called himself “Dan Cooper” hijacked a Northwest Orient Boeing 727 and ransomed the passengers for $200,000.

The commercial flight was headed to Seattle (he boarded a commercial flight in Portland) and in a calm manner, he told the stewardess that his briefcase was filled with dynamite. After the demands were made, the plane landed and he received the money.

Then D.B. Cooper ordered the pilot to fly him to Mexico and near the Washington-Oregon border, he jumped out of the plane wearing a business suit and parachute! The identity of the “skyjacker” was never proven, but the case has been unsolved for 45 years.

Despite his escape, an 8-year-old boy found $5,800 of the ransom on the edge of the Columbia River, nine years later.

Who is Robert Rackstraw?

In 1978, the FBI’s findings pointed to Robert W. Rackstraw, a Southern California resident. Robert Rackstraw’s age is 73 and he’s a former Vietnam vet who served in the U.S. Army as a helicopter pilot.

He also had extensive training as a paratrooper. The investigation team also believed that Rackstraw was one of the “most valued” pilots during his time in Vietnam. According to Mercury News, Rackstraw was raised in a “very poor family” that lived in a two-bedroom house near a creek in Scott Valley, in the ’60s.

He was forced to resign from the army after he falsified college records (he was reportedly a high school drop out), along with “lying” about his medals and rank. Around the time of the hijacking, Rackstraw was missing from his ex-wife and children in Stockton.

He currently resides in San Diego with a 45-foot yacht and even though he has a criminal past—writing bad checks, and was arrested and later acquitted for the death of his stepfather— he was never charged for the hijacking. Even despite the Robert Rackstraw pics that were sketched, the flight attendant said it wasn’t him.

He Denied Being D.B. Cooper

Despite reports of him “casually admitting to being D.B. Cooper,” concrete evidence was never found to support the claim. But when officially questioned, Rackstraw said he wasn’t the infamous hijacker the authorities were looking for, which was also supported by his lawyer.

When a video of a reporter trying to get answers from Rackstraw was studied by a former special agent, the agent believed 100% that Rackstraw was indeed D.B. Cooper, but again, it has yet to be proven.

“It’s a lot of [expletive],” Rackstraw told People, when they contacted him about the accusations. “And they know it is. It’s easy to manipulate audio and photos and stuff like that. And I know they also paid a lot of people off, $40,000 to $50,000, to get them to say what they wanted them to.”

While very few may believe Rackstraw’s story, someone who was once close to him doesn’t.

“I think there’s a good likelihood it’s him,” Rackstraw’s second wife, Linda McGarity, 68, told People. “I believe it because of all the evidence and all the little things that I can look at from way back that just make me just go, ‘Oh yeah.’ All the pieces just sort of come together.”

Is There New Evidence?

After July 2016’s two-part History Channel special, D.B. Cooper: Case Closed? it was made clear that, despite the investigation team’s best efforts, the cold case will stay that way.

Recently, TV and film executive Thomas Colbert, along with his wife and partner Dawna, uncovered a “decades-old parachuted strap” believed to be linked to the Boeing 727 hijacking. Colbert didn’t reveal full details on where the strap was found and the FBI haven’t commented, though Rackstraw has already been eliminated as a suspect.