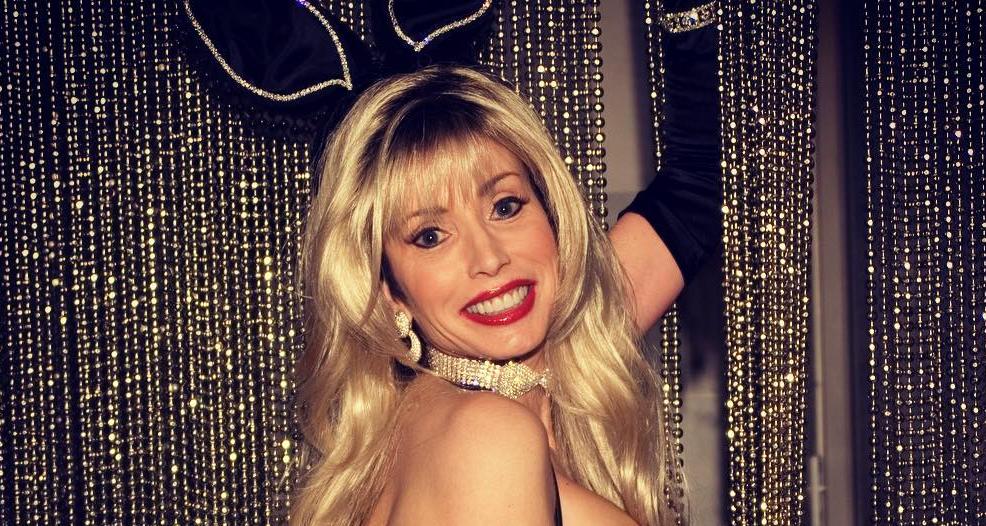 Robbin Young is a former Playboy model who had a stint as a Bond Girl. But she’s making headlines now for admitting she sexted the Russian spies behind Guccifer 2.0, the hackers indicted by the U.S. government for their alleged involvement in the 2016 elections.

The whole Russian investigation took an interesting twist when former Playboy model and one-time Bond Girl, Robbin Young confessed to a steamy online affair with a Twitter user by the name of Guccifer 2.0. The 63-year-old is at the heart of this new revelation for having had a raunchy online exchange with at least a dozen Russian hackers behind Guccifer 2.0, who allegedly meddled in the 2016 U.S. elections.

We’ve got facts on Robbin Young’s exchange with Guccifer 2.0.

The U.S. government indicted 12 Russian spies who allegedly ran the Twitter account, Guccifer 2.0. The Twitter account is believed to be responsible for the DNC hacking and leaking stolen documents to influence the 2016 presidential race.

The news about Guccifer 2.0 shocked Robbin Young, who later came forward with shocking claims. She alleged she was “catfished” into an online affair with Guccifer 2.0.

“I thought he was one Romanian man and I fell in love with him – now to be told it could have been 12 Russian spies running that account – I’m shocked,” said Young.

Young even shared screen-grabs of her Twitter DMs exchange with Guccifer 2.0 on her Twitter account. Their exchange also includes racy pictures and photographs, but Young said they even spoke about politics and serious topics like Seth Rich’s murder.

Their communication was cut off when Guccifer 2.0 stopped sending her messages in August 2016. The FBI questioned Young in September 2017. However, she still believes it was a Romanian man she was communicating with.

Young said in a recent tweet that a cybersecurity firm authenticated the texts and the FBI has seen them too. She affirms she’s a patriotic American and is also willing to testify under oath. 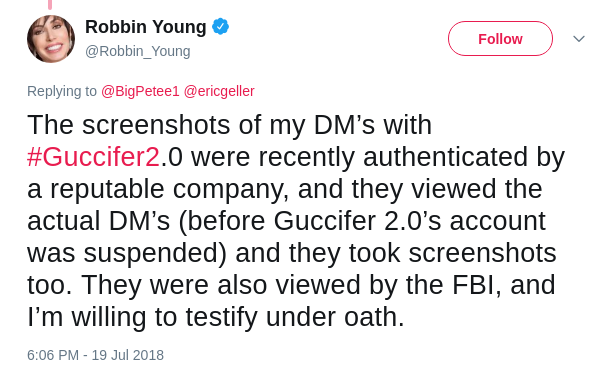 She Has Been Diagnosed with Cancer

Robbin Young is dealing with health concerns on the personal front during the whole Russian spy scandal. She has been very candid about her recent doctor’s visit with her Twitter followers.

According to her recent test results, Young has gastritis from anti-inflammatory medication. The thyroid biopsy came negative for cancer, but she has been diagnosed with Hashimoto’s disease.

After consulting with three dermatologists, Young has been diagnosed with skin cancer on her face. She has a biopsy scheduled in August to know more about her condition. 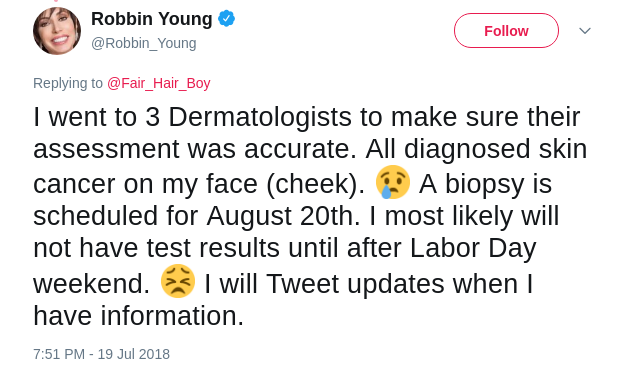 A deeply religious person, Young became an ordained minister on May 20, 2018. But she has had her fair share of critics for her topless past as a Playboy model.

Young has appeared in six U.S. and 12 international Playboy magazines. She entered Playboy’s “Search for a James Bond Girl” contest. She won a part in the iconic film, For Your Eyes Only, starring Roger Moore, where she played a girl in the flower shop.

She is a SAG-AFTRA TV and film actress and has had roles in The Girls Next Door, The Fall Guy, and Thieves and Robbers. But she hasn’t had any acting gigs since 2007.

Young is not shy of her Playmate career and uses the hashtag “#NudeChristian” to describe herself. The hashtag is also the title of her autobiography.

Young lost money in 2007 when her financial adviser mismanaged her wealth. Unable to recover from the losses, she declared bankruptcy in 2017. She says she could withstand all the troubles of the past decade because of her faith.

She Was Engaged to the Lakers Owner

Young is from Fort Lauderdale, Florida, but she lived in Los Angeles for three years. While in L.A., she said she dated numerous celebrities and was briefly engaged to the late Jerry Buss, who was the former owner of the L.A. Lakers. He was known to be a ladies’ man and had a string of younger girlfriends. 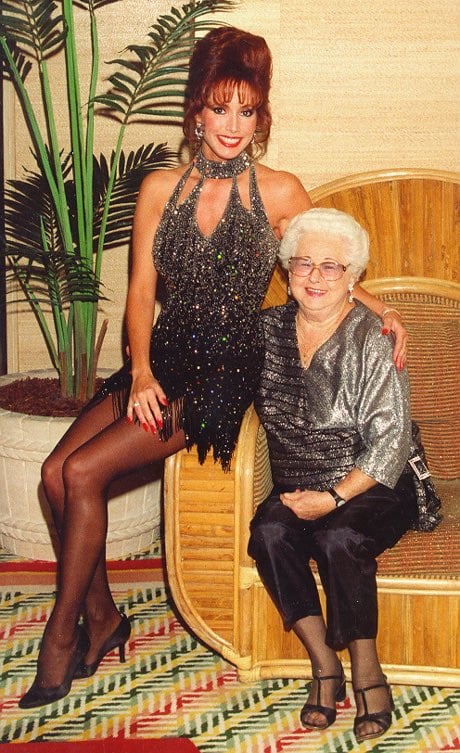 Robbin Young Tweeted a Photo With Her Mother (Photo: Twitter/Robbin_Young)

She moved back to her hometown where she met and married “a wonderful man.” They owned and operated ski resorts in Jackson Hole, Wyoming, making her a millionaire.

Young received $5.0 million from her divorce. She had fired her attorney knowing he would profit the most out of the divorce and asked her ex-husband for enough money so that she never had to work for the rest of her life.

“I was tired from five years of work, without a day off, and I wanted to retire. He was amazed by my lack of greed, and I walked away with over 5 million dollars. Sadly, we never had children. It would have been wonderful to have more than money, when remembering our years together as a loving couple,” Young wrote in her bio.

She moved to Las Vegas where she was engaged to a casino owner. Her relationship was going great until she realized he was dating multiple women at the same time.

Young then settled in Vegas, shacking up in a large house in a gated community and drove a Ferrari. She got involved in philanthropy and traveled.

Robbin Young decided to jump back in the dating pool through online dating. And now, we know how that turned out.