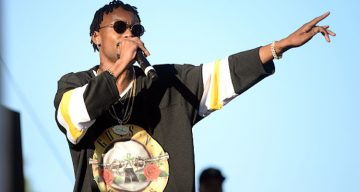 Who is Rob Stone? Unless you’re a hip hop or trap music fan, you may not have heard of the California rapper. During XXXTentacion’s tour, the Florida rapper was attacked and now all his fans are wondering if Rob Stone is responsible. If you want to know more, then you’ll want to look at our Rob Stone wiki.

Who is Rob Stone?

Rob Stone was born Jaylen Robinson on January 25, 1995 in San Diego, California. The 22-year-old rapper is known for his hit single “Chill Bill” and his part in the Rob Stone-XXXTentacion beef. Rob Stone’s net worth is unknown, but it’s estimated at $200,000.

If you’re a Rob Stone fan, then you already know about the young rapper’s Instagram account. He has 141K followers and over 500 posts, usually with him on stage or on the music scene. One thing you may not find is Rob Stone’s girlfriend —if he even has one at the moment. But we’re sure his loyal followers have done their fair share of digging. Given the incident earlier on Wednesday, the rapper has received more than a few death threats and criticisms from his rival’s fans from all over.

On Wednesday, while on his Revenge tour, XXXTentacion was punched on stage in the middle of his set! The video has gone viral and everyone rushed on stage after the Florida rapper was knocked out cold at his own event! According to reports, the attacker was stabbed and now everyone is wondering if Rob Stone was stabbed, as well. The crowd was chanting “f**k Rob Stone” after the attack occurred and rumors have been circulating ever since. Rob Stone’s beef with XXXTentacion is no secret and in the past, they weren’t even allowed at the same events. Some believe that Stone hired someone to assault his rival, XXXTenetacion (whose real name is Jahseh D. Onfroy).

Selena Gomez may believe it’s better to kill them with kindness, but Drake doesn’t have time for that. When the “Controlla” singer caught wind of the news about the punch heard around the world, he wasn’t exactly offering a shoulder to cry on. The Canadian rapper took to his Instagram to like a comment on the video that read, ” Rockabye baby” with a series of laughter emojis. No one is really surprised since the Toronto native and the Florida rapper have their own beef that stemmed from XXXTentacion accusing Drake of stealing his songs. Drake’s used to those kind of accusations and everyone knows about his more famous feud with Nicki Minaj‘s ex-fiancée, Meek Mill, who blamed Drake for not helping his career.

XXXTentacion updated his fans on his condition via Twitter and he will resume the rest of his Revenge tour, which ends on July 2. Here’s hoping that security is better for the rest of his tour!