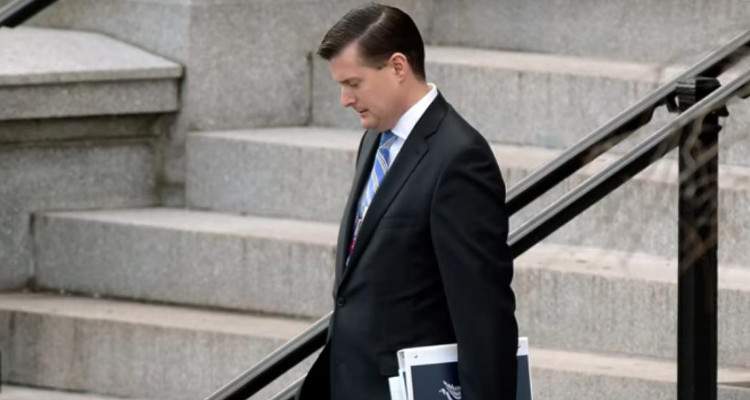 Both of White House Staff Secretary, Rob Porter’s ex-wives have accused him of abuse. After Porter resigned from the Trump administration, people want to know more about Rob Porter’s ex-wife, Jennifer Willoughby.

Rob Porter was not one of the more public figures in the Trump administration until it was revealed that he was dating Hope Hicks, White House Director of Communications. But the attention is now on the former White House Staff Secretary after his ex-wives have come forward and accused him of abuse.

His second wife, Jennifer Willoughby, detailed the alleged abuse in a recent interview. But the interest in Willoughby’s allegations continues to grow, despite Porter’s resignation as Trump’s aide.

Get the scoop with details from Jennifer Willoughby’s wiki, right here!

She Was His Second Wife

Rob Porter was previously married to Colbie Holderness. The 37-year-old is a senior analyst working for the U.S. government.

The couple was married for five years, during which Holderness detailed physical and mental abuse at the hands of Porter. She revealed that his abusive behavior broke her confidence, and she took an extended leave of absence from grad school.

Holderness could no longer stand the abuse and said “that is why I left.” Porter later married Jennifer Willoughby during Thanksgiving in 2009.

Willoughby spoke to Holderness and realized they both went through his abuse.

In an interview, Jennifer Willoughby, age 39, said she was “walking on eggshells” throughout their marriage because of Porter’s unpredictable anger. She gave graphic details about Porter’s abusive behavior during their honeymoon.

Jennifer Willoughby and Rob Porter honeymooned in Myrtle Beach sometime between Christmas and New Year. She alleged that he verbally abused her during the trip.

“We had already been fighting. I had already seen more extreme versions of the overreactions of anger that I had seen back in August,” Willoughby said referring to the time before their wedding.

“I can’t remember what triggered it. He lashed out and was really angry, and both under his breath and explicitly to me called me a ‘f*****g b***h’ and ‘f*****g ridiculous.’ He accused me of not caring about him or not caring about his needs,” continued Willoughby.

Willoughby also said that she spent the entire honeymoon trying no to upset him.

In another incident just after their first anniversary, Willoughby alleged that Porter dragged her out of the shower by her shoulder while she was naked. He verbally abused her, after which she refused to join his family on a vacation.

She Filed a Protective Order Against Him

According to Willoughby, Porter’s anger was unpredictable. He initially claimed that his anger was the result of his first “toxic” marriage, which he was “projecting” on her.

Willoughby alleged the former top Trump aide was manipulative and said, “He would challenge my intelligence or a statement that I had made by implying that I couldn’t have possibly come up with it on my own and that I must have been influenced by someone.”

Porter’s instances of rage were all indoors, according to Willoughby. He never showed his temper to anyone else, even in the form of road rage.

Willoughby saw a therapist and urged Porter to get help for his anger issues. The stress took a toll on her, and she asked for a separation.

Towards the end of their marriage, Willoughby, who was six weeks pregnant, suffered a miscarriage.

In June 2010, Willoughby filed a protective order against Porter. He violated their separation agreement and refused to leave their apartment.

According to the police report, Porter punched the glass of a door and hurt his hand in the process.

She Still Wants Him in the White House

Willoughby is now a motivational speaker for Predictable Success in Washington D.C. She worked with at-risk youth in Fairfax, County Virginia.

Despite their tumultuous marriage, Willoughby wants Porter to work in the White House and said, “I don’t want to be married to him. I would not recommend anyone to date him or marry him. But I definitely want him in the White House and the position he is in. I think his integrity and ability to do his job is impeccable. And the majority of the issues he suffers from are very personal and intimate.”

The motivational speaker has been winning praise for her gracious response on social media. However, her allegations almost cost Porter security clearance.

The FBI interviewed Willoughby and Holderness as part of the 40-year-old’s security clearance. Both women were asked about their marriages with Porter and both detailed the instances of abuse.

However, the former White House Staff Secretary claims the allegations are “simply false.” The White House reportedly backed Porter and Chief of Staff John Kelly only had praise for him.