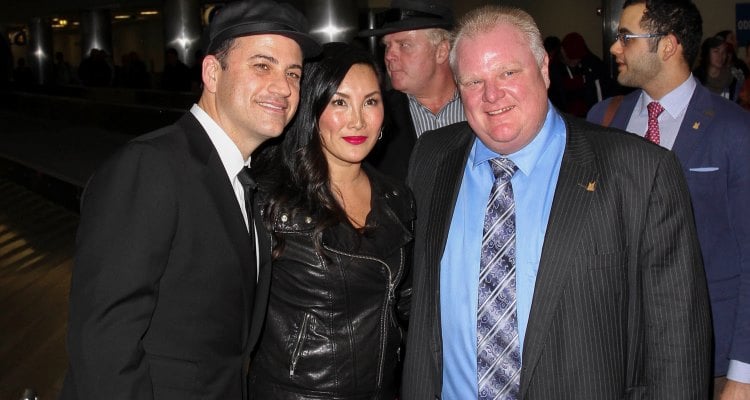 It seems that the late mayor of Toronto, Rob Ford, is making headlines again, even after his passing earlier this year. The video that showed Ford allegedly smoking crack cocaine was released to the public today, after Ford insisted during previous interviews that no such video existed. News of the video’s existence surfaced back in 2013, and the media storm that followed made international headlines. However, the video of Rob Ford smoking crack could not be confirmed as legit, and very few had actually seen it, until now. It wasn’t until October of 2013, that a Rob Ford crack video was actually found by police on a laptop that was seized during a large guns and drugs raid, and admitted into evidence. The video of Rob Ford smoking crack was filmed on a cell phone camera. It showed him sitting down and exchanging incoherent banter, while lighting and inhaling a substance from a glass pipe. So, why is this famed ‘Rob Ford crack tape’ (that was uncovered over a year ago) making headlines again now? Well, as of today (Thursday, August 11) charges against Rob Ford’s occasional driver, Alexander (Sandro) Lisi (who was charged with extortion in alleged attempts to retrieve the video in question) were dropped. With the charges on Lisi dropped, the publication ban that prevented the video from being published has been lifted and the media is sure to have a frenzy now that the infamous Rob Ford crack video is released.

For those who don’t know, Rob Ford was the Mayor of the city of Toronto, Ontario in Canada from 2010-2014. He was under fire in 2013 for a scandal involving him allegedly smoking crack cocaine amongst other personal and work-related controversies during his time as mayor.

Who is Elena Basso?

The house in which the video of Rob Ford allegedly smoking crack is believed to have been filmed belonged to a woman named Elena Basso. According to the Toronto Star, there was speculation that Rob Ford had been paying the utility bills on the home, where he was also photographed with three alleged gang members, including a man named Anthony Smith, who was murdered in March of 2013. The home belonged to the Basso family, which included Elena Basso, and Rob Ford’s close friend (Elena’s brother) Fabio Basso. According to the Toronto Police Department, Elena Basso was a convicted cocaine trafficker and was also convicted of prostitution. After the original surfacing of the video in 2013, a notebook documenting entries on the house regarding maintenance and bill payments was also found by police, who detectives believe belonged to Ford or one of his staff.

The notebook in question, which also referenced contents referring to a “crack house” and “trap house,” led to police search warrants of Alexander (Sandro) Lisi’s home and car. Lisi had previously been charged with drug trafficking, and then extortion, after he made alleged attempts to retrieve the Rob Ford crack video from the man who filmed Rob Ford allegedly smoking crack.

Ford, who passed away on earlier this year on March 22 from a rare form of cancer admitted to smoking crack cocaine in one of his “drunken stupors” but denied he was ever addicted. He also claimed he had never seen the video, confident it did not exist.

When asked about his drug use and the video, Ford stated: “This is why I want to see the videos to see for sure. People who have seen them say I was completely out of it. As embarrassed as I am, I have no idea what I did.” He also added, “No, I’m not an addict, and no, I do not do drugs. I’ve made mistakes in the past and all I can do is apologize, but it is what it is and I can’t change the past. And I can apologize to my family, my friends, my colleagues and the people of this great city. I can’t change it.”

What do you think about the whole Rob Ford scandal, especially now that the Rob Ford crack video was released to the public? Let us know in the comments below.