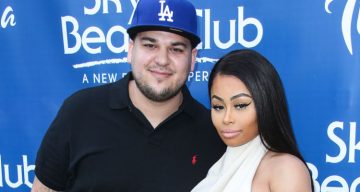 In a sneak preview released a few days ago, several Rob and Chyna spoilers were revealed to viewers. The show premieres on Sunday, September 11 at 9:00 p.m. EST on E!. The Keeping Up With The Kardashians spin-off showcases the trials and tribulations of the soon-to-be-wed couple, as they simultaneously plan the birth of their child, and their wedding. Here are some of the spoilers from Rob and Chyna that you shouldn’t miss for anything in the world!

Is Rob Cheating on Blac Chyna?

The first trailer for Rob and Chyna showed a furious Chyna screaming at Rob over the phone saying, “Are you still texting b*****s, yes or no?”. Allegedly, Rob had been talking to someone behind Chyna’s back; a fact that didn’t sit too well with the pregnant 28-year-old. She checked his phone and saw some questionable messages, which led to the heated exchange between the engaged couple. Chyna asked Rob why he continued to message other women. Blame it on the pregnancy hormones, but Chyna looks livid as she yells at Rob from the car while her friend looks on, concerned. Later, Rob apologizes and sends Chyna flowers, but she’s buying none of it.

this scene gonna go down in pop culture history for being ICONIC! ????☘ #robandchyna

In a candid conversation with his sister Kourtney’s ex, Scott Disick, Rob reveals that he wishes for a son and not a daughter. The two are getting haircuts in a barbershop, when the 29-year-old confesses that he wants a baby boy to carry on the Kardashian family name. “I’m definitely hoping for a boy because I want to have the same relationship that I had with my father with my son. So, that’s what I’m praying for.” Awww!

Rob’s father, the late Robert Kardashian, succumbed to throat cancer at the age of 59 in 2003. Famous for defending O.J. Simpson in the 1995 murder trial, Robert and his son shared a loving relationship before his untimely demise. Naturally, a young Rob missed having a strong patriarchal figure in his life growing up. But, the cat was out of the bag back in July, when it was disclosed that Rob and Chyna would be having a girl. There were also speculations of Chyna carrying twins, which were proved to be untrue.

Guurrrll look at that windswept weave Chyna is slayin! She can literally make her hair swept in the kitchen… in.the.kitchen! ICONIC!???? #slaychynaslay

It seems like Rob is ready to reveal all in the upcoming reality show, Rob and Chyna, as the trailer shows the couple discussing his alleged depression. Rob’s older sister Kim Kardashian makes an appearance during the conversation as a mediator, and their mother Kris is also shown checking on Rob and giving him some motherly love and advice.

Last December, Rob had been hospitalized because of his Type 2 diabetes condition. Refusing to take his medication, he was “nonstop throwing up” and felt like he was going to die. Thanks to Blac Chyna’s TLC, the sock entrepreneur is recovering well. The Rob and Chyna trailer revealed that it was Chyna’s cooking that nursed him back to health. Isn’t that sweet?

Yaaaaaaassss @robandchyna on the cover of this months issue of People magazine! #relationshipgoals ????

In a surprising turn of events, 19-year-old Kylie Jenner may have become Chyna’s new best friend and confidante. Considering their complicated relationship, this news comes as quite a shock to fans. For those who are unaware of their history, Kylie’s current boyfriend Tyga was previously engaged to Chyna, and the former couple share a three-year-old son named King Cairo together. With Chyna and Rob getting married and Kylie dating Tyga, the equation between the couples is bound to be awkward.

Although, it now looks like Kylie and Chyna have moved on from their feud, and Kylie is excited to help Chyna build a nursery for her baby girl. Kylie is one of the few people that Chyna has chosen to share the secret of the sex of her unborn child. A source has stated that “Kylie‘s taken several trips to Build-A-Bear and personally made at least three bears for Blac and Rob’s baby. Kylie has also hired the same company that painted a few rooms in her new house to paint Blac‘s baby’s room. Kylie loves babies and is already spoiling the new family addition, and it’s not even born yet! Blac couldn’t be more grateful and appreciative of all the love her family’s giving her thus far.” It’s truly wonderful that the two women have put their past behind them, and are looking forward to their future as sisters-in-law.

Make sure you don’t miss this year’s highly-anticipated KUWTK spin-off reality show, Rob and Chyna as it will air on Sunday, September 11 at 9:00 p.m. EST only on E!.