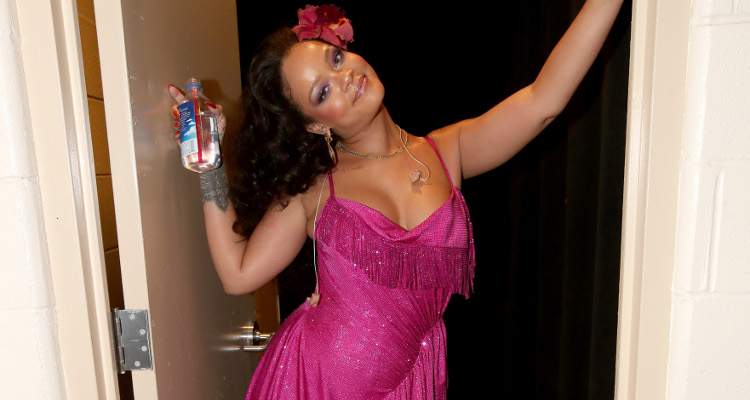 Rihanna’s Grammys 2018 performance sparked a lot of speculation due to her noticeably fuller figure. Now, many people are wondering if Rihanna is pregnant and are discussing it on social media. If you also have the same question on your mind, then keep reading. We have all the information you need, right here.

The Grammy Awards 2018 was power-packed with several artists giving awe-inspiring performances. The awards ceremony was held on January 28, 2018, and James Corden was the entertaining host of the evening.

Singer Rihanna, DJ Khaled, and Bryson Tiller performed their superhit song, “Wild Thoughts.” Although her voice and dance performance were energetic, Rihanna’s weight gain created quite a stir on Twitter.

Many viewers who watched her performance thought that Rihanna was being careful while dancing. They also noticed that she was holding her belly. (Not to mention, her “girls” have gotten noticeably bigger!)

People took to Twitter and expressed their opinion on Rihanna’s performance and weight gain.

Is @rihanna pregnant? She wasn't dancing as hard as normal. She kept holding her stomach and she was looking thick af. She hot af, but I'm thinking for pregnancy rumors are true. #Grammys2018 #Rihanna

Why she gotta be pregnant? Lol, Why it can't be happy weight ? #Rihanna #Grammys

As of now, there is no confirmation that Rihanna is pregnant, and the singer herself has yet to comment on these tweets. So, only time will tell and we’ll just have to wait and see!

Rhianna was out here looking red hot, her performance was red hot and she was living her best life on the stage tonight in @adamselman Who's flyer than RihRih …nobody!!!#livingoutloud #grammys2018 #rihanna #wildthoughts #fashioninspiration #fashionista #style #styleblogger

Nonetheless, Rihanna did really kill it at the Grammys! And, the singer looked gorgeous, as always.

In case you missed out on Rihanna’s performance, don’t worry. You can still watch her mesmerizing and energetic performance by checking out the video below!

Do you think Rihanna is pregnant? Give us your opinion about Rihanna’s Grammys 2018 stage performance in the comments!