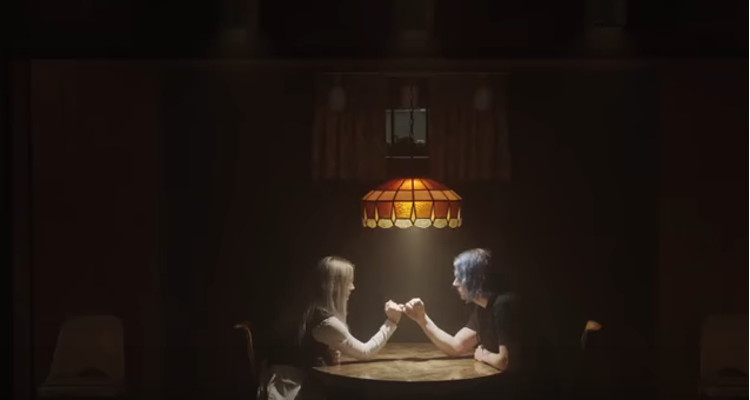 This season of American Horror Story has already given us a series of rather interesting moments. Chaz Bono cut off his own hand, Lena Dunham shot Andy Warhol, Alison Pill mentally manipulated Sarah Paulson, and of course, the return of Twisty the Clown. So as usual, Tuesday’s episode gave us even more surprises, a few major deaths, the inclusion of a new member in the cult, and of course, Rick Springfield as Pastor Charles on American Horror Story.

So, in case you were still wondering if Rick Springfield is on American Horror Story, the answer is yes! It was him! He plays the incredibly creepy Pastor Charles, who we finally got a glimpse of in last night’s episode.

Rick Springfield is on American Horror Story. That’s right! In a telling flashback on Tuesday’s episode, Winter and Kai receive an invitation to the Judgement House of a mysterious person on the dark web. When they get there, Pastor Charles invites them into his lair, which turns out to be a series of rooms where people who have been kidnapped by him are chained, and are gradually being tortured to death in brutal ways. We saw a former drug addict having the drugs he gave up being pumped back into his body, and a woman who went to an abortion clinic bleeding out, while strapped in stirrups. Passing by each room, Winter and Kai try to save the victims. The torture is beyond gruesome and what’s worse is that Pastor Charles takes on a Jig Saw-type persona, and feels that he’s saving them, speaking over the intercom to lecture the people he tortures.

Later, Winter and Kai manage to uncover that the drug addict had actually been sober until the Pastor took him, and the woman was at the abortion clinic to treat an UTI. So, they strap the Pastor down in his torture chair as they decide what to do with him, when Kai decides that death is the only way to get justice. After turning the chair on, knives pierce through the Pastor, killing him instantly, and giving viewers insight into the future cult leader’s first murder.

In Tuesday’s episode, the cult’s clown was finally unmasked, and it was a twist that nobody saw coming! Ally’s the newest member of the cult. It looks like she came up with a plan to get Ozzy back and destroy Kai’s cult from the inside. Ivy’s face when Ally takes her mask off accurately sums up our reaction! What Ally has planned for Ivy is unknown, but we sure can’t wait to find out!

We are sure many more twists and turns are in store as this season of AHS comes to its end, but that’s why we love it so much! We’ll just have to wait to see what happens next as American Horror Story: Cult airs Tuesday nights at 10:00 p.m. EST on FX.