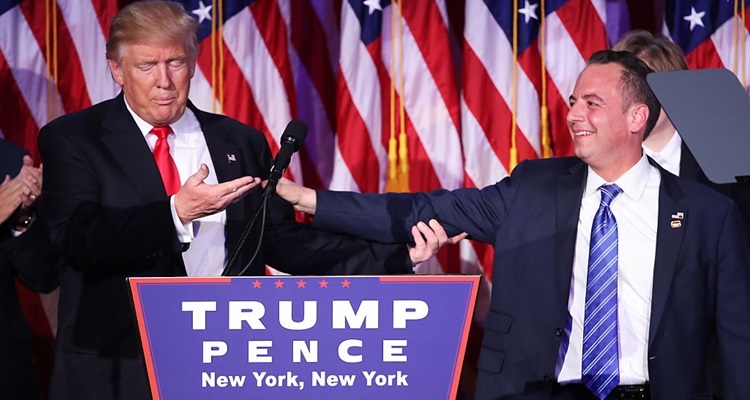 Reince Priebus is one of the first hires of President-Elect Donald Trump. Priebus will serve as the White House Chief of Staff when Trump takes office. He’s known to be the longest-serving Republican National Committee chairman, and best friend of House Speaker, Paul Ryan.

Reince Priebus will be the new White House Chief of Staff when Donald Trump takes office next year. The Republican National Committee (RNC) chairman is expected to assist the President-Elect using his years of experience in the political arena. Trump is a political outsider and will definitely be relying on Priebus and other members of his cabinet during his term. With all the attention on Priebus, it makes us curious about the people who are Reince Priebus’ parents, Richard and Dimitra Priebus.

1) The Priebus’ Have Multi-Ethnic Roots

Richard Priebus was of German and English descent. Rience Priebus’ grandfather was born to German parents from Russia, while his mother had Canadian, English and American roots. This makes Reince Priebus have German, Greek, and English roots.

2) Reince Priebus was Named After His Grandfather

Reince Priebus’ full name is Reinhold Richard “Reince’”Priebus. Reinhold W. Priebus was Reince’s paternal grandfather, born in Michigan to Friedrich Priebus and Amilia Kroll. The name Reince has Greek origins and is short for Reinhold. Reince has constantly joked about his odd name and even takes jokes on it like the good sport he is.

Besides keeping a low profile, Reince Priebus is known for rising from the bottom ranks to the chairmanship of the RNC on his hard work alone. In 2007, he was selected as Wisconsin’s GOP chairman, the youngest person to step into that role. He has also served as state party treasurer and first vice chair of Wisconsin’s Republican Party.

Priebus was first elected as the chairman of the RNC in 2011 and is known as the longest-serving chairman of RNC in modern history. When he took the reins of the party, the RNC had a debt of $23.0 million. But Priebus proved his capabilities by bringing the party out of its financial woes within a year.

His parents also encouraged him to play the piano as a child, and Reince was so good that he won several piano competitions. The 44-year-old still plays the piano to unwind from a long and tiring day.

Reince Priebus married his high school sweetheart, whom he supposedly wooed by taking her to the Lincoln Day Dinner. A political nerd through and through! Reince and Sally Priebus have two children, Jack Priebus and Grace Priebus. During the presidential election campaign, Priebus had joked that he named his children Jack and Grace because “some family traditions are worth killing off and my name is one of them.” Besides playing the piano, spending time with his children is one of Priebus’ escapes from the humdrum of his busy work life.