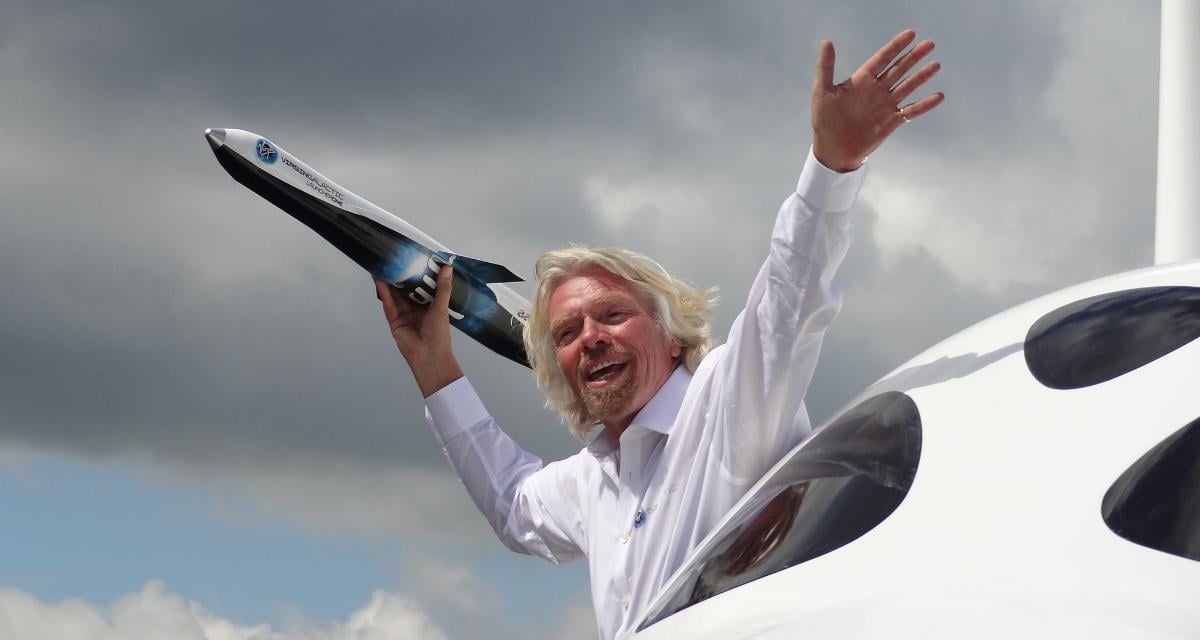 When it comes to billionaires, Richard Branson’s net worth of $4.6 billion(as of January 2016) seems to be on the low end, given amounts like Elon Musk’s $13 billion and Bill Gates’ $79.2 billion. But you wouldn’t know it given how the man uses his wealth and lives his life. Here’s a look at how Richard Branson made those billions.

Born in Blackheath, London on July 18, 1950, Sir Richard Charles Nicholas Branson (he was knighted in 2000) started what would eventually become Virgin Records in, of all things, a church. His record store, which traded under the name “Virgin,” named as such because those involved were new to operating a business, sold music for far less than major retailers, which were under marketing agreements that prevented lower prices.

A “proper” record shop was opened in London, with the proceeds from the store being used by Branson and Nik Powell to found their own label, Virgin Records, in 1972. Purchasing an estate and installing a studio within it that they leased out, the label’s first album, 1973’s Tubular Bells from artist Mike Oldfield, became a best seller. (Oldfield still makes music to this day and was given the rights to all his songs when his 35-year Virgin contract ended in 2008.) Virgin Records would continue to make its mark by signing artists other labels didn’t want to take a risk on and acts that would be considered obscure longshots to ever be signed. Although these were just as risky gambles for Virgin, they proved to do wonders for Richard Branson’s net worth.

Not content with just music, Branson would have his hands in many industries’ cookie jars over the years. His first notable venture outside music was the airline industry, starting with Virgin Atlantic Airways in 1984. But unfortunately, not every venture adds to one’s net worth. While the company enjoyed profitable beginnings, pressure from primary competitor British Airways began to seriously hurt profits to the point that Branson sold Virgin Records to Thorn-EMI in 1992 for around £500 million (US$1.0 billion) to cover the losses. Given it was his starting point, Branson said he cried upon the sale’s finalization, comparing it to “selling your children,” adding, “I mean, you build something from scratch, we had just signed Janet Jackson, we had just signed the Rolling Stones when we sold it, and I remember running down Ladbroke Grove, tears streaming down my face with the check for a billion dollars.” He would later start a new label called V2 Records.S

everal other airlines under the Virgin banner also exist, including Virgin Australia, Virgin America, and even Virgin Nigeria. There’s also a railway line, Virgin Trains, which has been in operation since 1997. Virgin Galactic, dedicated to the lofty goal of commercial space travel, was formed in 2004, though it has yet to accomplish its maiden voyage and one attempt even resulted in a co-pilot’s death in 2014.

Virgin Mobile is another well-known branching out of Richard Branson’s operations, though it was eventually sold and became Virgin Media, not to mention the form it takes differs between countries. There are many other companies both currently and formerly under the Virgin Group banner, which include industries such as travel, hospitality, and, of course, entertainment—but their number is too great to list here.

Richard Branson’s net worth has picked up some extra cash from being a major media personality as well, appearing in numerous TV shows and films, most often as himself and often showing an ability to make a joke at his own expense. He’s also made waves in the media with his repeated attempts to set world records. Many of these attempts have been successful, such as the fastest crossing of the English Channel in an amphibious vehicle (one hour, 40 minutes, six seconds) and a couple involving the use of a hot air balloon.

While Richard Branson’s net worth comes from helping to create a large variety of businesses, he no longer owns or controls a large portion of them. Many were sold, like the aforementioned case of Virgin Records, while others were made public, with Branson only owning a percentage. This isn’t to say he doesn’t keep busy; his most recent efforts include investing in a drone company in late 2014 due to their potential to be an affordable means of improving people’s quality of life, and making an estate on the Virgin Islands’ Moskito Island, which he owns, available to guests for $66,000 a night. He also owns his private Necker Island in the Caribbean.

With his business ventures, awards, media appearances, humanitarian efforts, and more, Richard Branson has lived—and continues to live—an exciting, noteworthy life. And while not everything he does is for the sake of money, Richard Branson’s net worth is enough that he will always be able to follow his desires and support any business, cause, or source of personal amusement he sees fit.