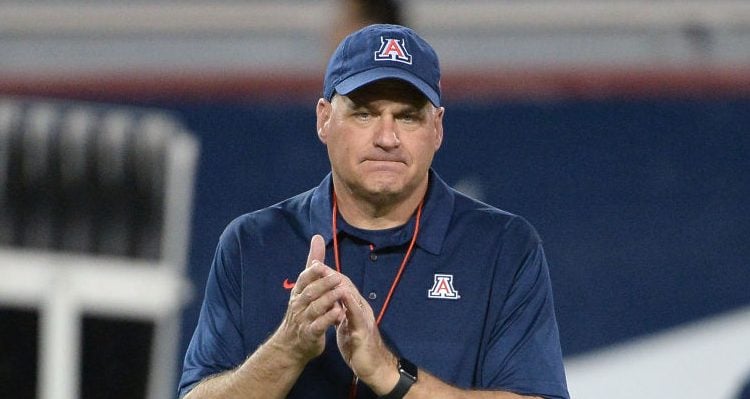 Arizona Wildcats coach, Rich Rodriguez has had a bit of a rough year on the field. And now, it appears that it’s going to get a heck of a lot rougher off the field, as Rich Rodriguez’s assistant and her husband have begun the process of filing a possible multi-million dollar lawsuit against the coach. This comes just days after Rodriguez was fired from the University’s football program. Read all about this emerging story, from Rich Rodriguez’s affair to details about the complaint filed by Rich Rodriguez’s administrative assistant.

The university launched an investigation in October based on those accusations. However, the accuser did not want to participate in the investigation and did not turn over communications that she initially claimed would prove her allegations to be true.

Despite this, the university did find evidence that led them to make a statement which included, “…Arizona Athletics did become aware of information, both before and during the investigation, which caused it to be concerned with the direction and climate of the football program.”

According to reports, Rodriguez was let go, but due to the terms of his contract, the school has to buy him out to the tune of approximately $6.3 million.

Lawsuit in the Works

Despite not wanting to cooperate with the school, Melissa Wilhemlsen has filed a notice of claim, along with Melissa Wilhelmsen’s husband, Jason. This is usually the first step in filing a lawsuit with the state Attorney General’s Office of Arizona.

The lawsuit has been filed for $7.5 million against Rodriguez and his wife. Wilhelmsen is listed on the University of Arizona’s website as the Administrative Associate to Head Football Coach.

Dap from the coach: ?

The claim states that Wilhemlsen and two other co-workers were forced to keep Rick Rodriguez’s extramarital affair a secret, along with harassing her via unwanted touching, which included Rodriguez trying to kiss Wilhelmsen. In addition to this, she also alleges inappropriate sexual comments made towards her by Rodriguez.

Allegedly, Rodriguez would occasionally walk past Wilhemlsen, shirtless and in his underwear, as well as ask Wilhemlsen to come over to his home alone to help him with his dog. Rodriguez’s wife is also involved in the suit, as she confronted Wilhemlsen on at least two different occasions and interrogated her about Rodriguez’s affair.

Due to this toxic environment, Wilhemlsen claims that it began to take a physical toll on her health with migraines and nightmares, as well as causing undue stress on her marriage. Wilhelmsen also claims that she asked the University to reassign her to a different position within the school, but when they refused, she was forced to quit.

Rodriguez has denied most the allegations via a statement made on Twitter. However, he did admit to having an extramarital affair behind his wife’s back.

Rich Rodriguez has also pointed to the fact that Melissa Wilhelmsen had multiple opportunities to be involved in the university’s investigation and turned them down each time.