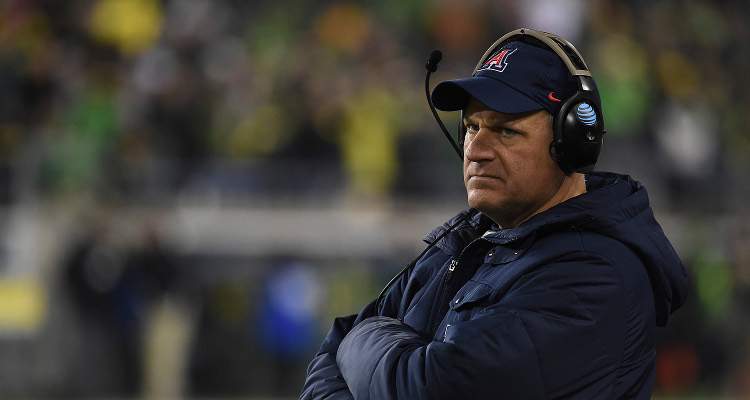 Arizona Wildcats head coach, Rich Rodriguez was fired on January 2, 2018 after allegations of sexual misconduct. He admitted to an extramarital affair, but said he will fight the “baseless charges” about sexual harassment. Here’s what you need to know about Rich Rodriguez’s affair and accuser in a story that has shaken the college football team.

The Arizona Wildcats just lost their head coach, Rich Rodriguez, after “several factors, including the direction and climate of our football program” arose. Rodriguez has seen his fair share of scandal in the past. Read on for details about Rich Rodriguez’s allegations.

Why Was Rich Rodriguez Fired?

Rich Rodriguez, 54, was asked to step down as head coach for the Arizona Wildcats, after being named in a $7.5 million notice of claim that was filed with Arizona state’s attorney general’s office in late December 2017. He is accused of running a hostile workplace.

The university has since fired Rodriguez, who is facing charges of sexually harassing a former employee and running a hostile workplace.

“While this is a difficult decision, it is the right decision,” the university said in a statement. “And it is a decision that lives up to the core values of the University of Arizona.”

Rodriguez was the team’s head coach for six seasons, and released his own statement following his termination saying, “I am not a perfect man, but the claims by my former assistant are simply not true and her demands for a financial settlement are outrageous.”

He mentioned he was fired via e-mail, and was very disappointed at the decision to dismiss him.

Rodriguez’s former assistant accused the coach of involving her in a cover up of his extramarital affair. She was asked to lie to Rich Rodriguez’s cheerleader wife, Rita Setliff. It was alleged that the former employee and two other assistant coaches called themselves the “Triangle of Secrecy” and were forced to protect Rodriguez’s reputation.

His accuser said that the work environment changed and she felt as though she had to “walk on eggshells at work because of [Rodriguez’s] volatility and sheer power over the department.”

Reports even say that he would call her at all odd hours in the night for personal emergencies or changes in travel plans. She apparently suffered migraines due to his actions.

Rodriguez regrets his infidelity, the only allegation he confirmed, saying, “I am still working incredibly hard to repair the bonds I’ve broken and regain the trust of my wife and children, whom I love dearly.”

What’s Next for the Arizona Wildcats?

Rodriguez’s contract gave him job security until at least 2020, but the school reportedly paid a $6.4 million buyout upon his firing. This amount would have been more had he been let go after March 15, as his contract’s master-limited-partnership in a provision would have him entitled to about $3.2 million.

The Arizona Wildcats and University of Arizona said they want to “build a solid foundation for our program and create an identity of Arizona football that the University, Tucson and Southern Arizona communities can be proud of. We’re excited about the future of our football program, and we look forward to introducing our new head coach at the completion of the search process.”