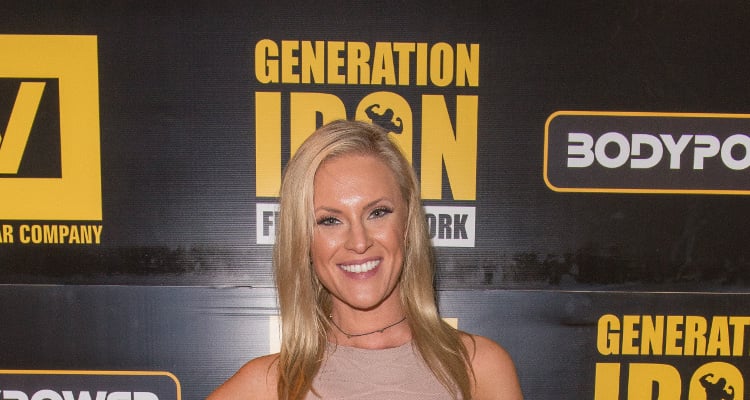 Chanel Jansen is a head-turner no matter where she goes. With her bleach blonde hair and a body most would kill for, the woman is drop-dead gorgeous! Many are likely hearing her name in the news today for the first time, as it has been reported that Rich Piana has died after being in a coma. Jansen stood by her man, but reports are revealing that Piana has passed. Jansen kept his fans informed about his condition through Instagram and is devastated by her loss. Her pictures with Piana show that they were very happy together.

Chanel Jansen is inconsolable because the man she loved is no more. Her bodybuilder boyfriend, Rich Piana, was admitted to the hospital in early August and fell into a coma, believed to be brought on by either excessive steroid use or his addiction to opiates. Despite the best efforts of his doctors and the prayers of his girlfriend, colleagues, friends, and fans, Piana breathed his last breath on Friday, August 25, 2017. Jansen was in the hospital the entire time Piana was admitted, by his side hoping and praying for a miracle that would bring Piana back to his normal health. As Rich Piana’s girlfriend, she did all she could for him. She also communicated with his well-wishers through Instagram and kept them up to date on Piana’s condition. Here are some details from Chanel Jansen’s wiki.

There is no information about Chanel Jansen’s age, but it is believed that she is in her mid-20s. She also goes by the name “Chanel Renee” and was believed to be a Californian girl rolling dice in Las Vegas, Nevada, before she became Piana’s girlfriend. This bleach blonde beach babe was once working as a blackjack dealer on the strip! Today, she is famous as Rich Piana’s girlfriend and also in her own right. Jansen describes herself as a videographer, photographer, and world traveler on her Instagram account. She is a social media star with over 76,000 followers on Instagram and her videos on YouTube are viewed by thousands of her fans. Chanel Jansen’s Instagram account is full of her pictures, where she is dressed in skimpy bikinis, working out at the gym, with her friends, with her boyfriend Piana, and just having fun. Chanel Jansen’s Twitter account is protected so we cannot access it.

I’m so proud of this new design I created for @5percentnutrition with @1dayumay and can’t wait for it to launch! It’ll be out very soon so keep your eyes peeled! We’ve already got my other designs #BrainsBeautyBooty and #GoalDigger available on the website! ????❤???? #curves #beyourownkindofbeautiful #5percentnutrition #5percenters #richpiana #proud #thankful #greeneyes #girlsthatlift #girlswithcurves #blonde #braids #selfie #positivevibes #positivevibesonly

According to reports, Jansen was giving Piana a haircut when he suddenly collapsed in his bathroom. Jansen says that she tried to catch him, but he was too big and heavy for her. She called 911 immediately and was instructed over the phone to give Piana CPR to revive him. Efforts to revive him failed and Piana was taken to the hospital, where he fell into a coma. Jansen says that she knew Piana had struggled with opiate addiction in the past, but thought that he was clean now.

Over the last couple weeks, rumors began circulating that Piana had died in the hospital, but they weren’t true. Jansen diligently kept everybody informed that Piana was still alive and fighting for his life. She wrote, “I will not be posting any updates after this until further notice. I just want to be clear [Piana] is STILL ALIVE. All myself and his family are asking for is POSITIVE thoughts, prayers, and love. PLEASE, I’m BEGGING you all to have some respect and realize how EXTREMELY difficult this is for us. Thank you to all of you staying positive and sending well wishes, prayers, and love. We appreciate it more than you will ever know.” However, despite all efforts, Piana passed away and left behind his grieving fans who had come to love the big man. Jansen had to say goodbye to the man that she was in love with and she had fought for. We offer her our condolences at this sad moment.

Thank you so much @claire_emily_hayes_28 for bringing me my two favorite Aussie snacks!???????? I’ve added up the boxes of Tim Tams people were kind enough to bring me over the weekend…I’m up to 7 boxes so far! ???????? Thank you all so much! Really means a lot to me! ????✌️@1dayumay and I have had an amazing time meeting everyone who has stopped by and look forward to seeing you all again next year! #arnoldaustralia #richpiana #5percentnutrition #5percenters #whateverittakes #johnwesttuna #timtams #happy #laugh