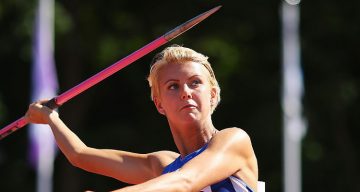 Grete Sadeiko is the happiest woman in the world right now having given birth to her first child, a baby girl named Gloria Griffin. Her fiancé, and father of her child, football player Robert Griffin III is overjoyed at becoming a father for the second time. Sadeiko is a heptathlete who has represented Estonia at the World Junior Championships and the European U23 Championships.

Congratulations are in order for RG3’s girlfriend, now fiancée, Grete Sadeiko who gave birth to a beautiful baby girl on Sunday, July 2, 2017. RG3 is the nickname for Robert Griffin III, a quarterback who plays in the NFL The couple’s baby girl is named Gloria Griffin, and her proud father celebrated her arrival on Tuesday, July 4, 2017 by posting a picture of her, himself, and her mother on Twitter. He captioned the photo, “Welcome to the world Gloria Griffin!!! Your mommy is incredible! We have Real Love. Real Happiness. Real Purpose. 7/2/17 #OurLittleAngel.” Keep reading for some details from Grete Sadeiko’s wiki.

Born on May 29, 1993, in Turi, Estonia, Grete Sadeiko’s age is just 24. She is a heptathlete who has scored a personal best of 5813 points in her event category. Before this, she competed in the World Junior Championships for several years where she had a personal best of 5705 points before breaking her own record at the European U23 Championships. A heptathlon is typically a two-day event which has seven constituents: 200m sprint, 800m sprint, 100m hurdles, high jump, long jump, shot put, and javelin throw. Lucky for Sadeiko, she comes from a family of heptathletes. Her older sister, Grit Sadeiko, is also a heptathlete who participated in the Rio Olympics in 2016.

There is no information on Grete Sadeiko’s net worth but her growing family will be financially stable as Robert Griffin III ’s net worth is a substantial $13.0 million.

RG3 and his ex-wife Rebecca Liddicoat divorced in 2016 and have a two-year-old daughter together. He and Sadeiko have not yet revealed any wedding plans, but the two could not be happier with the arrival of their new baby girl.

I wish that I could have this moment for life?? #Paradise

Announcing the arrival of their daughter, Sadeiko wrote Instagram, “Our little angel was born. Couldn’t have done it without this man by my side, my backbone. Trying to make me laugh every way possible and keeping me entertained through all the pain and doing everything to make me smile and get through this. You deserve a medal baby! Welcome to the world, Gloria Griffin! You are SOOOOO loved by daddy and me! [sic]” Their love is clearly mutual, as made evident with the “Grete Sadeiko” tattooed in cursive on Griffin III’s right forearm.

She’s Got it All

Grete Sadeiko’s Instagram account is full of pictures of her and Robert Griffin III together (mostly kissing), with her family, friends, and practicing on the track. Sadeiko is an athlete in her own right, and is making a name for herself. She enrolled in Florida State University in 2012 to study psychology. Sadeiko seems to have it all; looks, brains, and plenty of accomplishments. With a new baby in his arms and a lovely lady by his side, Robert Griffin III is currently on cloud nine. Congratulations to the happy couple!