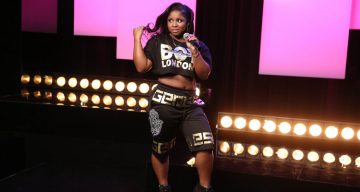 There are rumors circulating that Lil Wayne and his ex-wife, Toya Wright may get back together. For now it is just a rumor, but his daughter seems to be pretty excited as she and her boyfriend decided to dress up as Toya Wright and Lil Wayne for Halloween this year!

Lil Wayne’s first child (and only daughter), Reginae Carter was born on November 28, 1998 in Louisville, Kentucky and is 17 years old —only one year older than Lil Wayne was when she was born! Carter’s mother is Toya Wright, Lil Wayne’s high school sweetheart.

Reginae Carter is named after Lil Wayne’s stepfather Reginald. Her parents got married in 2004, however, the pair divorced in 2006. To date, the pair remain amicable for the sake of their daughter and both of them have raised her together.

Reginae Carter is a hip-hop and R&B singer, whose stage name is Baby Carter. She made her debut in 2014 with her first single, “Mind goin Crazy.” She was also a part of R&B girl group called OMG Girlz.

Cameron Carter is Lil Wayne’s third child. Actress Lauren London gave birth to him on September 9, 2009 in Los Angeles. Landon and Lil Wayne were once engaged, however parted ways due to differences.

Neal Carter was born on November 30, 2009 to mother Nivea B. Hamilton. Both Hamilton and Landon prefer their sons to be kept away from the press.

Currently Reginae is dating Joshua Brown, an 18-year-old football player from Atlanta, GA. The pair have been dating since January 2014 and seem to be going pretty strong. You can find Joshua Brown and Reginae Carter pics from Halloween with the couple dressed as Carter’s parents.