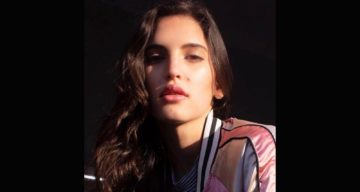 Patrick Flueger recently enjoyed the perks of mixing his personal life with work, thanks to the appearance his girlfriend made on Chicago P.D. The actor who plays Adam Ruzek dated a few popular actresses before he began his relationship with Reem Amara. You might recognize her as the ICU nurse in the latest season. She’s another rising actress, with the most supportive boyfriend. This Reem Amara wiki will reveal just why you need to watch out for this starlet.

Reem Amara was born on September 25, 1995 in Dubai, United Arab Emirates. The Jordanian-American is the youngest of five children born to Carolyn Lena Mickley and Humam Amara.

Growing up, Reem lived in the U.S., Jordan, Egypt, UAE, and Iraq. Her family resides in Chicago, Illinois, where she was also based. She now lives in Los Angeles, California, where she is pursuing acting.

Reem’s sister, Dalia Amara, is an artist skilled in photography, video making, performance, and sculpture. She is based in New York where she earned an MFA at the School of Visual Arts.

Reem Amara moved to Los Angeles in pursuit of a career in front of the camera. While her shots on Instagram show she dabbles in modeling, she also has a steadily rising acting career.

She appeared in the short films Midland: Drinkin’ Problem and Modulation Nowhere in 2017 and 2019, respectively. And she can now add her appearance in Chicago P.D. in 2020 to her resumé.

Patrick Flueger previously dated Carly Pope, his costar from The 4400, which gave him his breakout role. After they broke up, he dated Step Up 2 star, Briana Evigan.

Evigan and Flueger co-starred in the 2010 horror flick, Mother’s Day. They even had a red-carpet date to the Footloose premiere.

After their breakup, Flueger’s romantic life seemed to lack any occurrences until 2018. He was revealed to be dating Reem Amara after she began featuring on the actor’s social media.

And perhaps working together is in the cards for this couple, since Amara featured on Chicago P.D. season 8. Flueger gave his girlfriend, who played an ICU nurse, a shoutout on Instagram, which has his followers swooning. Maybe Reem Amara could be a frequent guest star on Chicago Med?