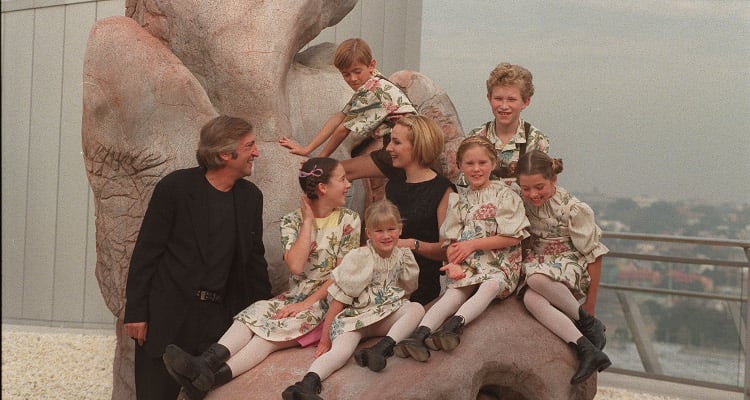 Watching The Sound of Music is a major holiday tradition for many, and this year isn’t any different. ABC aired the classic last night and once again, we cheered on the Von Trapp family in The Sound of Music as they escaped Nazi-ruled Austria. The film is inspired by a true story, so if you’re wondering where the Von Trapp family is now, keep reading.

The Von Trapp family became instant celebrities when The Sound of Music released in 1965. The story of a singing nun and a widowed naval officer with seven children struck a chord in the hearts of fans, and over 50 years later, it still doesn’t fail to inspire!

Feisty and fearless, Julie Andrews stole our hearts in The Sound of Music with her beautiful singing and endless energy in picturesque Austria. The real Maria Von Trapp was all of that and more, as her autobiography revealed.

The movie made the real Von Trapp family famous, but in typical Hollywood style, many of their stories were made larger-than-life.

Johannes Von Trapp, the youngest son of George and Maria Von Trapp, said, “It’s like the parlor game where you whisper a word in your neighbor’s ear, and he whispers it, and it goes around the room —by the time it comes back it’s usually changed a bit.”

“In the real family my oldest sister was Agatha, and she was a very introverted person, and the thought of her doing that song and dance routine with the telegraph boy had us all rolling in the aisles in stitches,” he added.

There were other changes, but a major chunk of the movie was about the true story of the Von Trapp family’s singing accomplishments. The children were already musical before Maria came along, and she sharpened their skills. The family sang on the radio, in concerts in Vienna, and began touring around Europe after they rose to fame in a festival in 1935.

Johannes Von Trapp went on to add that music was a significant part of his family’s life even off-stage.

“I can remember times I’d be washing the pots and pans in the kitchen and my sister Hedwig had been cooking, and we’d start singing and harmonizing, and then another family member would come and join us. And soon the guests would leave their tables and come into the kitchen to hear us sing,” he said.

After Germany took over Austria in 1938, the family found it difficult to continue living under Nazi-rule.

Unlike the scene from the movie where they escaped to the mountains in Switzerland, the family actually left Austria by train to go to a concert. From there they traveled to Italy, England, and finally by boat, to New York.

They left everything behind and came to America with only a few dollars to start their lives over. The family continued performing, and in 1942, bought a 300-acre farm in Stowe, Vermont, where the Von Trapp Family Lodge runs even today.

The Von Trapps continued touring the world, and conducted music camps and hosted guests at their lodge.

Where Is the Von Trapp Family Now?

George Von Trapp died in 1947, Maria Von Trapp passed away in 1987, and four of the Von Trapp siblings are buried in their Vermont property. But the Von Trapp family story doesn’t end here.

George and Maria’s great-grandchildren kept their singing legacy alive by performing as a quartet based in Portland, Oregon.

Johannes Von Trapp owns and operates the Von Trapp Family Lodge in Vermont. A fire destroyed the original structure in 1980, but it has since been rebuilt, and it gives a beautiful glimpse into the family’s life.

The Von Trapp Family Lodge now spreads over 2,000 acres and includes a brewery. Their Instagram account has some gorgeous pictures that take you back to the rolling hills of Austria. This place is somewhere we’d love to be right about now!

The concert meadow is greening up for the season! #gostowe #thehillsarealive

The Bierhall table we'll be occupying after our ski – Trapp Trails are open!!

The @nataliemacmaster_donnellleahy concert last Sunday in the Meadow was nothing short of spectacular. Will we see you at the next @stoweperformingarts performance? ?: Wieler Consulting