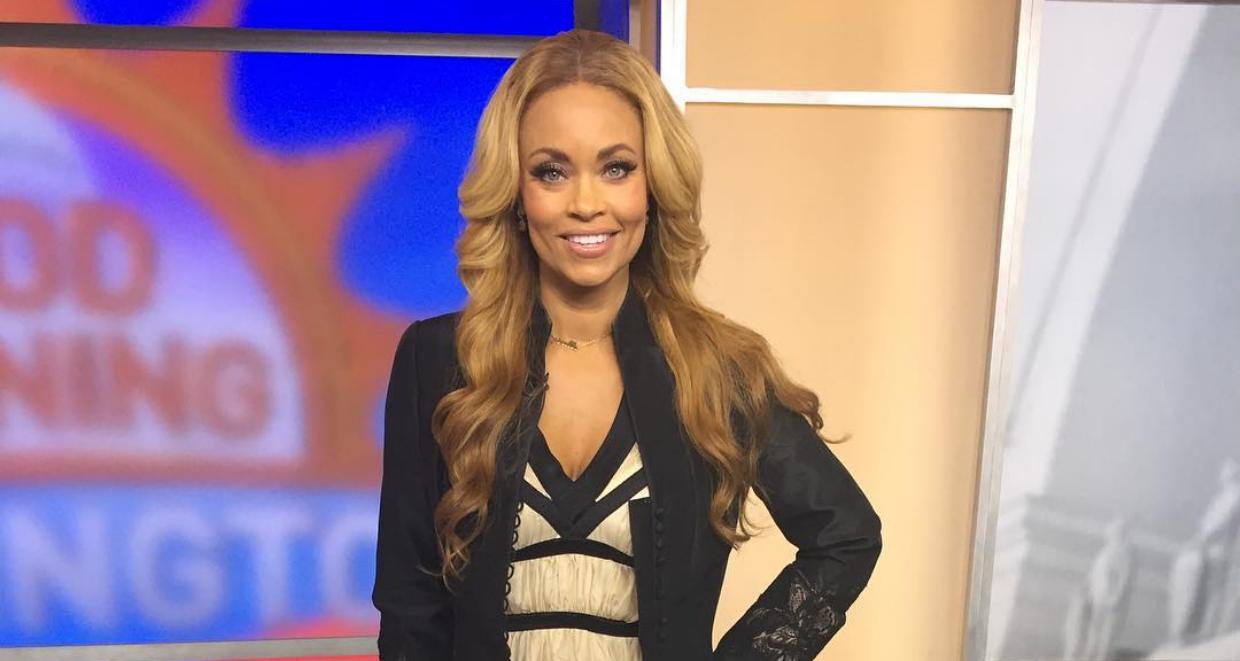 Currently, The Real Housewives of Potomac is in season three, and the episodes promise a lot of drama, tears, and of course major slaying too! One of the most loved stars on the show is Gizelle Bryant. She has achieved quite a name for herself on the show, and now, people are curious to learn about her life. Keep reading to know more about Gizelle Bryant from The Real Housewives of Potomac.

Gizelle Bryant is a famous reality star who is a part of the hit reality TV series, The Real Housewives of Potomac. Amid all the drama on the show, Bryant did face a lot of problems in her personal life, when her ex-husband, Jamal Harrison Bryant cheated on her. However, she stayed strong for the sake of her daughters.

Right now, Bryant is an independent woman, who is working hard and wants her daughters to have a good life. Bryant resides in Potomac with her daughters.

Before Becoming a Reality Star

Born on September 9, 1970, Gizelle Bryant’s age is 47. Bryant was born to Curtis Graves and Joanne Graves, and she grew up in D.C. with her two siblings.

Her father, Curtis Graves, was a pioneer in the beginnings of the Civil Rights Movement. He worked with Dr. Martin Luther King Jr., and in 1974, Graves went to Washington, D.C. in 1974 and worked for NASA. Initially, he worked in the agency’s Academic Affairs Division and later on he served as the Director for Civil Affairs.

Bryant graduated in 1992, from Hampton University with a degree in Marketing and while studying, Bryant was a member of the Alpha Kappa Alpha sorority. After her studies, she joined the NAACP as an events planner.

Shortly after completing her graduation, Bryant got married to Jamal Harrison Bryant. According to sources, the pair got married in 2002. Jamal is an African-American pastor of the Empowerment Temple AME Church in Baltimore, Maryland.

Jamal graduated with an MA of Divinity degree from Duke University in Durham, North Carolina. He also ran for the Congress.

The couple have three daughters together. Jamal Harrison and Gizelle Bryant’s kids’ names are Grace, Angel, and Adore. In fact, Jamal also has two kids from his previous relationships.

According to reports, Jamal cheated on Gizelle, and she decided to walk out of their marriage. In an interview, Jamal explained that when Gizelle chose to end their marriage, she said, “I didn’t divorce you because of the infidelity. I divorced you because I no longer recognized you.”

She further said, “You went into a dark place, was mad with the world, and you were just worried about saving your career – not saving the marriage.”

After being married for almost eight years, Gizelle and Jamal filed for a divorce in 2008 and in 2009, it was finalized. Before filing for a divorce, Gizelle decided to give Jamal a second chance. In an interview, she revealed, “At the time, I had two 1-year-olds and a 2-year-old. Three girls. They’re beautiful. And I said, ‘I’m not doing this. I’m not gonna be disrespected. So yes, I packed up and left.”

Gizelle explained that she decided to wait it out for a year before calling it quits with Jamal. She decided to work things out and gave him the benefit of the doubt. “I decided to give it a year to say to myself, ‘OK, am I going to try to work this thing out? Is this gonna happen when my kids are in high school, and then I leave?’ I just felt like it was time.”

However, Gizelle disclosed that despite all the drama and fights, both her and Jamal are good friends and are raising their daughters amicably.

Being a single mother and entering the dating field can be quite intimidating and scary, but it was easy for Bryant. After going on several dates, Bryant started dating former NBA Star, Sherman Douglas.

They met each other at the gym and Bryant revealed that Douglas was attracted to her as he sat behind her in a class at the gym.

Even though he had his eyes on her, it was Bryant who made the first move and went on to say hi to him. Their first date was at a Starbucks because they wanted to know if they even wanted to go on a first date. Bryant now has a nickname for her guy, which is “Sherm-Sherm”.

In a recent clip of Real Housewives of Potomac, Bryant revealed that she is ready to live with Douglas in the future and wants to blend their families. Douglas also has three kids from his previous marriage.

Gizelle Bryant on The Real Housewives of Potomac

The Real Housewives of Potomac premiered on January 17, 2016, on Bravo. It centers around the lives of wealthy women living in Potomac, Maryland. Bryant has been a part of the show since season one.

Along with Bryant, other housewives who are on the show are Ashley Darby, Robyn Dixon, Monique Samuels, Karen Huger, and Candiace Dillard. Initially, Bryant’s dad was not really happy with her doing a reality show. She explained that at first he was a little skeptical, but later on, Graves said that he trusted his daughter and supported Bryant’s decision to do reality TV.

On the show, Bryant is very close to Robyn. In fact, in an interview, she defended her friend by saying that Robyn is perfect and she loves her to death. When it came to giving her friend relationship advice, Bryant wants Robyn and her husband to spend some time apart and figure out if they want to be with each other.

Besides appearing on The Real Housewives of Potomac, Bryant sold her own line of baked goods to Top Chef contestant Timothy Dean’s restaurant, Timothy Dean Burger.

In between, Bryant announced that she is currently working on her book, in which she will spill some tea on the faith-based world.

The book is about Gizelle Bryant and ex-husband Jamal’s marital life. As of now, there is no news about when the book will be out.

On the radio show, Breakfast Club Power on 105.1 FM, Bryant excitedly spoke about her new makeup line. She explained that, “brown women have been forgotten in the world of beauty.”

Bryant, along with Karlene Damallie, Erika Liles, and Sophia Rabkin started the makeup brand, EveryHue Beauty for women who come in all sizes, shapes, and complexions. Her makeup line was launched in 2016.

Their product offerings include tinted moisturizers for people with different complexions. They also offer foundation brushes, which makes the process of putting on makeup very easy and smooth. Additionally, they also sell concealer, face palettes, setting powder, and setting spray.

The best part about their products is that their HueNation collection is available at Target! 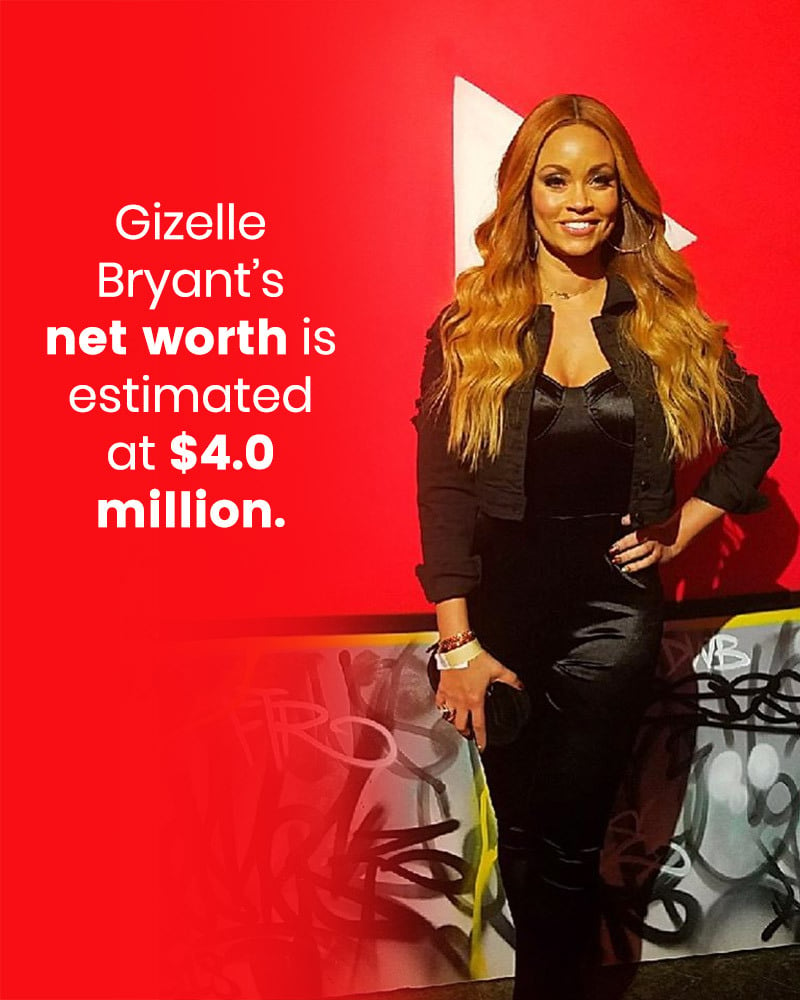 With so many things going on, it comes as no surprise that Gizelle Bryant’s net worth is estimated at $4.0 million, which will keep increasing with time. 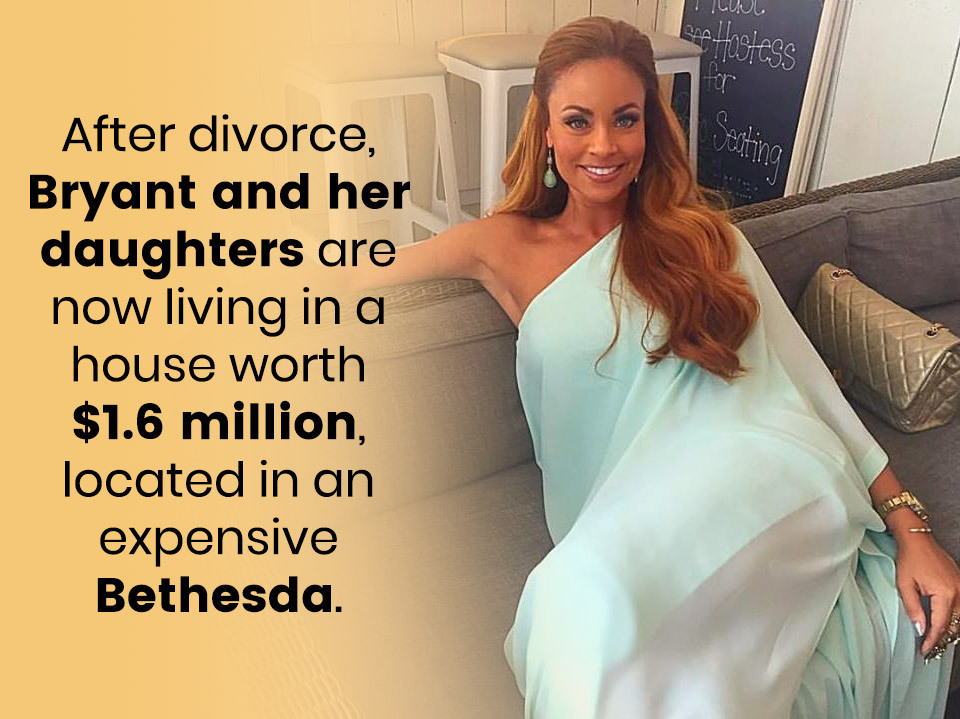 When she was married to Jamal, Bryant lived in a $1.5 million waterfront condo in Baltimore’s upscale Canton neighborhood. In fact, they were known to have an enviable lifestyle, with their car collection including a Bentley.

After her divorce, Bryant and her daughters are now living in a $1.6 million, five bedroom house located in an expensive Bethesda, that borders Potomac.

Besides showing off her beautiful house and lifestyle on The Real Housewives of Potomac, Bryant also dedicates her time working on several philanthropic projects.

In the past, she has worked with the Birmingham City Council to assist with environmental advocacy and redevelopment of the Alabama City. She helped in promoting public education. 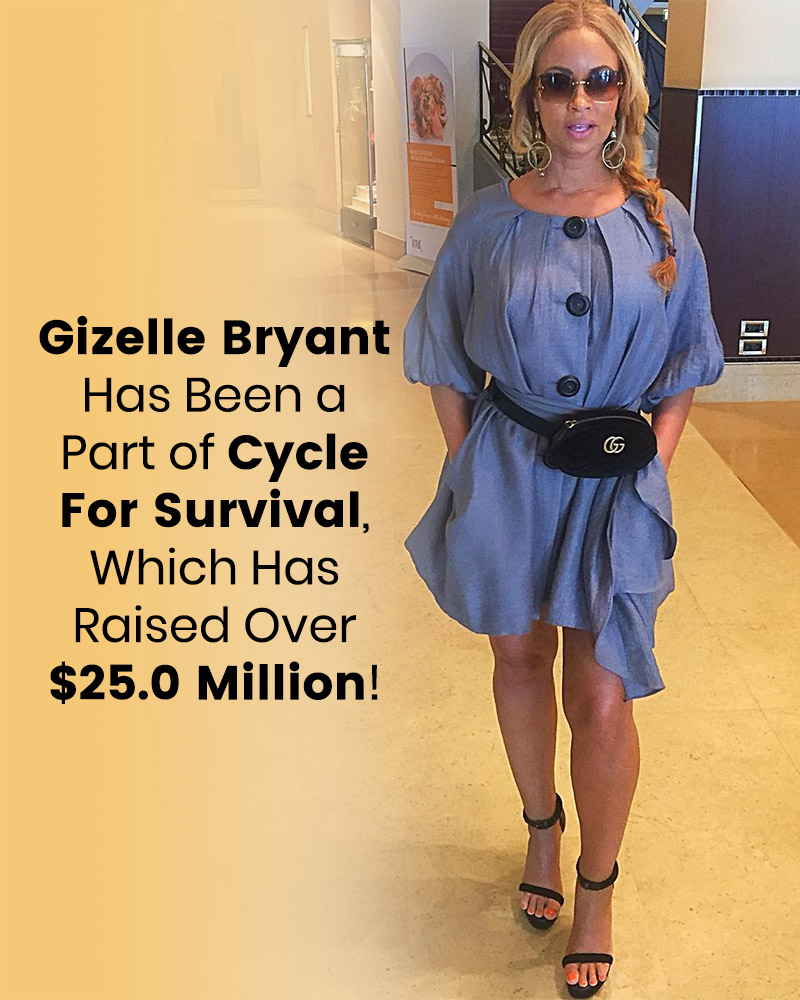 Additionally, Bryant also supports actor Hill Harper’s Manifest Your Destiny Foundation, which aims to work in service of youth. Bryant has also been a part of Cycle For Survival for almost two years now, where they have raised over $25.0 million! Bryant has also appeared on the New York Stock Exchange.