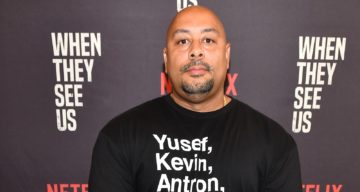 Raymond Santana attends "When They See Us" Atlanta screening at The Gathering Spot on May 30, 2019 in Atlanta, Georgia. (Photo by Paras Griffin/Getty Images for Netflix)

Raymond Santana Jr. sent a tweet to Ava DuVernay in 2015 and four years later, the acclaimed storyteller released When They See Us. Now streaming on Netflix, the four-part series documents the coerced confessions, wrongful convictions, and ultimate exoneration of the Central Park Five, the collective name given to Santana, Korey Wise, Antron McCray, Kevin Richardson, and Yusef Salaam. The groundbreaking series also highlights the relationship between Raymond Santana, portrayed by Marquis Rodriguez, and his father, played by John Leguizamo. Our Raymond Santana wiki traces the life of one of the youngest of the Central Park Five.

Raymond Santana Jr., born on September 7, 1974, was the only Latino teen among the five youths dubbed the Central Park Five who were arrested in the 1989 Central Park Jogger Case. The case involved the assault and rape of a white female jogger, Trisha Meili, in Manhattan’s Central Park.

Initial police investigations focused on the juvenile males in the park during the assault. Santana, then 14, was arrested along with the oldest, 16-year-old Korey Wise, Antron McCray and Yusef Salaam, both 15, and Kevin Richardson, 14. All the teens were persons of color.

In a Reddit AMA, Santana was asked if they were read their Miranda rights at the time of their arrest. To that he responded, “Miranda rights were read. But as a 14 year old kid, who was put in a situation where he does not know what is going on, it went over my head. And so also you know the police, when you are put in a situation like that and you have nothing to hide, they encourage that, they say well if you have nothing to hide you can talk to us. But as a 14 year old kid, you don’t really know what Miranda is [sic].”

After prolonged interrogations, the four of the five teens gave videotaped confessions admitting to the crime. (While Salaam verbally admitted to involvement in the crime, he never signed a confession or agreed to be videotaped.) Though each of their confessions differed in several key details, they were presented as evidence against them in court.

Santana said they hadn’t eaten or drunk anything in over 10 hours during the interrogation. They were mostly confused about the events. He says they were worn down until police got a confession.

“You also have to look at the physical, no food, no drink, no sleep,” Raymond said about admitting to the crime. “At the end of the day, when a kid tells a lie the parents know, and so do authority figures. So they started to feed you what they thought were the facts. Like for instance they said ‘Something was used Raymond. A brick, a rock, or a pipe.’ and so ultimately I said a brick. So they went and got a brick and they presented a brick at trial even though there was no blood on it [sic].”

DNA evidence didn’t adequately prove that the teens were guilty, but was still used against them. As Santana shared about the DNA analysis initially done in their case: “[I]t was done and it proved early that we were not the perpetrators in this case, but due to the public outcry, the headlines were so outrageous that people just bypassed it and ignored it.”

The teens recanted their video confessions and said they had been coerced. Prosecutors said the confessions were not coercive.

Santana Was Tried as a Juvenile

The following year, the teens were convicted of rape and assault. Santana was tried as a juvenile and sentenced to five to 10 years.

Before their convictions, the Central Park Five were subjected to a harsh media trial, with some of the public even calling for the death sentence. A younger Donald Trump also paid for full-page newspaper ads advocating for the death penalty for them.

Public sentiment was largely against the Central Park Five, vilifying them and calling for them to be tried as adults. The highly publicized case also led to many youth of color being subjected to racist assumptions and mass hysteria created by the “wilding” phenomenon.

Wise was the only teen tried as an adult and suffered the harshest punishment.

In 2002, a convicted serial rapist and murderer, Matias Reyes, admitted that he alone had committed the assault on Meili. Days before her rape and assault, Reyes had committed a similar crime near Central Park.

DNA from Meili’s case matched Reyes and proved he was the real culprit. The hair prosecutors said belonged to the victim that was found on the teens was found not to be a match to Meili. With all the evidence, Reyes was sentenced to life for his crimes.

On December 19, 2002, the Central Park Five were exonerated of the crimes for which they were wrongfully convicted. By that time, Santana had spent five years in prison.

The five of them won a $41.0 million settlement against the New York City for their wrongful conviction in 2014.

Don’t Miss: Asante Blackk Wiki: The Actor Who Plays Teen Kevin Richardson in “When They See Us”

Before their exoneration, the Central Park Five had served nearly all or part of their prison sentences. Santana was able to study and get his degree while in prison.

He is still re-adapting to civilian life since coming out of prison. Before the civil lawsuit with the city was settled, Santana said he was under constant scrutiny. “I can’t enjoy life like the average person because the media is always looking for me to get into something negative so they can put it in the paper so they can say something like we told you he was guilty, he’s not that innocent.”

He relocated to Atlanta, Georgia where he lives with his daughter, Melleah Symone, who turned 15 in April 2019. He also appears to be in a relationship with a woman named Nekesta Samone Shelton. Though he no longer resides in the city, the Harlem native has never let go of his roots.

The ordeal also changed his dynamic with his father, who he says developed a drinking problem after seeing his young son go to jail.

“[My father] still probably blames himself, but he doesn’t speak about it,” Santana noted. “Our relationship is good, but it’s a little different because, as a parent, when you have a child, you want to instill these values and morals on how to navigate through life. And he never got that chance to give me that; I grew up in the system. And then here I was, I come back and now I’m a man who doesn’t want to take orders. And I think that might be the only issue that we still have. I don’t call him and say, ‘I got this problem, how do I solve it?’”

Neither Santana nor the other exonerees have spoken to the Central Park jogger, Trisha Meili. In the Reddit AMA, Santana said, “For over 13 years she has been told a lie that we were still guilty because she befriended prosecutors and detectives in this case, and so we never pushed the issue to meet with her, but if she ever wants to talk to us our door is open.”

Santana Reached out to Ava DuVernay

Back in 2015, Raymond Santana reached out to Oscar-nominated filmmaker Ava DuVernay via Twitter. He suggested her next project could be on the Central Park Five.

Fast forward to 2019, and DuVernay has delivered the critically acclaimed Netflix series When They See Us.

“Ava was always my choice to do this series. I never met the woman, I didn’t even know who she was,” Santana said about reaching out to the talented director. He further said that watching DuVernay’s Selma “told me that she had no fear of telling the truth.”

Marquis Rodriguez, a regular on Netflix’s Marvel shows and signed on to the Game of Thrones prequel in the works, portrays the young Santana. Newcomer Freddy Miyares plays the older Santana.

The series also depicts the children’s relationships with their parents and what their families go through. John Leguizamo plays Raymond Santana Sr., who helps his son weather grueling interrogations.

It all started on @Twitter four years ago when Raymond Santana hit me with this question. The rest is their history. Finally told. Thank you, Raymond, Korey, Kevin, Yusef and Antron for trusting me. My brothers. #WhenTheySeeUs pic.twitter.com/t4mcWUITdr

Santana Founded His Own Apparel Company

Several years after his exoneration, Santana founded the Park Madison NYC clothing company. He designs the clothing himself, including a T-shirt that features the names of the other Central Park Five members.

Proceeds from the sales of the tee go to the Innocence Project, a non-profit legal organization that works towards exonerating wrongly convicted people and also advocates for criminal justice reform.

Santana Is Now an Activist

Since his ordeal, Santana has become a voice for others like the Central Park Five. He passionately champions the reform of the criminal justice system and the recording of all interrogations.

The Central Park Five exonerees support the Innocence Project. Santana is also a member of the New York City Justice League and protests against police brutality.

Along with Yusef Salaam, Santana talks with students through speaking engagements.

Former prosecutor Linda Fairstein still maintains that the Central Park Five are guilty of the rape. The release of When They See Us has ignited a firestorm of backlash against the now-decorated author. Even Santana has supported the boycott of Fairstein’s books and many honors.