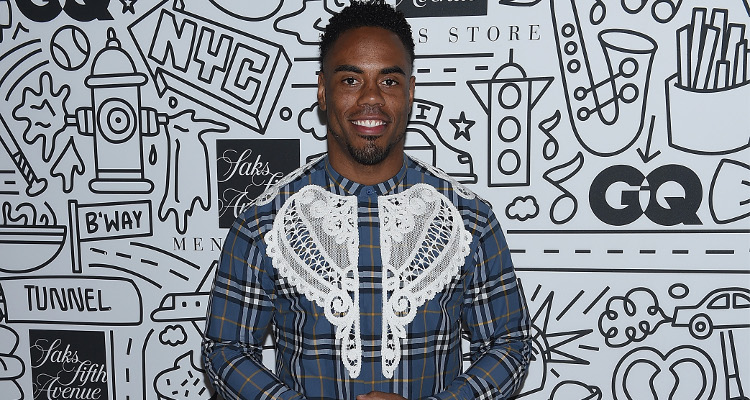 Monday’s episode of Dancing with the Stars was an emotional one. Rashad Jennings and his partner, Emma Slater, did a contemporary dance to Katy Perry’s “Unconditionally,” which was dedicated to his father. During rehearsals, Rashad opened up about his father and emotions began to boil over. He said, “My dad was closed off when I was younger. Any time you would try to get closer to him, he would turn to alcohol.” Rashad further added, “His idea of love was to provide financially. He provided, and faded away.”

Rashad even had a full scholarship to college and was considered by the NFL Scouts. But he received a call from his family saying that his father had a stroke, and his leg had to be amputated because of complications with his diabetes. Rashad decided put his dreams on hold and went back to be with his family during this difficult time. His performance with Emma on DWTS was truly mesmerizing and each of the judges were impressed and touched by it.

Rashad is a perfect example of being versatile. Even though he is a football player, he is also a very talented dancer. If he wins the Mirrorball Trophy, there will definitely be an increase in his current net worth.

How Rich is Rashad Jennings?

Rashad Jennings’ net worth is estimated to be $6.0 million. At the very young age of 31, Rashad has already accomplished a lot. In 2014, he signed a four-year $14.0 million contract with the NY Giants, which included $3.0 million guaranteed at signing. Besides getting paid to play, he also earns a good amount of money due to endorsements and sponsorships. In 2015, Rashad’s salary was estimated to be $2.2 million and he made $279,375 from endorsements.

Also Read: Erika Jayne on “Dancing with the Stars” 2017: Erika Rises to the Challenge!

Rashad Andre Jennings was born on March 26, 1985, in Forest, Virginia. His parents are Deborah Jennings and Albert Jennings. Rashad’s father also had a scholarship offer from the University of Nebraska, but turned it down to join the U.S. Air Force and financially provide for his family. Rashad has two older brothers, Bryan and Butch, and says that he is very close to his family.

Rashad went to Jefferson Forest High School in Virginia. He started his football career as a junior in high school. Despite describing himself as a 270 lb “chubby kid with asthma and glasses,” Rashad was spotted by a scout from the University of Tennessee who told him, “Son, you have potential… Get your grades right!” after learning the fact that his GPA was a mere 0.6!

Due to the encouragement, he and his brothers thought it would be an excellent idea for Rashad to transfer to Lynchburg Christian Academy. During his time at the University of Pittsburgh, Rashad played football at Liberty.

Racism is deeper then skin and flesh. Racism is more than economical systems. Racism touches what Satan tries to steal. Racism is a matter of the heart. Thank you @RISE for allowing me to be part of the convo.

In the 2009 NFL Draft, Rashad was drafted #250 by the Jacksonville Jaguars. He played for Jacksonville from 2009 to 2012. After that, he played for the Oakland Raiders in 2013. From 2014 to 2016, Rashad played for the New York Giants. Although he is currently a free agent, as his contract with the NY Giants ended on February 13, 2017, he has 23 career touchdowns. Throughout his football career, Rashad Jennings had more than 3700 rushing yards and 191 receptions.

You don't "have" to drink to have a good time… ? #ShadCouture

"Before I go" Remember God makes no mistakes. I humbly want to thank the entire @NYGiants organization top to bottom, Giants fans across the globe, and my FOREVER teammates for making my 3 years in NY special. I don't know where my next landing spot is yet but I do know one thing; I'll be exactly where I'm suppose to be. #ToGodBeTheGlory

At this time, Rashad Jennings is concentrating on taking home the Mirrorball Trophy with his Dancing with the Stars partner, Emma Slater. Rashad is not married, but has been linked to numerous celebrities in the past, the latest being reality TV star, Angela Simmons. However, reports show that he is single.

Also Read: David Ross on “Dancing with the Stars” 2017: The Possible Dark Horse This Season

Rashad Jennings on Dancing with the Stars

This dance tonight will be emotional… #TeamShadSquad

For Season 24 of Dancing with the Stars, Rashad Jennings is paired up with professional dancer, Emma Slater. If you ever thought that football players were incapable of showing off some killer moves on the dance floor, then you are mistaken! (Though some of those touchdown dances can get pretty impressive!) During the season premiere of Dancing with the Stars, Rashad and Emma captivated the judges and the audience with their brilliant dancing skills. Although it has only been four weeks, Rashad and Emma have already delighted the judges with their spectacular performances!