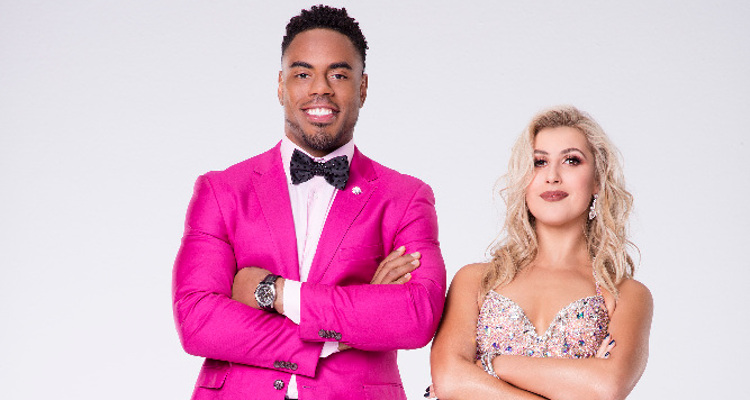 With a diverse cast, Dancing with the Stars season 24 is bringing pro-athletes to the dance floor. While Olympic gold-medalist Simone Biles is one to watch, NFL’s Rashad Jennings and his partner, Emma Slater are proving to be early fan favorites.

The ballroom officially opens for business tonight as Dancing with the Stars season 24 premieres on ABC. NFL running back, Rashad Jennings has left the football field for the ballroom, and traded his New York Giants jersey for a glitzy suit. And since he’s no stranger to competition, he’s pulling out all stops for the Mirrorball Trophy. He’s partnered with Emma Slater who hasn’t won a trophy yet, despite being a regular since season 17. Making things interesting, her fiancé, Sasha Farber, is partnered with another athlete this season, Simone Biles. What do Rashad Jennings and Emma Slater have in store for Dancing with the Stars when the new season premieres tonight?

Monday night we live… literally! Tune in Monday 3/20 at 8pm to root for @EmmaSlaterDance and me live on @DancingABC ! #DWTS #TeamShadSquad pic.twitter.com/JyH4Tamyg5

The 31-year-old Rashad Jennings was let go by the New York Giants in February this year and is currently a free agent. It appears to have been a good thing because now he can focus on winning another competition. Jennings has been keeping himself busy by expanding his range of talents during the off-season since he’s not one for drinking and clubbing.

“I’m a true autodidact at heart,” He said after being released by the Giants, “I love to learn, I’m attracted to it. I pick up a new craft every off-season just to expand my mind. Whether it’s archery, poetry, learning how to make sushi. I do it all. I picked up fencing this off-season. It’s part of my personality. I love what I do. But I like life just as much.”

Along with his expanding list of talents, Jennings can add DWTS to his resumé. This season’s cast was announced a few days before his NFL free agency began and, while most players would focus on getting signed to a team, Jennings joined a reality competition. Nevertheless, Jennings believes dancing will improve his game, “Football is my passion, I train every single day. I train all morning and dance all night. This is going to add more flavor to my game. I’m excited for this year!”

#2. Showdown of the Fiancés

This season features two pro-couples competing against each other. Peta Murgatroyd is hoping to win her third season with Bachelor alum, Nick Viall. Meanwhile, her fiancé, Maksim Chmerkovskiy is hoping to even the score with a second DWTS win, and he’s going to use his partner, Heather Morris’ professional dancing background to his advantage.

Emma Slater dated fellow pro, Sasha Farber for a few years (though had a brief breakup before rekindling their relationship). Last season, Farber proposed to Slater on the show and she said yes. Even Nick Viall will probably agree that it was the sweetest televised proposal ever!

With not one but two pro-dancer couples this season, the level of competitiveness is surely higher. “I’m one half of two pairs of engaged couples. I think among the four of us, there are plenty of competitive vibes,” Slater said during the cast announcement on Good Morning America. But no matter what, she said her relationship will always come before the competition. As for Jennings, he approves, “I love to hear that. I’m a fan of love, so to hear that is exciting.”

Rashad Jennings, Simone Biles, and former figure skater, Nancy Kerrigan have the best odds to win Dancing with the Stars season 24. That’s saying something considering Glee’s Heather Morris and Fifth Harmony’s Normani Kordei are also competing. However, the athletes have always been favorites in DWTS.

A total of nine athletes have won the Mirrorball Trophy of which, five were Olympians. One of them was Biles’ teammate from the 2016 Olympics and season 23 winner, Laurie Hernandez. Jennings is second to Biles, but he has a secret weapon to win the competition: Emmitt Smith.

The former NFL player competed on season 3 with DWTS alum, Cheryl Burke and won. Smith was also praised by judges for bringing his charm to his dancing. It makes sense for Jennings to seek Smith’s advice, “He said go have fun!” Jennings said. “Look, I’m not claiming to be the best dancer ever … I’m going to have fun!” A Cowboy giving advice to a Giant? That’s novel!

Jennings and Slater take on the Cha-Cha to Bruno Mars’ “24K Magic” for their first performance. Don’t miss the premiere of Dancing with the Stars season 24, tonight on ABC at 8:00 p.m. EST.