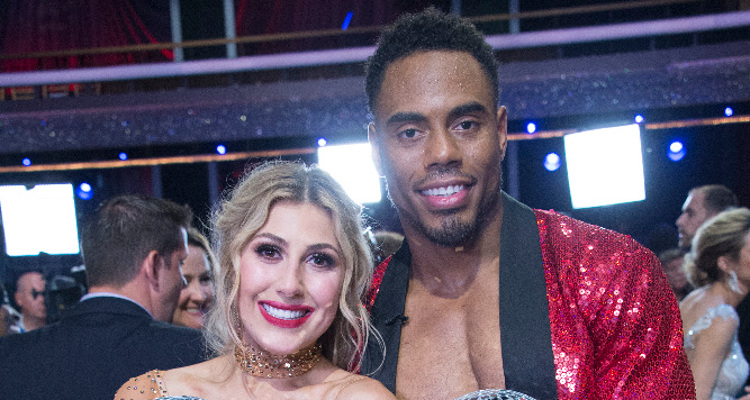 NFL free agent, Rashad Jennings hasn’t won anything in his football career. But he did have a massive win in the ballroom when he and his partner, Emma Slater won Dancing with the Stars. We’re sure his parents couldn’t be happier for their son!

#1. He Gets His Football Skills from His Father

Rashad Jennings comes from Virginia where he was raised by his father, Albert and his mother, Deborah. As a child, Rashad was a self-described “270 lb. chubby kid with asthma and glasses” —not the type of kid you’d see play football. But his motivation to play came from his father.

Albert Jennings was a former football player whose skills had him scouted by college football teams. He had earned a scholarship to the University of Nebraska, but turned it down to join the U.S. Air Force.

All else being equal, maturity comes with age. The older I get the more I understand the sacrifices my father made for our family. Happy Father's Day Pops.

#2. Albert is a Double Amputee

Albert Jennings suffered from diabetes and as a result, had to have both his legs amputated. It was hard for the family, but Rashad didn’t let it stop his motivation. His every achievement was dedicated to his father. Rashad started as a freshman player in Pittsburgh when his father’s right leg was amputated. He left school and enrolled at Liberty University because it was 10 minutes away from home.

Since Albert and Deborah had taken care of him for 19 years, Rashad felt that it was his time to take care of them. It was a risky decision to move to a smaller football program, but it paid off when he was chosen by the Jacksonville Jaguars in 2009 NFL draft.

When the New York Giants were going to face off against the Houston Texans, Rashad called his father before the game and told him, “I’m playing this one for you.” That game, Jennings had 176 yards on 34 carries with a touchdown, the most for a Giants running back in two years. “Today I was just reminded that my father has diabetes and he ended up getting both of his legs amputated. He doesn’t have legs. Today, I remembered that I do have them,” he said before the game.

#3. He Dedicated His DWTS Performance to His Father

During the Most Memorable Year week, Rashad requested to perform his routine to Katy Perry’s “Unconditionally.” He dedicated his performance to his father. Albert and Rashad’s relationship faced some hurdles as the Air Force retiree was a chronic alcoholic and smoker, which affected Rashad’s asthma.

When 13-year-old Rashad told his father to stop, Albert asked what he wanted to be when he grew up. Rashad replied that he wanted to play in the NFL and Albert said, “Do you think you’ll honestly be able to make it to the NFL without drinking and smoking yourself?”

“I remember looking at my dad and telling him, ‘Just to prove you wrong, I’m never going to do it.’ That’s why I’m 32 today and I’ve never drank alcohol a day in my life and I’ve never smoked a day in my life. And that was just to prove him wrong.” Rashad said in the clip before his performance, adding that watching him pursue his dreams made his father quit drinking and smoking, himself.

Thank God for you @Beckilu71 and @LibertyUniversity for flying my dad out to the show! I'll never forget your most kind gesture.

Rashad is the youngest of three boys. His brothers, Butch and Bryan, are also great football players. The older Jennings’ brothers played in the NFL and Rashad said they were his favorite players growing up. Bryan is now the head football coach at Huguenot High School in their hometown. Butch is also a football coach.

College scouts were interested in Jennings but his low GPA proved to be a problem. To improve his grades, he transferred to a private school. The family couldn’t afford the tuition, so Rashad’s brothers stepped in. “My brothers and me, we all decided it would be best for me to transfer and get another opportunity going to a private school. I ended up repeating my junior year. We didn’t have money at the time for it, so both of my brothers made an investment in me and they coached at the Lynchburg Christian Academy for free to pay for my tuition to be at that high school. The rest is kind of history,” he said.

These days, Butch and Bryan love to give their baby brother grief over his glittery ballroom outfits!

There’s no record of Rashad dating anyone at the moment. He was romantically linked to MTV star, Angela Simmons, but she’s currently engaged to Sutton Tennyson and they have a son together. So, there’s definitely nothing going on between her and Rashad! It looks like the former Giant is very much single.

As for his partner, Emma Slater, she is engaged to another DWTS pro, Sasha Farber. They were an on-again off-again couple before they got back together for good and Sasha proposed to her on live television, during season 23!

I would never have dreamed I would be a star on @DancingABC much less win the Mirror Ball! @TheEmmaSlater I am SO your biggest fan! Proud to witness you win and to be your partner in it all!!!! #TeamShadSquad #DWTS