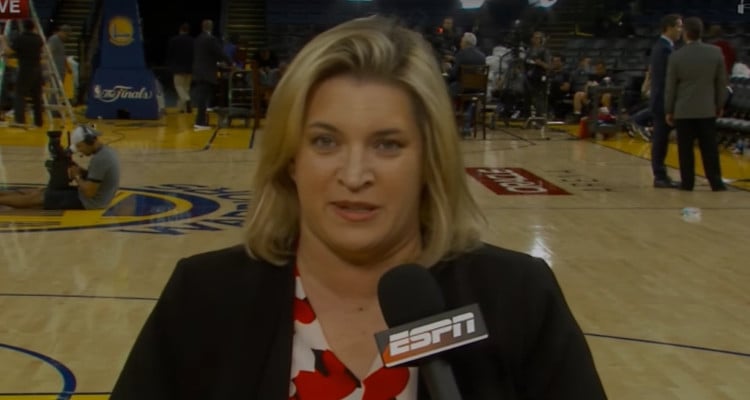 ESPN is the premiere source for all sports updates. Its contributors, like Ramona Shelburne, have the best insights regarding all sport-related news, especially when it comes to the NBA.

When you need to get yourself up to speed about the latest in the world of sports, you can always count on Ramona Shelburne. She has all the latest sports news about everything you need to know, including the recent much-talked about appointments of Magic Johnson and Rob Pelinka in executive positions for the Los Angeles Lakers. Shelburne is also one the most popular sports analysts on ESPN. Find out more about this professional sports enthusiast, right here in Ramona Shelburne’s wiki.

ESPN’s Insider for all Things NBA

According to her LinkedIn profile, Shelburne has been a sports columnist for almost 16 years. She first worked for the Los Angeles Daily News from 2002 to 2009, before moving to ESPN as a correspondent. She not only covers the NBA for ESPN.com, but also contributes to ESPN the Magazine, ESPN Radio, ESPN W, and SportsCenter.

She is also a member of ESPN’s premiere long-form and investigative unit across multiple platforms. She reports and analyses for the network’s shows like The Jump around the Horn, Pardon the Interruption, Outside the Lines, SportsNation, NBA Tonight, and NBA Coast to Coast.

Also Read: Katy Tur Wiki: Everything You Need to Know about The NBC News Reporter Taunted by Donald Trump

An Over-Achiever in Sports

Ramona Shelburne’s expertise in the professional basketball field has been recognized by several Pro Basketball Writers Associations for awards in column writing and breaking news. Her work has also been featured in Sports Illustrated, Stanford Magazine, and Sports Illustrated for Women.

Not much is known about her early life, except that she studied at Stanford University. She graduated with a master’s degree in Communication and a bachelor’s degree in American Studies. She played softball during her time at Stanford and was a three-time Academic All-American athlete. Shelburne was part of the first Stanford team to make the NCAA tournament in 1998, and the Women’s College World Series in 2001. Her fellow Stanford student and teammate was Jessica Mendoza, another ESPN analyst who covers baseball.

Her Husband is a Foodie

Shelburne is married to Nevin Barich, a former sports journalist. Barich graduated from California State University-Northridge with a degree in Broadcast Journalism. In 2001, he received the prestigious Allan Malamud Scholarship, a reward given to the top collegiate Jewish sportswriter in California every year.

My husband has joined a boy band pic.twitter.com/fhxFf4ld

Barich was a sports writer and copy editor for Los Angeles Daily News from 1996 to 2003. He was a freelancer for the publication for two years before he became an official member of the staff. He was the youngest editorial member in the newspaper’s history. Among the many sports events he covered for Daily News was his coverage of the 2000 Summer Olympics in Sydney, Australia.

After leaving the Daily News, Barich was employed as a senior editor for the LA-based trade magazine, The National Notary, from 2003 to 2007. There, he oversaw the magazine’s editorial web content, which covered topics ranging from identity theft, mortgage fraud, the real estate market, and notarization. In the four years that he worked there, Barich raised the magazine’s circulation rate by 67%.

Also Read: Sunlen Serfaty Wiki: Here’s What You Need to Know about the CNN Correspondent

From 2007 to present, Nevin Barich switched from writing about sports to writing about food. He’s now a Food and Beverage Analyst for the marketing firm, Industry Intelligence Inc., and he also runs his own food blog. His blog covers the latest food trends and he’s become something of an insider to fast food chains. Barich is also a contributor to the Huffington Post Taste.

Naked Chicken Chalupa going away but @tacobell is hard at work on on the next big thing. My blog for @IndustryIntel https://t.co/o3IU6QbDIq pic.twitter.com/z5TA11rcso

She Came Under Fire for Her Super Bowl Tweet

During the nail-biting 2017 Super Bowl game, when the New England Patriots won over the Atlanta Falcons in a surprising turnaround, Ramona Shelburne faced backlash for a tweet she posted. The Falcons were in the lead before halftime when Shelburne posted the tweet, taking a jab at President Donald Trump’s  friendship with Patriots’ quarterback, Tom Brady.

Shelburne’s tweet upset the “stick to sports” type of fans who don’t like politics entering the Super Bowl, which was controversial enough with the Patriots’ deflategate scandal. Nevertheless, Shelburne turned a deaf ear to the criticism.