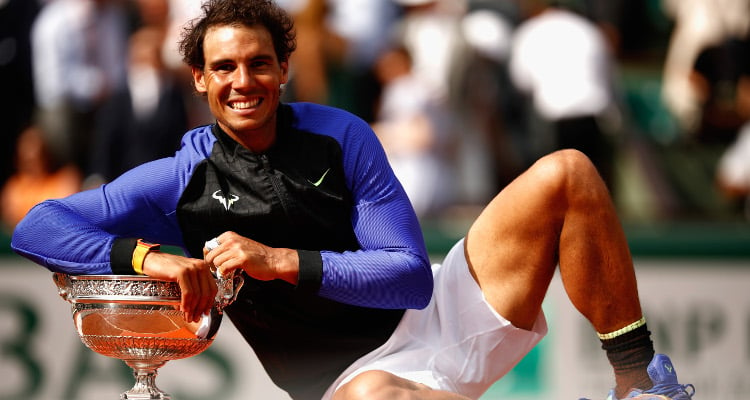 The world No.1 in tennis, Rafael Nadal, is looking to end the U.S. Open in style. With a semifinal match against Juan Martin Del Potro coming up, we are surely in for an exciting game! But just how rich is Rafael Nadal? He is making money as we speak, so Rafael Nadal’s net worth of a staggering $160.0 million is sure to grow. Read more to learn about Nadal’s personal and career highlights!

Rafael Nadal is undoubtedly a great tennis player, but just how great are his earnings? If you are a fan of the ace, then you need to read on to know more about Rafael Nadal’s house, net worth, stats, and ethnicity.

Rafael Nadal is a tennis pro, and is currently ranked as the world’s No.1. He was born in Manacor, Mallorca, Spain on June 3, 1986, making Rafael Nadal’s age 31. His family owned restaurants, and insurance companies along with a glass and window company. His family consists of his father Sabastian Nadal, mother Ana Maria Parera, and a younger sister Maria Isabel.

His uncle, Miguel Angel Nadal, was a soccer player, and he taught Nadal how to play soccer. He quickly became a fan of the sport and still supports Real Madrid and RCD Mallorca.

It was Toni Nadal (another uncle) who recognized Nadal’s tennis talent and introduced him to the sport. When Nadal was eight, he won the Under-12 regional tennis championship, and after seeing what his nephew could do, Toni began training him more intensely. He even taught Nadal how to play left-handed so he would have an advantage on the court.

Nadal was 12 years old when he surprised crowds by winning both the Spanish and European titles in his age group. Since he also played soccer at the time, his father wanted him to focus on one sport so that his education wouldn’t suffer.

In 2000, the Spanish tennis federation asked Nadal to move from Mallorca to Barcelona for training, but his family was against the deal. Because he decided to stay home, Nadal received less financial aid from the federation. Sebastian Nadal agreed to cover the costs, and told his son that he could do great things from his hometown. In 2001, at a clay-court exhibition match, Rafael Nadal defeated Grand Slam champion Pat Cash.

Rafael Nadal was 15 years old when he turned pro in tennis, and the rest is history. He is the current world champion, and Nadal’s stats say it all! From being No. 762 as a teenager, to beating out the competition, Nadal has had more wins than losses, and he worked hard for each one. He debuted at Wimbledon in 2003, and saw more success there, becoming the youngest player since Boris Becker to have reached the third round.

In 2004, Nadal played the Australian Open and lost to Lleyton Hewitt. Later that year, he faced world No.1 Roger Federer, and won in straight sets. He was proving his mettle and was soaring up the ranks.

His then faced and beat Andy Roddick, who was world No. 2 at the time, at the Davis Cup in 2004. Nadal was the youngest player in history to be registered in a singles win at the Davis Cup, and brought Spain a win over the U.S.

In 2005, Rafael Nadal looked like a king searching for places to conquer. When he played in the spring clay-court session, he had 24 consecutive wins, beating the record previously set by Andre Agassi, in the Open Era. All while he was still a teenager! He had another win at the Torneo Conde de Godó in Barcelona, The Monte-Carlo Masters, and the 2005 Rome Masters.

The French Open 2005 was next, and Nadal’s wins were not slowing down. On his 19th birthday, he beat Roger Federer in France, and later defeated Mariano Puerta in the finals, setting yet another record by becoming the second player to win the French Open on his first attempt. This ranked him at No. 3, but there was a hiccup in his glorious winning streak.

#Repost @rafanadalacademy ・・・ Congrats to @rafaelnadal on today’s victory and all the best for tomorrow! #Vamos #ChinaOpen

Nadal lost the 2005 Wimbledon to Alexander Waske and Gilles Muller in Luxembourg at the Gerry Webber Open. But the champ could not be stopped for long! He won three consecutive tournaments, 16 consecutive matches, and became world No. 2.

After winning two French Open titles in 2006, and 2007, Rafael Nadal did his nation proud by winning a gold medal in the 2008 Beijing Olympics, securing his world No.1 position, by defeating Novak Djokovic in the semifinals.

Over next few years, Nadal zoomed through French Opens, and with a few losses, shuffled between the No.2 and No.1 positions. His biggest rivals became Roger Federer, Novak Djokovic, Andy Murray, and Stan Wawrinka. Nadal proved more than once that he is the one to watch out for!

Rafael Nadal’s Net Worth and Endorsements

Nadal has been concentrating on his aggressive and surprise-attack-like game plan. Since he has amazing speed on the court, he is a really good opponent. He usually uses a forehand stroke form, which allowed him to play a topspin better than anyone else.

Rafael Nadal is sponsored by Nike, Tommy Hilfiger, and Kia Motors majorly. He was also the face of many luxury brands like Lanvin, Emporio Armani, and Armani Jeans. He is also the international ambassador for a baked goods company from his hometown, Quely, whose snacks he loved since childhood.

Nadal is one of the world’s highest earning athletes with a massive net worth of $160.0 million, and earnings soaring as high as $37.5 million. The tennis player became very rich very quickly, and deserves every cent of that money. Here’s a break down of Rafael Nadal’s fortune: