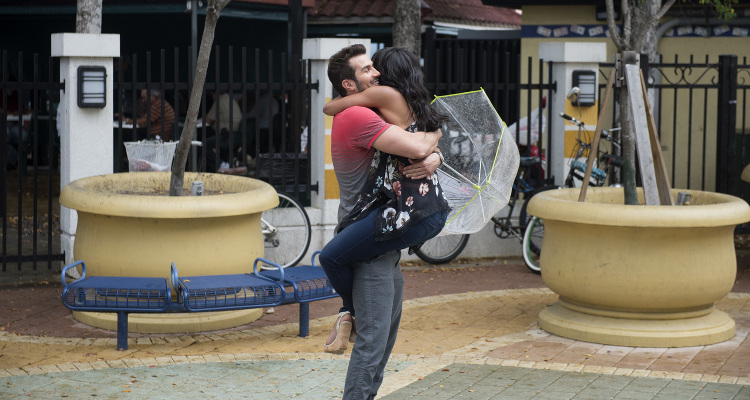 Everybody knows that filming for The Bachelorette ends weeks, sometimes even months, before the episodes air. That means that when the couple are engaged after the finale, they have to keep their relationship under wraps until ABC airs the episode. The Bachelorette 2017 finale aired on August 7, 2017. If you did not know, Bryan Abasolo and Rachel Lindsay got engaged! But, are Rachel Lindsay and Bryan Abasolo still together?

It is hard for a couple to keep their relationship hidden, especially when their love story is being followed by millions of people. Season 13 of The Bachelorette followed 31-year-old lawyer, Rachel Lindsay in her second quest for love on the franchise. Bryan Abasolo, The Bachelorette’s winner, is the doctor who now doubles as her fiancé. Filming for the show ended a while ago, and the new couple had to keep their relationship a secret.

Now that The Bachelorette 2017 finale aired, they can be open about their relationship and stop with the secret dates. They can now freely post photos together on social media and be seen together in public. Bryan Abasolo and Rachel Lindsay are officially engaged, and sources say they are still happily in love!

Talking about her relationship, Lindsay said, “I don’t even know what my ring looks like anymore.” She further added, “I’m ready to have my fiancé by my side. There are so many things I get to do and he’s not with me, and I’m like, ‘Oh my gosh, he would love this so much.’ We’re just ready to be normal and be with each other.”

This definitely proves that their relationship is still going strong. Back in May, Lindsay revealed that the guy she chose is her “forever love” and she is now with the love of her life.

“I like to treat my man, but never have I treated my man like I’m going to treat a man today.” –Rachel ???? #TheBachelorette

During the season finale of The Bachelorette, Abasolo proposed to Lindsay with a beautiful Spanish backdrop, and she could not have been happier with her decision. With a comment about giving him her first and final roses, viewers could see that Abasolo was the right man for her. With Rachel Lindsay revealing that she wants to get married in 2018, it looks like we might see her walk down the aisle with Bryan Abasolo sooner than most Bachelor couples! Despite the challenges and hurdles they faced, they are moving forward and are excited about planning their wedding. Talking about getting married Lindsay said that  they are thrilled, but still “going to get to know each other at the same time. It’s not happening this year. Maybe next year.”