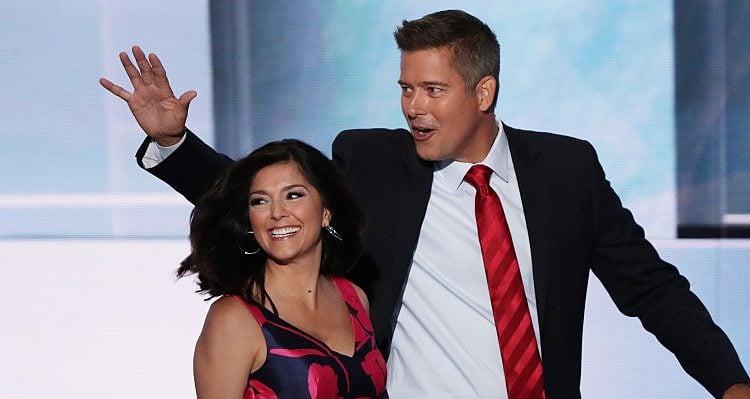 Rachel Campos was raised in a strict Catholic home, and she attributes her rebellious streak to it. Campos found fame first on the MTV reality television show, The Real World: San Francisco. She married Sean Duffy and is now the proud mother of their six kids. The lady is bold and has an independent opinion about all that goes on in America. Keep reading to know more about her in our Rachel Campos wiki.

Even though Rachel Campos does not make controversial statements, she usually does have an opinion about everything that goes on in America. Like the time when a Massachusetts elementary school decided to cancel its Halloween parade, saying that it is not inclusive of all students.

Campos said, “Liberals, they take the fun out of everything, scouting, Halloween, Christmas, football.”

Rachel Campos-Duffy is an American television personality who first became famous as a cast member of the MTV reality television series, The Real World: San Francisco in 1994. She later became a TV host and was most notable as the recurring guest host on the ABC talk show, The View.

In 2016, Campos was ranked as one of Newsmax’s 50 Most Influential Latino Republicans.

Who Is Rachel Campos?

Born on October 22, 1971, in Tempe, Arizona, to her parents Maria del Pilar and Miguel Campos, Rachel Campos-Duffy’s age is 46. Campos has two brothers and a sister, and she was raised in a strict Catholic home.

Campos graduated from Arizona State University with a degree in Economics in December 1993 and was awarded the Woodrow Wilson Graduate Fellowship. Initially, Campos wanted to be a college professor, but things turned out differently for her.

What an honor to speak to 300 #YAF college students in Nashville who are NOT feeling the Bern! They know socialism & liberals in charge = Cuba, Venezuela, Greece, Detroit, Puerto Rico & dependency on government. #FreeMarkets #liberty #LimitedGovernment #AmericanDream

The Arizona native found herself on the set of The Real World: San Francisco. It was a controversial program and not easy to take part in, but Campos had the guts to do so. In the show, she was depicted as a passionate Republican whose heroes included Jack Kemp and whose strict religious upbringing gave her a rebellious streak, which would result in clashing with her parents often.

Contributing to Her Community

Rachel Campos later appeared on the show, Road Rules: All Stars, which also starred the alumni of other past Real World seasons, like Sean Duffy of Real World: Boston. Campos then went back to college and earned a Masters in International Affairs from the University of California in San Diego.

In the car & heading to Washington DC today for her first internship serving the constituents of South Carolina in Rep. Trey Gowdy's office. ??

Campos repeatedly tried to get the position as a host of The View but was rejected three times before finally clinching the spot. She was also one of the 10 Real World alumni who acted in the 2003 film, The Wedding Video, which was a Real World parody that focused on the wedding of first season cast member, Norman Korpi.

The TV host has been contributing to her Latin community through an organization called the LIBRE initiative, which tries to help workers and entrepreneurs by providing economic education and promoting free-market policies.

There is no information on Rachel Campos’ net worth but considering her active career on TV, it must be substantial.

While working hard on her career and for her community, Campos has been very busy in her family life as well. Rachel Campos’ husband is Sean Duffy, whom she met during the Real World years. The couple got married on April 4, 1999.

Campos loves children, and it’s no surprise that she has six of her own. Unfortunately, she suffered two miscarriages as well.

Rachel Campos’ children now live in Wausau, Wisconsin, with their parents so that Sean Duffy can conveniently to go to the airport three or four days a week to commute to Washington D.C.

With an understanding husband, a truckload of lovable children, and a sharp intellect, Rachel Campos seems as though she is a very happy woman right now.