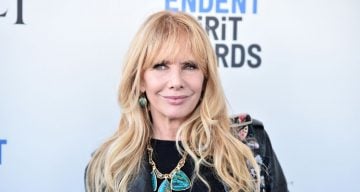 Rosanna Arquette spoke up about being sexually harassed by film producer Harvey Weinstein in the ’90s, when she met him to pick up a script. Arquette appeared in many TV shows and films, and carved out an impressive career in Hollywood. Though her net worth is a modest $9.0 million, she would rather do meaningful roles than take run-of-the-mill parts.

More women in Hollywood, including Judith Godrèche, Gwyneth Paltrow, and Angelina Jolie have spoken out about being sexually harassed by Oscar-winning producer, Harvey Weinstein. Another actress who came forward with her experience while still finding her footing in Hollywood is Rosanna Arquette. Harvey Weinstein and the actress met in the early 1990s, and she alleges that he asked her to meet him at the famous Beverly Hills Hotel to pick up a script. Here are a few details from Rosanna Arquette’s wiki.

What Did Harvey Weinstein Do?

Arquette revealed that when she reached the reception of the hotel, she was told to go to Weinstein’s room, which she found odd. Weinstein greeted her in a white bathrobe, and asked her for a massage to help with his back pain. Arquette suggested that he call a professional masseuse, but says that Weinstein grabbed her hand and pulled it toward his crotch. Shocked, she immediately withdrew her hand, as Weinstein boasted about the famous actresses he supposedly slept with. He then said, “Rosanna, you’re making a big mistake” but Arquette was already heading out the door and replied, “I’m not that girl. I will never be that girl.” She did not get that part, and a representative for Weinstein indicated that he never produced that movie. Even though Arquette later had a role in Weinstein’s cult classic Pulp Fiction, she says she avoided the producer.

Born on August 10, 1959, in New York City, to Brenda Nowak and Lewis Arquette, Rosanna Arquette’s age is 58. Nearly every member of her family is associated with the arts, including her actor siblings Patricia, the late Alexis, David, and Richmond. Arquette has had a successful career in film, but started her career with roles on TV. She was noticed for her part in the TV  movie The Executioner’s Song in 1982, for which she earned an Emmy nomination. She then appeared in several notable films like Baby It’s You, Desperately Seeking Susan, Silverado, After Hours, and 8 Million Ways to Die. Deciding to branch out of Hollywood for a bit, Arquette worked in Europe, doing films like Luc Besson’s The Big Blue in 1988.

Read Tracy Tynan's wonderful memoir the threads of my life.

She then acted in a few critically acclaimed films, like Martin Scorsese’s New York Stories, Pulp Fiction, Crash, and the Australian film, Wendy Cracked a Walnut. Arquette wore a director’s hat for the documentaries, Searching for Debra Winger and All We Are Saying. Other movies that she acted in include: Nowhere to Run, Hope Floats, Hell’s Kitchen, The Whole Nine Yards, Kids in America, Kill Your Friends, and Lovesong. In 2018, she has two upcoming movies: The Velvet Gentleman and For the Love of George, both of which are currently in post-production.

Thanks to her steady work over the years, Rosanna Arquette’s net worth is a modest $9.0 million.

I'm visiting my baby in london and she got me a big rose from the 40s for Mother's Day!

Arquette married her fourth husband, investment banker Todd Morgan, in August 2013, after a two-year engagement. She was previously married to director Tony Greco, film composer James Newton Howard, and restaurateur John Sidel but all three ended in divorce. Her only child, Zoe Bleu, is Sidel’s daughter. Rosanna Arquette’s Instagram account has pictures of her family, friends, and co-stars. She traveled to countries like Israel, and they are well-documented on her page. There are quotes, as well as pictures of religious figures and places. It is clear that she is an adventurer who likes to know more about other cultures while constantly challenging herself to push beyond her limits.