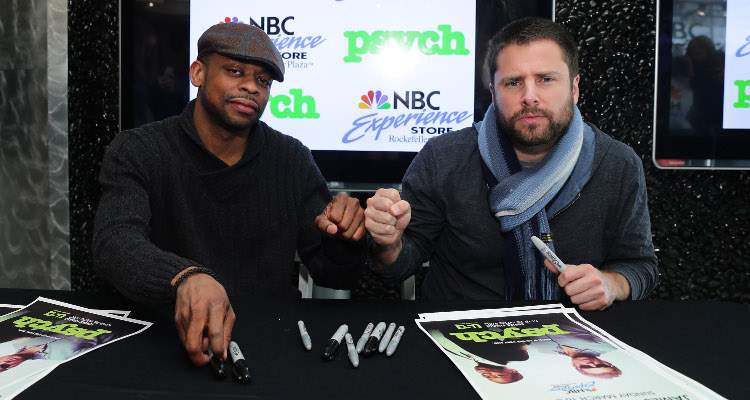 Psychos unite! December is here and making it even better is the long awaited revival of Psych. If you have been waiting for Shawn and Gus, worry no more. It’s time to watch Psych: The Movie.

If you’re looking for the perfect show on TV for some winter entertainment, nothing can be better than Psych. The long-running comedy series with the perfected formula for laughter is back this holiday. Psych: The Movie brings the whole gang together for the holly jolly goodness we missed. What time and channel does Psych: The Movie come on? Just so you don’t miss the awesomeness of Shawn and Gus, we’ve got everything you need to know about the release date of Psych: The Movie.

Where to Watch Psych: The Movie?

In May, the USA Network revealed plans to revive their hit show, Psych in a movie which will be released this December. Psych: The Movie will premier on Thursday, December 7 on the USA Network. Psychos, get the popcorn ready for 8:00 p.m. EST!

Our favorite team of detectives and fake psychics reunited for Psych: The Movie to bring back pop culture obsessiveness and some observation skills that will make Sherlock hide in shame. James Roday and Dulé Hill (as Shawn and Gus) are getting into some pineapple-spiced latte flavored antics this time around.

The screenplay has been written by James Roday while series creator, Steve Franks directed the movie. Timothy Omundson, Maggie Lawson, Kirsten Nelson, and Corbin Bernsen are reprising their roles as the good ol’ detectives who can’t save the day without Shawn.

Ralph Macchio, who was on the show for season 5, returns as Nick Conforth. Ballers actress, Jazmyn Simon, who is engaged to Hill in real life, is the new addition to the cast as Gus’ love interest. And as if the movie wasn’t awesome enough already, Zachery Levi plays ‘Thin White Duke,’ the big baddie of the movie. It almost made us forget that John Cena is on the show, too!

Are you ready to be covered in holly and jolly goodness? #PsychTheMovie premieres TOMORROW at 8/7c, so start brewing those pineapple spiced lattes! ?☕️ pic.twitter.com/BeU2sYPyNc

The show ran for eight seasons, ending in 2014 and it’s still the same. And why would they change? It was the perfect route for the escapism we need in these dark times. With the population of Psychos increasing, thanks to the show finding a second home on online streaming sites, Psych: The Movie couldn’t have come at a better time.

This time, the crew has taken a three-year leap. Fake psychic detective Shawn and Gus, his wisecracking version of Watson, have opened their new office. Shawn names their business ‘psychphrancisco’ (because, what else?).

As they go about solving cases like they usually do, making us laugh until our bellies ache, a mystery assailant attacks one of their own. So, the Psych team comes to pursue the unknown villain (presumably Levi), seek justice, and most importantly, feast on some delicious food!

And if you’re still craving for more after tonight’s Psych-otic hilariousness, Steve Franks is your genie in a bottle. The creator has struck inspiration from the never-ending Fast and Furious franchise and is planning five more movies in the Psych series.

“[In the same] way that the Fast and the Furious movies used to be about street-racing and they’ve pivoted into heist movies and all that stuff, I kind of want the [Psych] movies to pivot into action-comedy where you can do something that feels like a feature movie and not just two episodes of Psych put together,” said Franks. “Because as fun as it is to watch this show, it’s nothing compared to how fun it is to write this show and to make this movie,” he added.

And he’s already getting there. He hinted that work has already started on the second movie. There’s no word on future movies of the franchise yet. But hey! If these guys want to make a Psych movie franchise longer than Fast and Furious, we’re definitely not protesting that.

The biggest pop culture event for millennials aka Psych: The Movie premieres tonight at 8:00 p.m. EST on the USA network. Get pumped for the epicness with the trailer below!