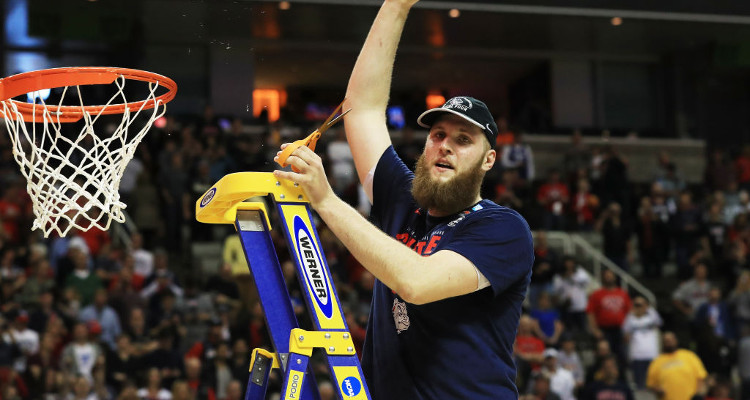 Przemek Karnowski is one of the star players for the Gonzaga Bulldogs men’s basketball team. With his talent, dedication, and moves on the court, Karnowski is a player to watch out for.

Przemek Karnowski’s age is just 23, but he has already earned a name for himself in basketball. Karnowski is a Polish college basketball player, who currently plays for the Gonzaga Bulldogs as a center and has a lot of potential to further his career. Other than college basketball, Karnowski has also played for the Polish national team. After Gonzaga’s 83-59 win over the Xavier Musketeers last night (March 28), we are sure you want to know more about this up-and-coming basketball player. So, we have some details from Przemek Karnowski’s wiki, right here!

They said we couldn't make it…

Przemek Karnowski was born on November 8, 1993 in Bydgoszcz, Poland. After seeing him tower over most of his teammates and other players, a lot of people wonder about Karnowski’s height. He stands tall at 7’1” and weighs around 300 pounds! He graduated from Nicolaus Copernicus High School, in Tarnobrzeg, Poland. Currently, he is studying at Gonzaga University in the United States.

While watching a game, you can easily spot Karnowski thanks to his on-point beard —something the star center is proud of. During an interview, he said, “I really didn’t like shaving so I just went with the beard and I let it grow,’’ he said. “My mom hates it. My dad doesn’t really care. My mom is like, ‘You’ve got to go shave it.”

However, when his parents flew down to Spokane to support their son during Senior Night, they were astonished to see fans wearing fake beards in honor of the one Karnowski sports. At least, for now, his mother will stop asking him to shave! Karnowski plans on shaving his beard after the season, but plans on growing it back soon.

Playing basketball comes easy for this guy, after all, he is very tall and extremely talented. He started his freshman year at Gonzaga University in 2012, the same year he joined their basketball team.

During the 2013-2014 season, Karnowski’s stats averaged 10.4 points, 7.0 rebounds and 1.7 blocks as the Bulldogs’ starting center. During his senior year, he could only play five games due to back problems, and averaged 8.8 points and 5.4 rebounds.

Great seeing lil bro tear it up in the win today! #FlexBros #europeanconncetion

For his back pain, Karnowski had to undergo surgery, after which he developed an infection and lost almost 60 pounds. Karnowski was told that he wouldn’t be able to perform any strenuous activity for 10 months post operation. However, he started running after seven months. To protect his back, the Gonzaga training staff have him on a customized training schedule, which prevents him from participating in basketball-related activities outside of games and practices.

His Return to College Basketball

Two wins in Denver and off to Chicago we go! Ready to try some Polish food in Windy City! #marchmadness #ncaatournament #NothingHeavy #karnowski

During Karnowski’s senior season, he was nominated for the Kareem Abdul-Jabbar Award and Senior CLASS Award. He graduated with a Bachelors of Education in Sport Management and MBA with one of the top GPAs in WCC. Due to this, he was named to the 2016-17 WCC Men’s Basketball All-Academic Team.

If you take a look at Przemek Karnowski’s Instagram account, then you can see that the 23-year-old player truly has a passion for basketball. At only 23, Karnowski has already accomplished a lot and has paved the way for a possible pro career in basketball. This was all possible due to his hard work and dedication to the sport.