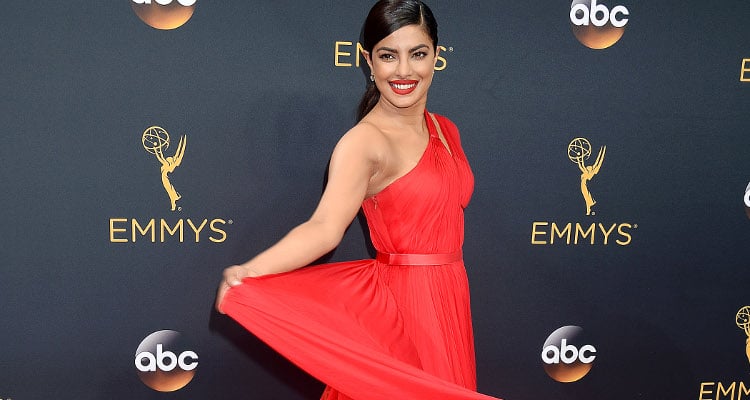 In the latest news, Bollywood actress turned Hollywood star, Priyanka Chopra is making headlines for her 68th Emmy Awards appearance, where she wore a gorgeous red gown, accentuated by red lipstick. The Quantico star turned many heads with her flawless look, and left Emmy viewers wondering about Priyanka Chopra’s wiki, age, and boyfriend. Don’t go anywhere else because we’ll tell you everything you need to know about Priyanka Chopra’s net worth and dating life.

Priyanka Chopra is a well-known Indian actress, singer and former Miss World 2000. Today, the 34-year-old is said to be one of the highest paid actresses in India, and is celebrated for her unique style. She may have acquired celebrity status now, but she came from an ordinary family and had a modest upbringing. Chopra was born on July 18, 1982, in Bihar, India to army physicians Ashok and Madhu Chopra. She has a younger brother and spent her childhood traveling all around India due to her parents’ military designation.

At the age of 13, Chopra moved to the United States where she attended school, and stayed with her aunt for three years. Later, Chopra relocated to India to complete her education, when she won her first beauty contest, the local May Queen beauty pageant. Since then, there has been no looking back for the stunning beauty.

Upon her mother’s insistence, Chopra entered the Femina Miss India contest, and before she could fathom the enormity of the prestigious title, the 18-year-old effortlessly won the pageant! Subsequently, Chopra was crowned Miss World 2000 and Miss World Continental Queen of Beauty, Asia and Oceania.

Although she enrolled in college, the newly crowned Miss World was flooded with film offers, and dropped out to make her debut in 2002. In a career spanning over 15 years, Chopra has acted in over 50 Bollywood films, including regional language films like Tamil. Her portrayal of a model in the 2008 Bollywood flick titled Fashion won her the National Film Award for Best Actress. Recently, Chopra was seen in blockbuster movies like Bajirao Mastani and Dil Dhadakne Do, which set the box office registers ringing.

Besides her acting career, Chopra also tried her hand at singing and released singles like, “In My City (featuring Will.i.am),” and “Exotic (featuring Pitbull),” which were well-received in both India and abroad. After her successful stint in the Indian film industry, Chopra set her sights on Hollywood and made her debut as the leading lady in ABC’s hit show, Quantico. She will also be seen on the silver screen revival of the hit ‘90s show, Baywatch in 2017.

Chopra has achieved tremendous fame and success at a young age. Naturally, her fans are interested in knowing about her boyfriends and dating life. Well, sorry to disappoint you folks, but Chopra is fiercely private about her personal life. She has been linked to many Bollywood actors in the past like Shahrukh Khan, Akshay Kumar, and Shahid Kapoor but none of her relationships have been publicly acknowledged. She has never been married and remains stubbornly single as she continues to conquer Hollywood.

Salt in the air, sand in my hair ???? @instylemagazine #InStyle #InStyleAugust #CoverGirl @fendi

Priyanka Chopra or “Piggy Chops” as she is fondly called by fans, has won several awards and accolades in her extensive career. As of 2016, her net worth is estimated to be around $10 million.

Juggling her acting, singing, and modeling career, Chopra has won five Filmfare awards and the Padma Shri, the fourth-highest civilian award. Time magazine has named Priyanka Chopra as one of the 100 most influential people in the world. Described as a self-made woman, her earnings come mainly from her movies and her TV show, Quantico. She also has numerous brand endorsements such as TAG Heuer, Pepsi, Nokia, Garnier, Nestle, and Hero Honda. It looks like there is just no stopping this multi-talented powerhouse!