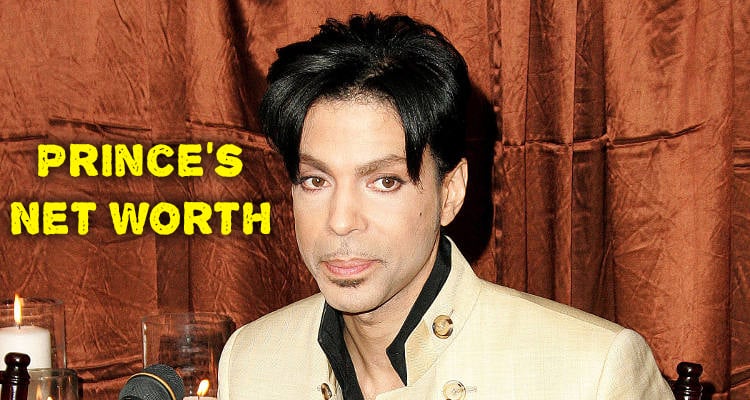 It’s still hard to believe that the music legend has suddenly departed, and all that’s left is Prince’s net worth of $250.0 million and his unforgettable legacy.

As of this very moment, the estimated Prince net worth is $250.0 million and sadly, it has taken a big halt due to the iconic singer’s sudden death. News of Prince’s death has shaken everyone as we all believe the legend had gone too soon. Celebrating his eternal legacy, people across the world are already tuning into their favorite Prince songs, reminiscing how Prince’s music has comforted them all the time.

How Did Prince Die?

Many people are still unaware of Prince’s untimely death, and those who’ve heard the news are finding it hard to believe. On April 21 (Yesterday), Prince was found dead at his Paisley Park complex in Minnesota. It’s been reported that on Thursday morning, Prince was found unresponsive in an elevator at his Minnesota recording studio. After going through an emergency CPR, Prince was pronounced dead at 10:07 am.

Prince’s age was 57 at the time of his death, and he had been suffering from some health issues for a while. Few weeks ago, it was reported that Prince had canceled his two performances in Georgia, which were a part of Prince’s 2016 tour “Piano & A Microphone Tour”. While flying back home to Minnesota the following day, Prince had to make an emergency landing for medical treatment. Prince’s rep revealed the singer suffering from dehydration and influenza. TMZ reported that Prince was treated at the hospital for a drug overdose and that he chose to leave the hospital against the doctor’s recommendation. As of now, details on the cause of Prince’s death haven’t been revealed by the county’s coroner.

The undue death of Prince has saddened every music lover in the world and the only healing for this is to celebrate his legendary life. Just like pop legends Michael Jackson and Elvis Presley, Prince was an innovating musician. His style of music revolutionized genres like funk and R&B and became a pioneer superstar of new wave music.

Prince is undoubtedly the key person who founded the Minneapolis sound and his songs effortlessly blended multiple genres like soul, pop, psychedelic and rock & roll. In fact, Prince was so brilliant at his art that he was immediately inducted into the Rock and Roll Hall of Fame as soon as he became eligible in 2004. Rolling Stones credited Prince the 27th spot on their exclusive list of the 100 Greatest Artists of All Time.

The New York Times describes Prince as “a master architect of funk, rock, R&B and pop”. Considering the changes in his musical style throughout his artistic career, Prince has been compared to jazz legend Miles Davis. Besides being a top-selling artist of all time, the Prince fashion and style has been admired for decades and has been the influence of many of today’s pop stars. Adding to his undying legacy in music, Prince is also termed as a sex symbol with an androgynous and amorphous persona that defies several racial and gender stereotypes.

How Rich Is Prince?

Born as Prince Rodgers Nelson in Minneapolis, Minnesota, young Prince began writing songs and making music at a very young age. As a 19-year-old budding musician and singer, Prince’s initial demo tapes weren’t successful. But, with his first debut studio album For You (1978), Prince began his journey to superstardom. And, with Prince (1979), his self-titled album, his hit R&B singles “Why You Wanna Treat Me So Bad?” and “I Wanna Be Your Lover” topped many Billboard charts that year.

So far, Prince’s 39 studio albums have collectively sold more than 100 million copies worldwide. Prince and his backup band, The Revolution, toured across North America and even went overseas to taste brilliant success. The Prince concert shows, tours and even live performances have always been a sold out hit. Prince’s current wealth is largely benefited from money earned exclusively through the Prince music, which is his legacy.

Prince’s affluent lifestyle and humble living found shelter in his $8.0 million dollars sprawling estate in Chanhassen, Minnesota. After leaving his home on Lake Riley, Prince rebuilds this property in 2005 and made it his home. Along with Prince’s mansion, “Prince’s Paisley Park Studios: and “Paisley Park Complex” has also been added to the estate. His famous recording studios, where all the magic was created, remain Prince’s last place as an alive person.

Prince’s last appearance was at Dakota Jazz Club in Twin Cities, Minnesota, where he attended singer Lizz Wright’s performance. Actor Will Smith shared a heartfelt message on his Facebook, saying “I just spoke with him last night. Today, Jada & I mourn with all of you the loss of a beautiful poet…” Celebrities from Hollywood and music industry across the world lamented Prince’s death on their social media.

This is so heartbreaking???? I had this Prince pic drawn on my wall years ago because his music inspired so many R.I.P???? $8.0 million

Saddened by Prince’s death. Proud to have seen in the New Year with him. He seemed fine and played brilliantly funky music.

Prince was one of the most unique and exciting artists of the last 30 years. 3/3