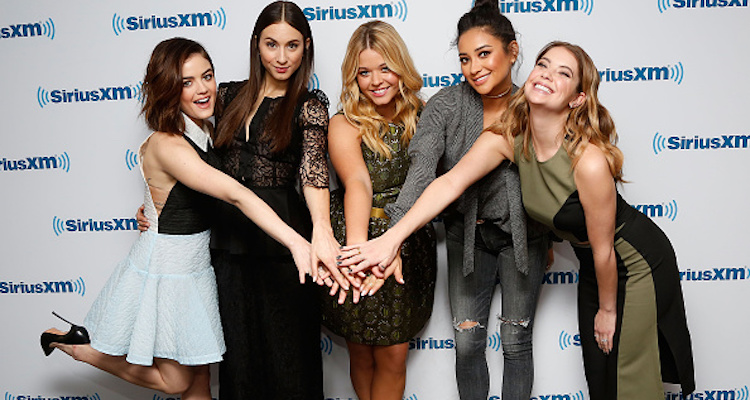 Is there going to be a spinoff of Pretty Little Liars? That’s what fans want to know, now that the show has finally wrapped after seven long seasons of wondering about the identity of “A” and “A.D.” Is there a possibility of a Pretty Little Liars sequel? Keep reading to find out! Warning; Spoilers ahead!

If you have been a fan of the show for its full seven seasons, then good for you! We know it couldn’t have been easy with all the soap opera twists and turns, but you finally made it to the series finale! Like How I Met Your Mother, you just had to know how the story ends—even if you didn’t agree with it. In the end, “A.D.” ends up being Spencer’s evil twin sister, Alex Drake, who was living across the pond! The show used everyone and their dog to be the masked blackmailing villain known as “A.” or “A.D.” and now we finally have our answer.

And Alex would have gotten away with it, too, if it hadn’t been for that meddling Jenna, who realized that Spencer’s evil twin was posing as her for the longest time because she wanted her “perfect” life. On the bright side, Ezra and Aria got married and are adopting; Alison is still a teacher (with attitude) and a mother of twins with wife Emily; Hannah is also expecting and Spencer is free of her evil twin. In the end, Mona got the last laugh and made it seem like the cops arrested Alex and Mary Drake (her and Spencer’s biological mother), but really that was a decoy so that Mona could trap them underground in a large French dollhouse. Does she plan on keeping them forever? For sure! Mona wanted revenge on the evil Drakes and she got it. Check mate. In the end, all the Liars got their happy ending in an unrealistic way that only Freeform could provide.

Some fans weren’t happy with the ending and thought it was a cheap way out. It was similar to the book, but instead, Spencer was the one with the evil twin. Fans were hoping for something more original or at least surprising, but in the end, the writers went with the evil twin scenario that got solved by a French poem—good thinking Toby!

It's the lie before the truth. Who is A.D.? #PLLGameOver Song: "I Know What You Did" by @michaelmceach

Is There a Pretty Little Liars Spinoff?

At the moment, there’s no Pretty Little Liars spinoff in the works, but there’s definitely a possibility of it happening. In the last scene, four girls are asleep inside and wake up to realize that their friend Addison Derringer (the student in Alison’s class) is missing! Here we go again? One suspect in mind already is Alison, since she had an almost threatening conversation with Addison earlier about a subject discussed in class. Could Alison really kidnap someone else’s child? Anything is possible in that town! The show has already had a spinoff—Rosewood—which got the axe after only two seasons, which is why Hannah’s then boyfriend (now husband) came back.

After the appropriate amount of time, the cast would love to come back (including the guys, who would want the show on Netflix for better deaths and sex) and the show’s creator, Marlene King, is more than ready for a reboot.

“These are such beloved characters who are like extended family members, so I always say, never say never,” teased executive producer, Oliver Goldstick to Variety.” Better yet, executive producer Joseph Dougherty added, “What I’d like to see is each writer do their own individual version of what the reboot-ification should be. Why have one PLL when you could have half a dozen or so?”

For now, it’s the end of an era, but with reboots being the new normal, we have a feeling we will be seeing another set of Liars very soon.

We are still so sad over the #PLLFinale!! Can't believe the series is OVER! ?? Who was your FAVORITE character? Tell us BELOW ⬇️⬇️ #pllendgame #pllgameover #pll