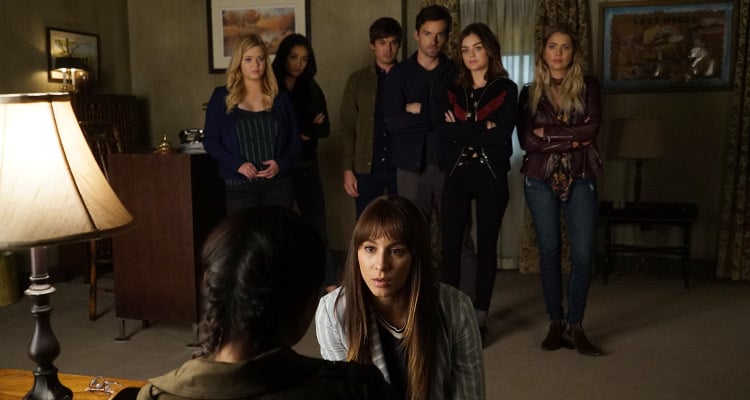 It’s official! Your favorite series, Pretty Little Liars is coming to an end. Fans of the series have mixed feelings about the show because, on the one hand, we will finally find out who A.D. is in Pretty Little Liars, but on the other hand, it’s bittersweet saying goodbye after 7 seasons.

The last episode of the Pretty Little Liars series will air on June 27, 2017. Since the last episode of the series will air next Tuesday, there is a ‘Pretty Little Liars A.D. Theory’ keeps creeping up, and people are coming up with their own scenarios to uncover the identity of A.D. The series finale episode will be two-hours long, where all the burning questions will be answered and all the dirty secrets will finally be revealed.

Freeform has officially released the Pretty Little Liars finale promo. Besides hinting at who A.D. is, the promo also teases some trouble in paradise for one couple. Who could that be? It shows that Ezra (Ian Harding) and Aria (Lucy Hale) are walking down the aisle, but it looks like Aria may be a runaway bride, as it looks like she might be getting cold feet!

There's no looking back on this week. Weekend, here we come. ⚡️ #PLL #PrettyLittleLiars

The promo also showed Melissa (Torrey Devitto) returning and Wren (Julian Morris) shooting somebody. Fans can also see something going on between Addison (Ava Allan) and Jenna (Tammin Sursok). In the second last episode of Pretty Little Liars, viewers of the show finally found that Mary Drake (Andrea Parker) killed Dunhill (Huw Collins), as well as Jessica DiLaurentis (Andrea Parker). However, it turns out that Mona (Janel Parrish) was the one who killed Charlotte! Her recovery was all pretentious and she wanted to get out to further ruin the girls lives. Talk about a vendetta!

Mona was the one who got to know about it and due to her confrontation with Charlotte, she accidentally killed A. The ending scene of the episode showed Uber A or A.D. driving away along with a bunch of Liar dolls placed in the seat next to him/her. Now, the only mystery that remains to be solved is to see what the villain has planned for the liars in the last episode, which is titled, “Til Death Do Us Part.”

The series finale episode of Pretty Little Liars finale will air next Tuesday, June 27, 2017, on Freeform. Rumor has it, wiewers can expect to see all the drama and the mystery plots unfold in the first hour and a half! The final half hour of the show will reveal all the star casts, and happy endings.

Mona, girl. What are you up to?! #PLLEndGame Sneak peek photo from tomorrow's ALL NEW #PrettyLittleLiars.

When Shay Mitchell was asked to spill a little about A.D. she said, “You know, you just never know. It could be Emily. It could be Pam Fields. I am really excited for people to find out who it could be,” she hinted. When asked to describe the finale in three words, the actress said, “Memorable, intense and heart-warming.”

Excitement is definitely building in the air as people are dying to know who the mystery person will be. We know many of us have had sleepless nights trying to figure out who A.D. is, and the series has kept us guessing for seven seasons! Now, there’s only a week to go and all our questions will be finally answered once and for all. Are you excited for the series finale of Pretty Little Liars? Or are you upset that the series is finally coming to a close? Let us know your opinion in the comments section below! In the meantime, feel free to watch the Pretty Little Liars finale preview below.