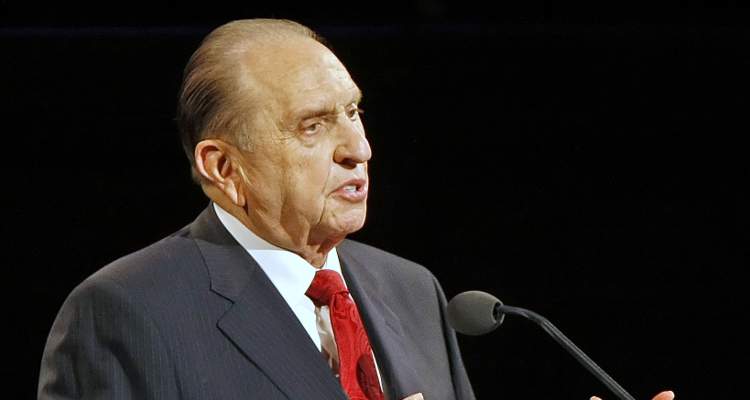 The world is in shock after reading the news that Thomas S. Monson passed away. The 16th President of the Mormon Church reportedly died on Tuesday, January 2, 2018. To remember the man who oversaw the religion for almost nine years, we compiled a list of 10 President Monson’s quotes.

President Thomas Monson died in his Salt Lake City home at the age of 90. For more than five decades, he served in various top church leadership councils. Members of the church will definitely miss him.

A statement released upon his death read, “Mr. Monson served as president of the Church since February 2008 and leaves behind a legacy of service and good works.”

In Monson’s memory, we compiled a list of some of his most inspirational quotes.

1.  “Christmas is the spirit of giving without a  thought of getting. It is happiness because we see joy in people. It is forgetting self and finding time for others. It is discarding the meaningless and stressing the true values.”

2.  “Choose your friends with caution; plan your future with purpose and frame your life with faith.”

3.  “Perhaps the surest test of an individual’s integrity is his refusal to do or say anything that would damage his self-respect.”

4.   “The past is behind, learn from it. The future is ahead, prepare for it. The present is here, live it.”

5.   “When faith replaces doubt, when selfless service eliminates selfish striving, the power of God brings to pass his purposes.”

6.   “Reading is one of the true pleasures of life. In our age of mass culture, when so much that we encounter is abridged, adapted, adulterated, shredded and boiled down, it is mind-easing and mind-inspiring to sit down privately with a congenial book.”

8.   “I’m a great believer that the Lord provides us specific experiences to prepare us to deal with some of the challenges that we’re going to encounter in our own period of service.”

9.   “Find someone who is having a hard time, or is ill, or lonely, and do something for him or her.”

10.  “Never delay a prompting. When you honor a prompting and then stand back a pace, you realize that the Lord gave you the prompting. It makes me feel good that the Lord even knows who I am and knows me well enough to know that if He has an errand to be run, and He prompts me to run the errand, the errand will get done.”

Our prophet, President Thomas S. Monson, passed away peacefully in his home surrounded by family. . See link in bio for more information.