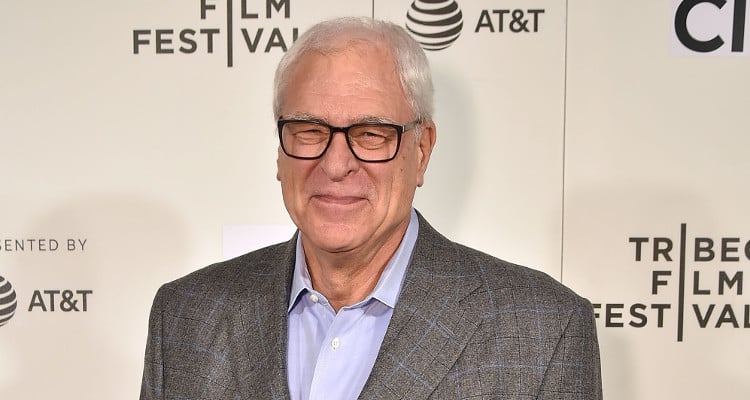 Phil Jackson is in the limelight for all the wrong reasons right now. The 71-year-old former coach who is now the president of the New York Knicks recently gave an interview confirming the news that one of the most promising players, Kristaps Porzingis, might be traded. If you are interested in knowing more about the New York Knicks’ president, keep reading Phil Jackson’s wiki.

On Wednesday evening, Phil Jackson confirmed in an interview that several teams have contacted him to trade one of New York Knicks’ best players, Kristaps Porzingis. Jackson said, “We’re getting calls. As much as we value Kristaps and what he’s done for us, when a guy doesn’t show up for an exit meeting, everybody starts speculating on the duration or movability from a club.” He further added, “So we’ve been getting calls and we’re listening, but we’re not intrigued yet at this level. But as much as we love this guy, we have to do what’s good for our club.”

When asked why they are ready to trade Porzingis, Jackson replied, “The future, you know, what it brings, does it bring us two starters and a draft pick or something that’s even beyond that? [That’s] something we have to look at as far as going down the road. We know what he is. He’s a unicorn and he’s special.” There are speculations that Jackson is likely keen on trading Porzingis because, apparently, he did not show up to his exit interview after the season.

Basketball fans everywhere are questioning Jackson’s motives. New York Knicks fans are pretty shocked that Jackson would trade one of the best players on the team. Well, we can just hope that he does not go through with it and he decides not to trade Porzingis. Keep reading f you want to know more about Phil Jackson.

Here's the full Phil Jackson interview that was aired on MSG Networks. #FIREPHIL

Born Philip Douglas Jackson on September 17, 1945, Phil Jackson’s age is 71. He was born in Deer Lodge, Montana to Charles and Elisabeth Funk Jackson. His parents were Assemblies of God’s Ministers and his father preached in church on Sunday mornings, whereas his mother spoke on Sunday evenings. Jackson’s father later became a ministerial supervisor.

Phil Jackson’s family included his parents, two brothers, and a half-sister. They grew up in a small rural area of Montana with strict laws enforced, where dancing and television were prohibited. In fact, the first time Jackson saw a movie was when he was a senior in high school. He did not go to a dance until he was in college. Growing up, he thought he would follow in his parents’ footsteps and become a minister.

In 1967, Jackson walked down the aisle with his first wife, Maxine. However, the couple got divorced in 1972. Two years later, he got married again, this time to June Jackson. Their marriage also ended in divorce, which was finalized in 2000.

In 1999, Jackson started dating Jeanie Buss, who is the daughter of Lakers owner, Jerry Buss. The couple got engaged on January 3, 2013. However, they never ended up getting married as, on December 27, 2016, Jackson announced that their engagement was called off. Phil Jackson has five children: Elizabeth, Chelsea, Brooke, Ben, and Charlie as well as eight grandchildren.

Phil Jackson’s Net Worth and Salary

Phil Jackson has given everything he has to basketball. With his hard work throughout the years, it comes as no surprise that Jackson’s net worth is estimated to be $50.0 million. He is a retired NBA player and was a former coach of multiple basketball team before becoming the New York Knicks, president. His estimated salary is expected to be $12.0 million. Jackson even owns two houses, one in Lakeside, Montana, and the other in Playa del Rey, Los Angeles.

His Journey to Becoming the New York Knicks President

Okay, so after watching this brief Phil Jackson interview, according to his own words I can assure you two things: – 1: The asking price for Kristaps Porzingis from NU is pretty large (Two good starters, and a top 4 pick) and Phil said still values Kristaps highly, says that they know they have a "unicorn" but wants whatever is best for the team. (Which I think that Kristaps is, of course, but this is just saying if a crazy deal comes along then Phil will probably take it for the betterment of the team) – 2: Regardless of whatever you see on Twitter or any reported rumors, Phil himself said that the Knicks are listening to calls, not trying to trade away Porzingis. Obviously, the possibility of Porzingis being traded greatly increased by the Knicks even saying he was available, but the asking price is huge, once again according to him, unless the team offering is giving NYK two good starters and a top 4 pick (for Josh Jackson), then it won't happen (knock on wood, you never know with Phil) – Also, he stated that Melo has told him he wants to stay in NY. And, considering Melo's no trade clause, with Anthony having the last say on any trade, he will be staying in NY, unless I guess maybe a team like Cleveland could change his mind. – "I think we know what we're doing." Phil, I really hope you know what you're doing.

Jackson was immensely passionate about basketball and, while in high school, played varsity basketball before going pro. The former NBA player’s professional career lasted from 1967 to 1980.He then tried his hand at coaching for various teams including the Chicago Bulls, Los Angeles Lakers, New Jersey Nets, and New York Knicks. Phi Jackson is considered to be one of the greatest coaches of all time, and has 11 NBA titles as a coach. Furthermore, he has won two championships as a player for the Knicks in 1970 and 1973. In 2007, he was inducted into the NBA Hall of Fame. He has been the New York Knicks’ president since 2014.