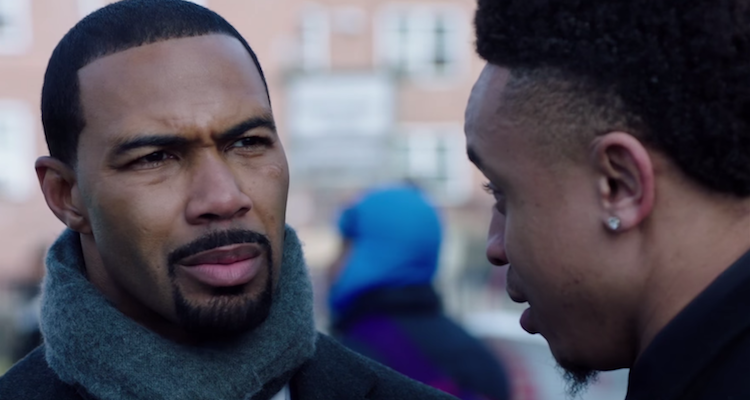 On Sunday’s episode of Power, a bad guy’s number came up, but before you find out more, here’s fair warning that there will be some exciting Power s04e09 spoilers ahead! Be sure to catch up on episode 8 before you read on! Starz’s drama is gearing up with more action and suspense that you won’t want to miss. Here’s what happened in last night’s episode.

The morning after having an affair with Tasha, Silver got a surprise visit from Tasha’s husband. Ghost questioned Silver about Proctor, wondering if criminal charges were filed against him. Ghost sees a woman’s earring on the ground, adding to the suspense of the situation.

When Tasha talks with Keisha, Silver is still on her mind. Raina interrupts their conversation, talking about being over Tariq and the bullying at school. During their conversation, Tasha spots bruises that Tariq left on Raina’s arm, but when she asks Raina about it, she lies.

Rashad, Tate, and Ghost meet up to discuss finding a good spot for a club in Queens, but Ghost is surprised when Tate reveals he invited Dre to their meeting. When Tate walks away, Ghost aggressively corners Dre, demanding to know what happened with Tommy, the meeting with the Jimenez brothers, and the deal about the Toros Loscos’ territory. Dre tells all.

If Tommy doesn’t hear back, he plans to start a war. Dre told the crew about this news and they were frustrated, believing the whole ordeal began because of Tommy’s short temper. Dre and Cristobal regroup privately when the rest of the crew leaves. Dre confesses that he didn’t know having Julio killed would lead to this.

Tommy wants to know whether Teresi is really his father, and Ghost tries to redirect his thoughts to the Jimenez brothers. The two agree to meet with the Jimenez’s. After the meeting, Ghost threatens to expose their organization and gives them a day to decide.

Dre and Cristobal meet Diego to stop the war by negotiating. Tommy soul searches and tries to find out the identity of his father. After investigating, he finds out Teresi is his father. He doesn’t take it well.

Tariq is back with the wrong folk but ends up walking in on one of the guys trying to assault a woman they’re robbing. When Tariq yells for Brains to make his friend stop, the woman now knows one of their identities, so they kill her. Tariq runs out and tries to find out about going back to school.

Sandoval runs into Saxe, trying to make sure they’re still on the same team. Saxe covers himself by agreeing but later finds out that Sandoval came to Donovan’s house, probably to kill him. Angela thinks Sandoval is a mole. Saxe keeps playing both sides but news breaks that he’s baiting Sandoval. Sandoval eventually cracks and spills everything, but midway through their exchange, Angela turns off her wire.

Proctor, Ghost, and Tommy meet up to find out what Sandoval knows. After trying to find a way to deal with the situation, Sandoval is killed as he’s being prepared for his transfer. Maks, Saxe, and Angela find him dead in his room… Angela was in on it.

David Fumero, who played the late Mike Sandoval on the show, dished on some Power 2017 spoilers. He mentioned that other characters are still about to die before the season ends, but he didn’t say who. He did say that Ghost and Tommy will survive: “They will survive because they always do. I just don’t know. I would read episodes sometimes and ask the question, ‘How did they get out of this one?’ Courtney likes to say, she writes them out of a corner. And that’s exactly what they do every time.” That being said, Ghost might be going dirty again. In episode 9, Ghost will realize he’s getting played in a new business deal, so he will begin to play dirty to get what he wants. Angela will eventually meet her new boss, Dre will stir up some tension with Tommy, Tommy will get more proof about his family, and a bad situation will take place with Tariq.