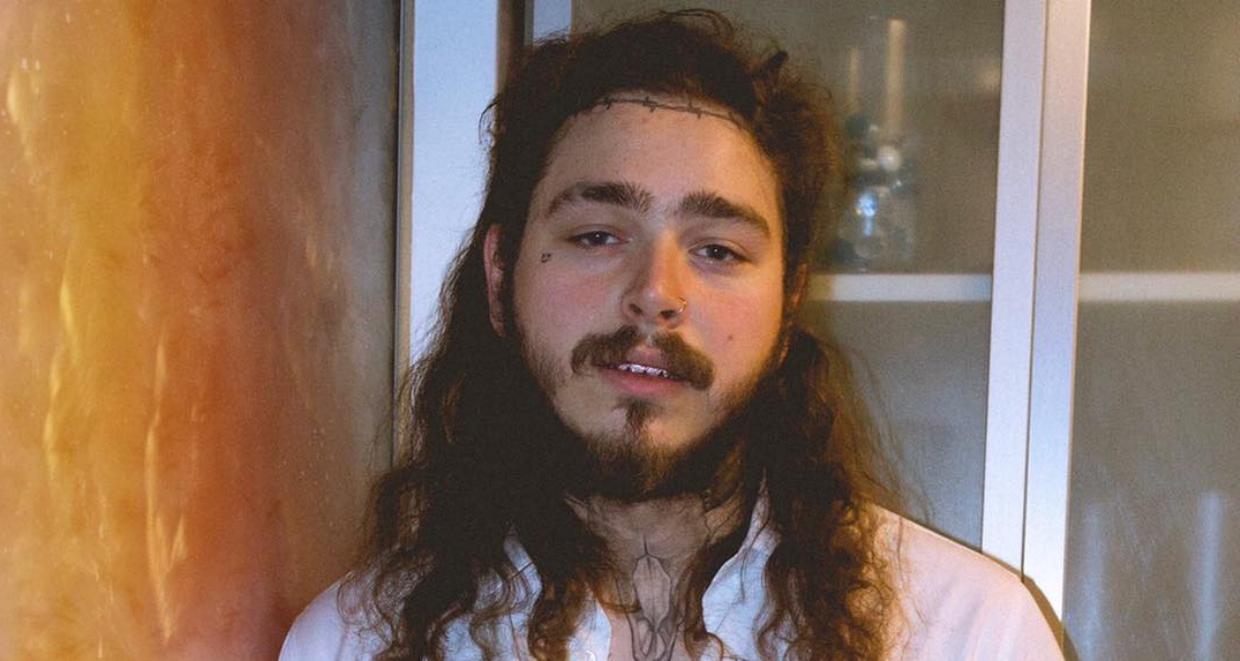 With an estimated net worth of $8.0 million, rapper and songwriter Post Malone has proven that race has nothing to do with being a successful rapper in today’s world! The 22-year-old has made it big with his talent, his lyrics, and his love for everything luxury—and he’s just getting started!

By no means did Post Malone come from the so-called “Hard Knock Life” many other famous rappers stemmed from, but he’s certainly earned his own way to the top! He’s making stacks now through his music—and he’s certainly not shy to flex it all!

His real name is Austin Richard Post, and he is not your regular rap prodigy with a past. Coming from a well-to-do background, he always took a shine to all things luxury!

Born Austin Richard Post in Syracuse, New York, on July 4, 1995, Post Malone’s age is just 22. He moved to Texas when he was an eight-year-old boy.

Malone’s father, Rich Post, was the assistant director of the concessions stand for the Dallas Cowboys. He has been associated with the organization for over nine years. Needless to say, he did very well for himself and his family, and Post has his father to thank for his comfortable upbringing.

One can only imagine how lucky a boy might feel to be so close with one of the biggest names in the NFL. There were also some financial perks that definitely came from working for the company!

As a young boy, Malone became interested in music (mostly from his dad who started out as a disc jockey). Post then became inspired to learn the guitar after getting hooked on the hit video game, Guitar Hero. Today, he is one of the top hip-hop stars on the scene and it only seems like his success is continuing to skyrocket.

Post Malone’s net worth in 2018 is estimated at $8.0 million. This is pretty impressive, considering that he began his career not more than just three years ago! 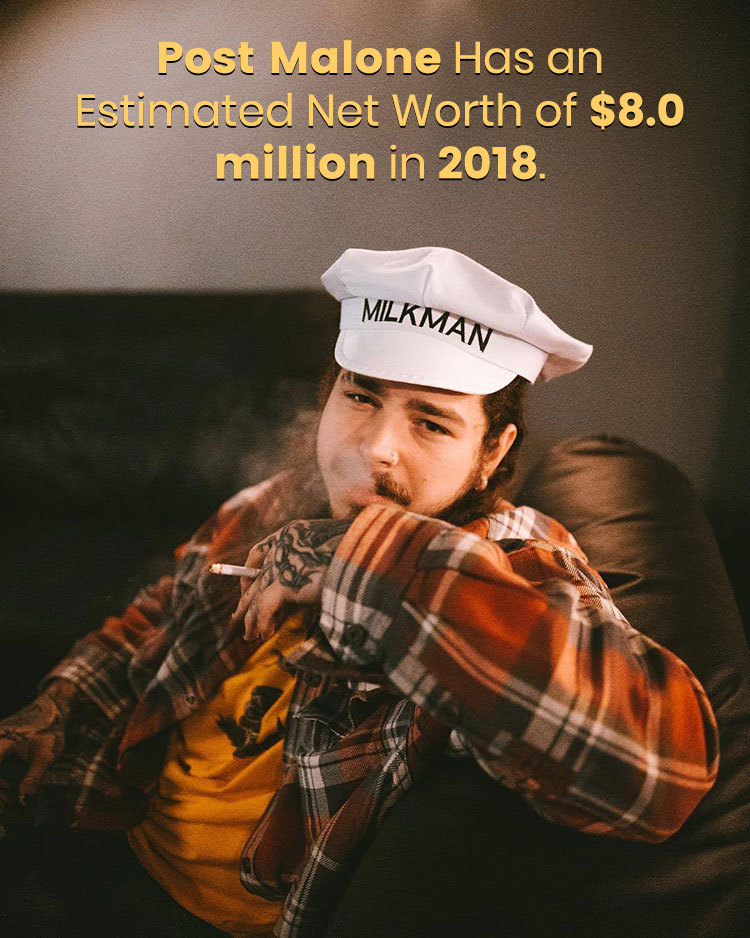 Post Malone Has an Estimated Net Worth of $8.0 million in 2018. Credit: Facebook/Post Malone

The rapper has not only been earning wealth through his songs, but he has also cashed in through some big endorsements!

Malone has made it on Forbes’ Hip-Hop’s Future Moguls: The Class of 2018 list. And people seem to agree!

The rapper is a self-made artist and has gone from being rejected by a band to becoming one of the best in the current rap scene. He achieved this all in just a few years time.

His debut album, Stoney, received a double platinum certification by the RIAA. And his song, “White Iverson,” has received quadruple platinum (sold over four million copies) and peaked at No. 5 on the R&B/Hip-Hop chart in the U.S.

We’re sure he’s earned millions through his album sales and online distribution. With the average price of $12.00 per album, it looks like Post Malone has easily earned a cool $20.0 million plus through the overall sales of Stoney alone. 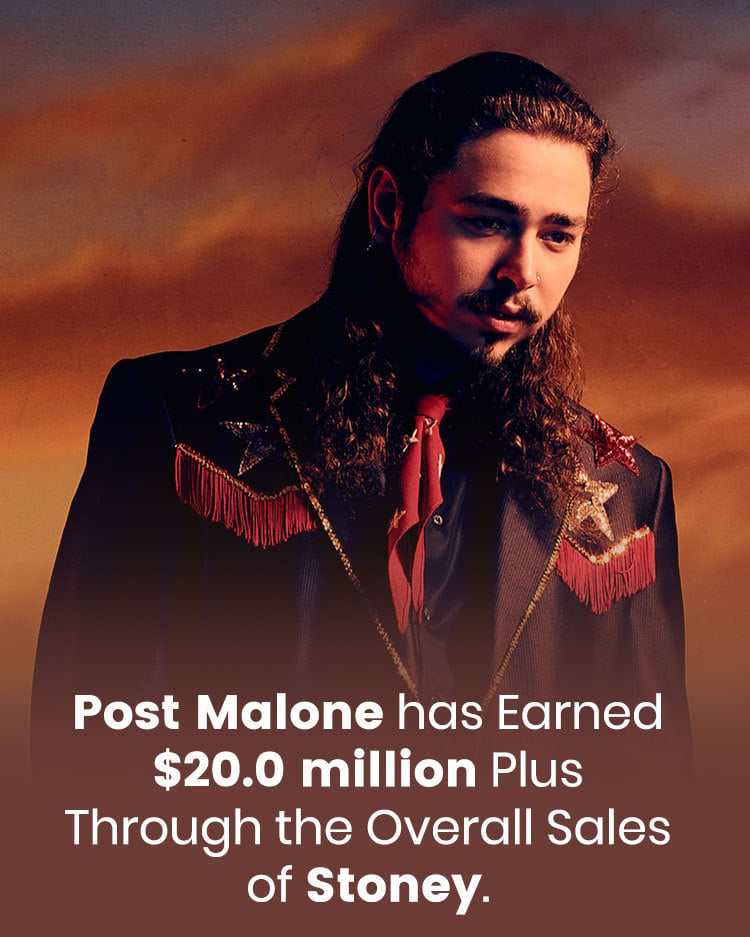 Post Malone has earned $20.0 million plus through the overall sales of Stoney. Credit: Instagram/postmalone

Malone is currently signed to Republic Records. He has been with them since the beginning of his career as a hip-hop artist in 2015.

Although it is unclear as to how much he cost the record label, Post Malone said that they gave him “a lot of money!”

Even the rap star’s signing bonus has been kept under wraps. But looking at the trend, it’s safe to say that he could have received $2.0 to $5.0 million as signing amount.

The song, “White Iverson,” was released independently before Republic Records could get a hold of the artist. It was then re-released through the label and garnered over 20 million streams on Spotify and a staggering 40 million on SoundCloud.

On YouTube, the song has received a mind-blowing 556 million plus views! Millions of dollars just keep pouring in! More like close to $1.5 million!

Malone was always a luxury-lover. He would reportedly wear $1,000 Versace shoes to school and would spend his money on everything designer and international.

His latest single, “Psycho,” featuring rapper Ty Dolla Sign, has peaked at No. 2 on the hip-hop chart. It has gone platinum since its release on February 23, 2018.

Post Malone favorite beverage is Budweiser’s Bud Light, and the endorsement couldn’t have come sooner to the rap star. 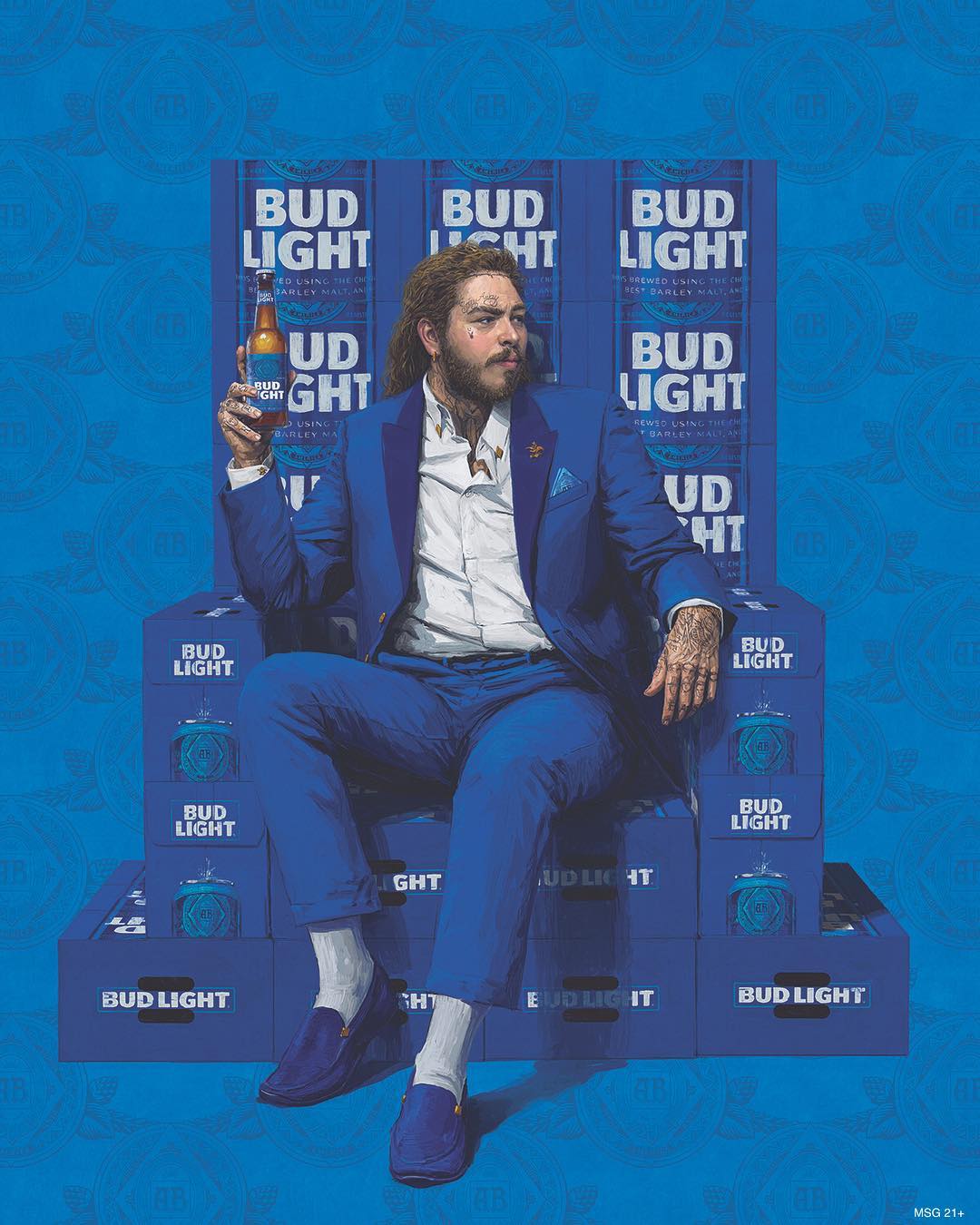 Malone and Bud Light signed a deal back when he was the “White Iverson” fame, and the company even brought him onboard their infamous Dive Bar Tour.

They love him so much that he even has a Bud Light refrigerator in his home! Is it possible he gets free stock for it, too?

By 2016, Post Malone had become a legit artist. And Forbes reported that he grossed over $1.0 million in revenue through his tour that year.

In social media endorsements, the rapper seems to promote clothing and accessories brand Zumiez on Instagram.

He was also seen doing an interview with luxury wine brand Luc Belaire while holding a glass of their best drink! Liquor brands just love him!

The automobile company Cadillac also teamed up with Post Malone. You can see the rapper on IG doing carpool karaoke with the outstanding sound system the car offers.

The international star was also associated with Easy Times, a coffee shop known for their weed! Malone was seen promoting them in a video by telling his 8.9 million followers that they had the best weed across borders!

Post Malone sure loves to flex his money alright, but he’s not dumb about it! He is known to promote his own merchandise and sells some of his favorite clothing styles and accessories on his website.

The rapper sells beer bongs, T-shirts, beer glasses, his music CD’s, and caps through the online store. And if you want to get on this “brand” wagon, then there’s another website coming up soon called Post Malone Shop!

If you’ve heard of Beerbongs & Bentleys, then you’ve got to be wearing the merch, too! You can head over to Post Malone’s online shop to get the B&B combo package, which is priced at $50.00 a pop.

A famous up and coming rapper like Malone is bound to have a few things to his name, and the luxury-loving artist is definitely not behind in this race! Be it his jewelry, cars or his home, and even his tour bus, the man does not shy away from a little flexing!

Taking a Shine to Bling

Malone has had an affinity towards bling from the very beginning. It seems like his go-to brand is Angel City Jewelers.

He has been associated with them for some time now. And it appears they are the ones hooking him up with his signature pieces.

The rapper is seen wearing a diamond-encrusted Hello Kitty chain, which he may have purchased from the same jewelry shop.

A similar-looking teddy bear chain on their online store is priced at $1,600. But we’re sure the Hello Kitty ones cost more than that!

He is also loaded with some blinged out Rolex watches. Almost all of them are diamond-encrusted with gemstone dials.

He also bought a jewel-encrusted Patek Philippe watch from the same jewelry shop. And these watches cost anywhere between $150,000 to $200,000.

Malone seems to be wearing their signature gold chains in three different sizes. A look at their combined price amounts to $15,000 to $20,000.

Additionally, he showed off a tiny solid gold shoe pendant, as well as a yellow gold and diamond bracelet. It looks a lot like the Cuban link bracelet the company makes, costing north of $20,000.

Post Malone’s love for everything custom-made has trickled down to his set of wheels as well! He has invested his millions in some very cool rides, which are made cooler by the luxe additions made to them.

His collection includes a Lincoln Continental, which West Coast Customs turned into an angel of the car world! It is now a white and gold beauty with gold rims, including gold accents across the body and a striking gold grill in the front.

He also bought a 1992 Ford Explorer. And while that seems like a regular buy, he added the Malone touch to it!

The Explorer now has Lamborghini style doors, 26-inch wheels with spinning rims, and new body paint. Its value went up from an approximate $1,700 to a whopping $73,000 plus.

The SUVs front grill has his name spelled out right under the Ford logo. What a way to own a ride!

In a video Jake Paul made, when he went to surprise Post Malone at his doorstep, he saw a Rolls Royce parked in the garage. Malone calls the Royce his “everyday car.”

In the same video, Jake Paul seems to have also revealed the rapper’s address. Even though Post Malone took it in the right spirit, it looked like his privacy was invaded!

Jake Paul showed up at Post Malone’s house when he wasn’t even wearing pants! He later issued an apology to the rapper, who accepted the heartfelt sorry!

He seems to live in Tarzana, Los Angeles, which was showcased in the Jake Paul video and some of Noisey’s YouTube videos.

The rapper also has a home in Utah, which cost him a cool $3.0 million. He said that he redid the place by putting an apocalypse shelter underground!

The 13,000-square-foot mansion is supposed to house around 30 bunk beds, a private compound for Post Malone and his girlfriend, Ashlen, and other super-futuristic stuff for when the world ends!

According to VirtualGlobetrotting.com, he owns a mansion in Encino, Los Angeles, which he seems to be renting. A home in the luxe area could cost anywhere between $1.6 to $5.0 million.

In addition to his homes, which showcase a closet full of sneakers (including a $1,700 pair of Christian Louboutins with gold embroidery), the rapper also has an affinity towards guns.

He showed off his collection to Rolling Stone, and it was beyond impressive. In fact, it’s almost obsessive!

Like a true musician, Post Malone has a very impressive guitar collection as well! He is the owner of the only Fender Telecaster guitar with a Louis Vuitton skin. He said he beat Bruno Mars into buying it!

In addition to the luxury string instrument, he also has a custom cream Gibson SG Triple Pickup ($4,286 to $6,000), a rhinestone-encrusted acoustic guitar, a Vox AC30 amplifier, and more!

The rapper also has another guitar which has his name inscribed on the fretboard!

Here’s how much Post Malone is worth compared to his contemporaries: